Ellen Lloyd - AncientPages.com - Legend tells Merlin's precious treasure is hidden in a cave at Dinas Emrys, in the mountains of North Wales.

Dinas Emrys is a unique and important ancient site. Not only is it mentioned in myths and legends, but the place is also of great historical importance.

Dinas Affaraon or Dinas Ffaraon (Fortress of Pharaoh) appears in Medieval Welsh literature and its original name is Dinas Emrys.

This mysterious and beautiful place is associated with dragons, Arthurian legends, Druids and historical events. Some stories tell this is where we can find the mythical city of higher powers.

Remains of the Iron Age hillfort that once stood there can still be seen, but what purpose did the building serve? Some historians suggest it was once a castle built by Llywelyn the Last (1223 – 1282) who was the last prince of Wales before its conquest by Edward I of England.

It is possible the castle once guarded the road to the mountain pass of Snowdon. The fortification had strong stone walls between 2.5 and 3 meters (8 and 10 ft) thick and archaeological excavations reveal that though the site is pre-Roman, it was inhabited in the Roman period. 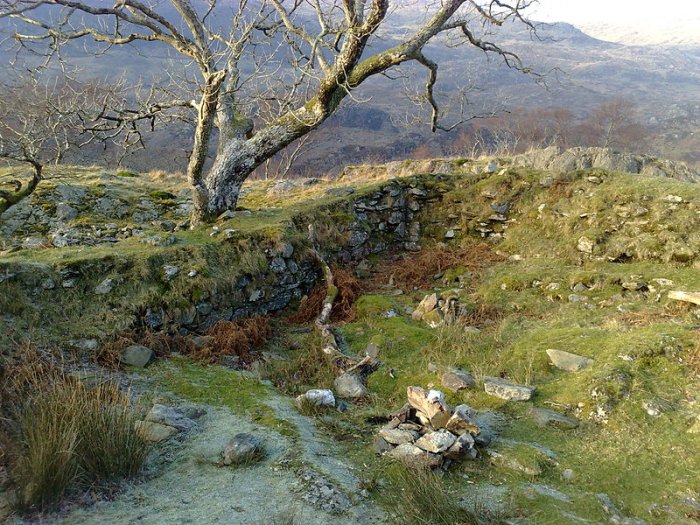 Ruins of what is considered to be an 11th Century tower at Dinas Emrys. Credit: Public Domain, CC BY-SA 3.0

“Amulets with ‘alpha-omega’ and ‘chi-rho’ monograms attest a Christian presence, though the Christian was not necessarily the chief householder.” ( Geoffrey Ashe - Merlin: The Prophet and his History)

Inside Dinas Emrys, there is evidence of iron-working and a pool. It has been suggested this was an artificial construction and the pool is mentioned in the popular tale of Vortigern and the dragons. As mentioned before on Ancient Pages, on the national flag of Wales there is a red dragon that most people associate with the battle of King Arthur and other ancient Celtic leaders. However, the Red Dragon of Wales dates back to Roman times.

It is believed that Merlin, a famous wizard mentioned in Arthurian legend and medieval Welsh poetry stayed for some time at Dinas Emrys.

As Geoffrey Ashe explains in his book Merlin: The Prophet and his History, "in later legend the belief that Merlin stayed at Dinas Emrys persists, though he is never said to have made it a permanent home. He left behind a golden cauldron containing treasure, hiding it in a cave and blocking the entrance with a large rock and a mound of earth.

The treasure is meant for a particular person, who is identified only as a youth with yellow hair and blue eyes. When he is near the spot, a bell will ring and the barrier will crumble as he sets foot on it. The bell has not rung yet. Treasure-seekers who have looked for the cave have been frightened off, it is said, by thunderstorms and other portents.”

Dinas Emrys And The Legend Of Vortigern

According to a legend, King Vortigern had his stronghold at Dinas Emrys. From a historical perspective, Vortigern is a very complex figure. Vortigern may have been King of Britons in the 5th century.

It is believed King Vortigern invited Hengist and Horsa, the legendary Anglo-Saxon warrior brothers and leaders of first settlers in Britain to help him fight the Picts and Scots. However, they revolted, killing his son in the process and forming the Kingdom of Kent. It is said that King Vortigern then took refuge in North Wales. 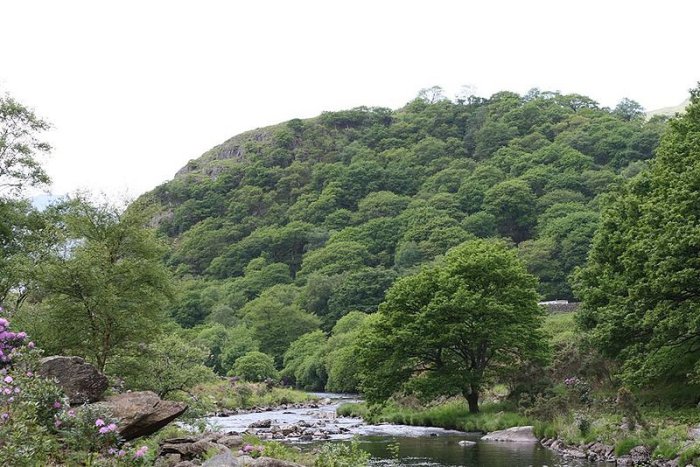 Dinas Emrys with the River Glaslyn in the foreground. Credit: Public Domain

According to the story in the ninth century Historia Britonum of Nennius, embellished by Geoffrey of Monmouth King Vortigern constructed a hiding place in Wales.

“Vortigern, driven to desperation, consulted soothsayers – by courtesy, magicians. They advised him to give up the attempt to control his kingdom, and instead to build himself an impregnable stronghold in some remote place, where he could at least survive. After considering several possible sites, he tried Snowdonia and picked out the hill-fort now known as Dinas Emrys,” Ashe writes.

However, things did not go as planned. The problem with the built towers was that they collapsed every morning. “Every time the base of the tower began to take shape, it fell to pieces, and all the materials vanished into the earth,” Ashe explains.

This continued for many weeks, until King Vortigern was given advice to seek help from a young boy not conceived by a mortal man. After searching for some time King Vortigern found a boy named Myrddin Emrys (Merlin Ambrosius) – his name possibly means ‘sea fortress of light’.

King Vortigern’s advisers told him that in order to build his tower, the boy must be sacrificed to appease the spirits of the hill. When Myrddin Emrys heard this, he laughed and explained to King Vortigern this was the wrong approach.

As Ashe writes, Myrddin Emrys “told Vortigern that the tower could not stand because beneath it there was a hidden pool in which lived two dragons (wyrms). Every night they rose up and fought, and their rising made the tower fall down. The dragon story has its roots in the ancient story of Lludd and Llefelys, sons of the sun god Beli. 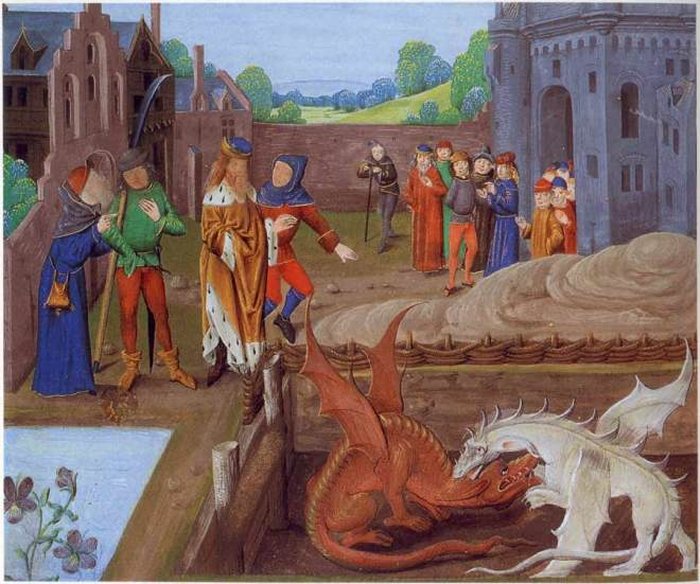 On every May Eve, King Lludd of Britain heard a hideous scream. No-one knew whence this scream came and it so frightened the people that it caused infertility, panic and mayhem throughout the land. Lludd sought help from his brother Llefelys, King of Brittany, who told him the scream was caused by two battling dragons. The British dragon (the red one, now on the Welsh banner) would scream when it feared it was being defeated by the alien white dragon.

Lludd captured both dragons in a cauldron filled with mead – one of our ‘medicines’, like for example peyote for other cultures – which they drank. They then transformed themselves (as apparently dragons did) into pigs, and fell asleep. Lludd wrapped them in a white silk cloth and laid their sleeping forms in the now empty cauldron under Dinas Emrys.

Merlin told Vortigern it was these dragons who had awoken, transformed back to dragon-shape and now fought each night to make a ruin of Vortigern’s tower. He explained that the red dragon represented the British people while the white dragon was the Saxon invaders he had brought into the country, and who were now laying it waste while he did nothing to stop them. Merlin called and the two beasts rose up and began to fight. The red dragon slew the white one which Merlin translated as the overthrow, in due course, of the Saxons and the subsequent demise of Vortigern.

The druid advisors had warned him that the fatherless boy must also be slain because he was a danger to the king and, in a sense, he was because he foretold Vortigern’s end and the reason for it.

After their battle the dragons disappeared and Vortigern went on to build his tower successfully although to no purpose in the end.”

After the tower at Dinas Emrys was completed, Merlin was free to go, but before leaving the place, he buried a treasure at the site. There are still people who search for the wizard’s treasure and it cannot be denied that beautiful Dinas Emrys remains a magical place of great historical and mythological value.

Geoffrey Ashe - Merlin: The Prophet and his History