Jan Bartek - AncientPages.com - A unique 8,400-year-old dog burial has been discovered in southern Sweden. It’s an extraordinary find because it is the oldest dog burial unearthed in the country!

The remains of the well—preserved dog - was found at an Iron Age burial site in Ljungaviken in Sölvesborg, Blekinge. The dog was buried together with a person.

Archaeologists have been interested in Ljungaviken since 2015, and they are currently carrying out one of the largest archaeological digs ever undertaken in the region. 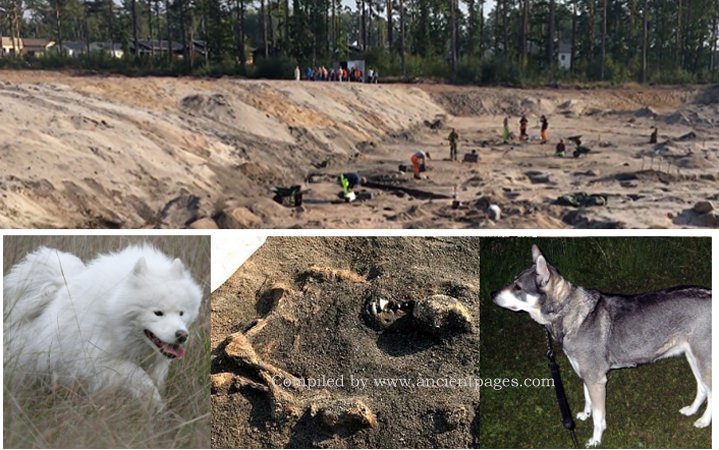 While excavating at the site archaeologists also unearthed grave goods that are believed to be valuable and sentimental possessions buried with the dead.

"This is the oldest burial find of a dog in the country. The dog is well-preserved, and the fact that it lies buried in the middle of a Stone Age building is unique," said osteologist Ola Magnell.

The discovery of 51 remarkably well-preserved houses in the mud, as well as fireplaces, pits, and post holes, reveals inhabitant of this place faced a natural catastrophe. Scientists say the Stone Age village was flooded by the rising sea about 8,400 years ago.

“The dog has not yet been removed from the grave, but this is set to happen later in the week and will be a delicate procedure,” Local Sweden reports. 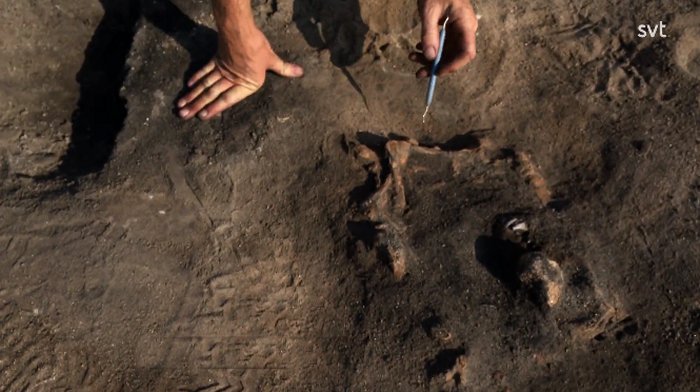 It's the oldest dog burial discovered in Sweden. Credit: SVT

"A find like this makes you feel even closer to the people who lived here," said Carl Persson, a project manager at Blekinge Museum. "A buried dog somehow shows how similar we are over the millennia, the same feelings of grief and loss."

According to Osteologist Ola Magnell of the Blekinge Museum, it’s much too early to determine what kind of dog species the animal belonged to. In an interview with SVT, Magnell explained the dog doesn’t resemble any known modern dog species. Based on previous studies of dogs from this period, It was most likely a  Spitz dog that can be compared to a Jämthund, also called the Swedish Elkhound. 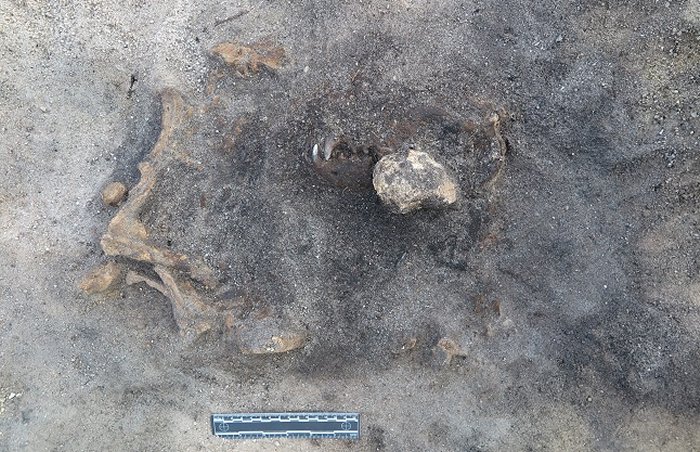 The dog burial is a unique discovery in Sweden. Credit: Carl Persson/Blekinge Museum

Although calm and affectionate with its family, the Swedish Elkhound can be dominant with other dogs and has a strong prey drive. Considering many hunters lived in the region it is logical to assume this kind of dog was very useful to people in their daily life.

Every pet owner knows how hard it is to lose his or her best friends, and our ancestors valued the company of our furry friends as much as we do. Animal burials have bee unearthed before in Sweden.

Between 1980-1984, Lars Larsson investigated Skateholm, Tullstorp in Skåne. At the site, there are sixty-five graves. Some of them are dog burials.

Scientists will now focus on removing layers of sand and mud to find out what more archaeological secrets Ljungaviken can provide us with.