Ellen Lloyd - AncientPages.com - About 200 years ago, seventeen concealed miniature coffins were discovered in a cave in Edinburgh’s Arthur’s Seat, Scotland. No-one knows who put the tiny coffins there and why.  It’s a curious find that to this day remains an unsolved enigma.

It all started in June 1836, when three Scottish boys who were out hunting rabbits discovered a small cave in the rock, hidden behind three-pointed slabs of slate. Concealed within were 17 miniature coffins.

According to Charles Fort, (1874-1932), an American writer and researcher who specialized in anomalous phenomena the coffins were only “three or four inches long.

In the coffins were miniature wooden figures. They were dressed differently in both style and material. There were two tiers of eight coffins each, and a third one started, with one coffin. 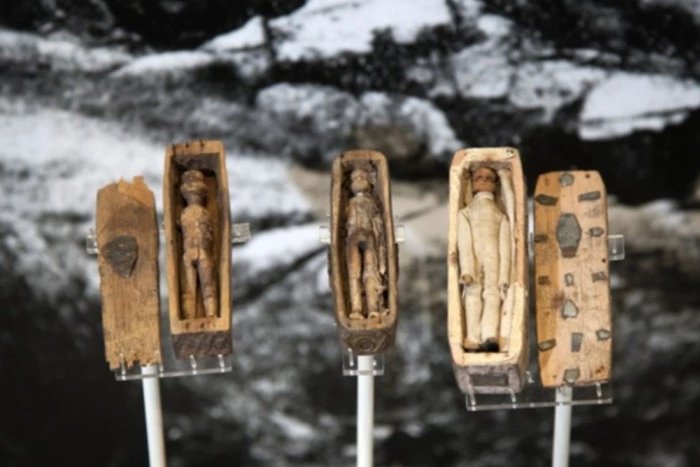 That the coffins had been deposited singly, in the little cave, and at intervals of many years. In the first tier, the coffins were quite decayed, and the wrappings had moldered away. In the second tier, the effects of age had not advanced so far. And the top coffin was quite recent looking.”

On July 16, 1836, the Scotsman reported several of the figures were either badly damaged or lost altogether as the decrepit-looking cache provided convenient fodder for the boys to pelt one another with. Fortunately, some of the coffins were still intact and they were sold to Robert Frazier, a South Andrews Street jeweler and private collector where they remained until being donated to the National Museum of Scotland in 1901. Only eight figures, in varying states of decay, survive.

In Whose Image Were The Carved Figures Made?

The human effigies were all dressed in different garments. Obviously, they must have been created to represent different individuals.
According to the Scotsman, the figures “were dressed from head to foot in cotton clothes, and decently laid out with a mimic representation of all the funereal trappings which usually form the last habiliments of the dead.”

Ever since the coffins discovered, experts and laymen alike have put forward a number of interesting and sometimes even incredible theories that attempt to explain who placed the artifacts in the cave and why.

Scotland has long been a country where many people were and some still are superstitious.

The miniature coffins are still an unsolved mystery. Image credit The National Museum of Scotland

Satanic spell-manufactory!’ cried The Scotsman, the first paper to report the tale, in an article published on 16 July 1836:

“Our own opinion would be – had we not some years ago abjured witchcraft and demonology – that there are still some of the weird sisters hovering about Mushat’s Cairn [sic] or the Windy Gowl, who retain their ancient power to work the spells of death by entombing the likenesses of those they wish to destroy.

Later different theories were presented. Some attempted to explain the existence of the coffins as a result of witchcraft while others suggested that they were perhaps kept by sailors to ward off death.

Another widely held belief is that each of the figures was designed to commemorate the victims of the infamous serial killers Burke and Hare. The murderous duo had ended the lives of precisely seventeen Edinburgh citizens less than a decade prior to the boys’ discovery on Arthur’s Seat.

According to the National Museum of Scotland, “the figures all appear to be made by the same hand, although it’s possible the coffins were crafted by two different people.

A close-up of two of Edinburgh’s mysterious miniature dolls. Are these intended to be the faces of two victims of the notorious bodysnatchers Burke and Hare? Credit: National Museum of Scotland.

Some of the materials and tools used – wood, iron embellishments, nails, a sharp, hooked knife – indicate the coffins could have been fashioned by a shoemaker.

The figures seem to form a set, and their upright bearing, flat feet, and swinging arms suggest they may have been toy soldiers. Their eyes are open, making it unlikely they were originally designed as corpses.

Some of the figures are missing their arms – perhaps removed so that they would fit in the coffins.

The fabric the little bodies are dressed in dates from the early 1830s, so they hadn’t lain buried for more than six years.”

Today, the remaining eight coffins and their contents are on display to the public at the National Museum of Scotland on Chambers Street.

The National Museum of Scotland