A. Sutherland  - AncientPages.com - In one of our latest articles, we presented Mama Ocllo, an important deity in the ancient beliefs of Inca people.

Today we write about Mama Cocha, known as ‘Sea Mother', Mother of the Waters’ (‘Laguna Madre’), whose powers were derived from the water. 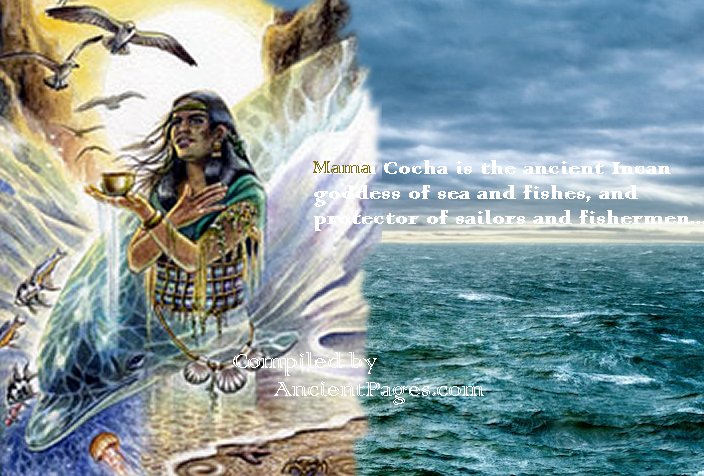 In the Inca beliefs, Mama Cocha is one of the four elemental, divine mothers; the others are  Mama Nina, the goddess of fire,  Pachamama, the goddess of the earth and fertility, who presides over planting and harvesting and can cause earthquakes. The latter is Mama Waira, who teaches the Inca the art of spinning. These four deities were worshiped as mothers of life because they ruled everything that was considered natural elements such as land, fire, air, and water.

All rivers, lakes, mountains, animals, plants, and meteorological phenomena possess such a spirit, according to the Inca. The word ‘mama’ added to the name of any animal, is used to designate a gigantic prototype of the species or closely associated with them.

Mama Cocha is the ancient Incan goddess of sea and fishes, and protector of sailors and fishermen exposed to dangers at sea. She is also responsible for providing plenty of fish, preventing storms, and calming the waters for their safety.

She is the wife of Viracocha, the God of Heaven, and mother of Mama Quilla, goddess of the moon and fertility and Inti (Inti Tayta), the Sun god. This powerful goddess has even unlimited power over all bodies of water, including rivers, lagoons and lakes, tides, and the ocean.

Who was the Sapa Inca?

Still, first of all, she has a unique relationship with the Andean sacred lake, Lake Titicaca, which is central to the Inca creation stories. Its waters are said to be the tears of the Creator, and from this sacred lake emerged the sun and the moon, Inkari, and Collari, who were the first mother and father of the Inka Nation.

Mama Cocha has always been particularly important to people living alongside the coastal regions due to proximity and daily dependence upon the sea.

As it was centuries ago and today, throughout the entire coastal territory of Peru, Ecuador, Colombia, and northern Chile, an ancient belief in the Inca goddess Mama Cocha remains in force in these places where fishing is essential for the economy and well-being of its inhabitants. That is why Mama Cocha is worshiped and esteemed with great devotion, hoping she can provide a good fortune in fishing, and give sufficient protection of coastal towns against devastating tsunamis.

Even the farmers have to worship and make offerings to Mama Cocha because she controls annual rainfall that affects crop health, and is beneficial for agriculture.

Rites of Mama Cocha have to be performed by women since this goddess gives relevance to her own gender, that is, to the feminine. The ceremony is organized every 8th of September and includes dances, music, and serving of food.

According to an old tradition, one way to worship the goddess of the sea is to bathe in its waters at midnight. The women who did it asked for health, beauty, strength, and fertility. Another tradition is held on the banks of lagoons and rivers, where believers bow to all the gods in order to invoke the great Mama Cocha.

This kind of ancient Inca rituals has survived to this day, being a source of inspiration for many new rites of this ancient culture.