A. Sutherland - AncientPages.com - The royal burial site at Sutton Hoo, a few miles from the Suffolk coast, East England, is the most famous of all Anglo-Saxon sites. It is mainly known for its outstanding funerary discoveries in Mound 1 shed light on the war gear of early seventh-century Anglo-Saxon rulers. 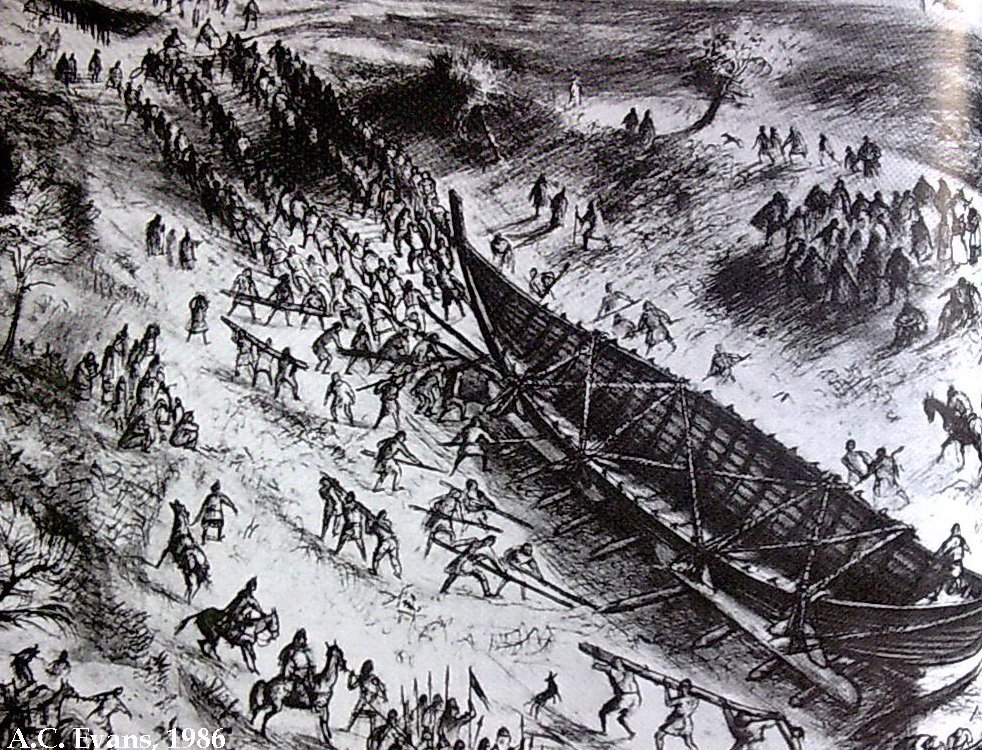 Artist interpretation by Alan Sorrell of the moving of the burial ship over to the grave. Image credits: A.C. Evans, 1986 via Archaeology of Britain.

In the summer of 1939, an amateur archaeologist, Basil Brown (1888 – 1977), made one of the most exciting discoveries in British archaeology; they found the tomb of an Anglo-Saxon who had been buried there in the early 600s.

In Mound No. 1 at Sutton Hoo, they found the tremendous ancient ship, and since then, the grave has been known as "The Sutton Hoo Ship Burial."

The Sutton Hoo helmet is a remarkable example of the Saxon craft. 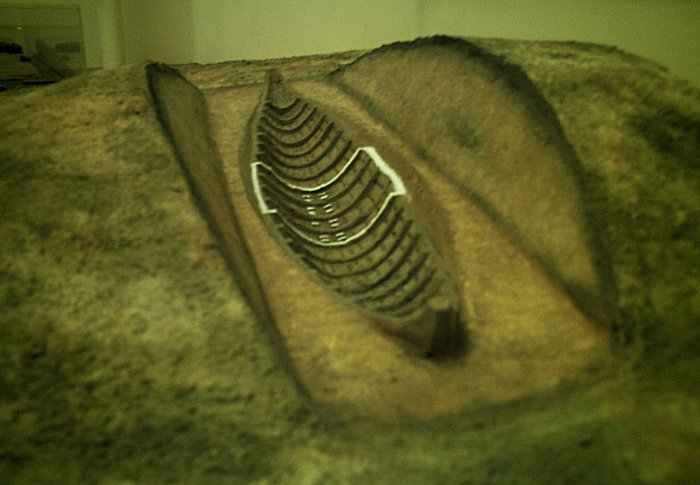 Model of the Sutton Hoo ship-burial 1, England. The placement of the burial chamber is marked white.Image credit: Eebahgum - CC BY-SA 3.0 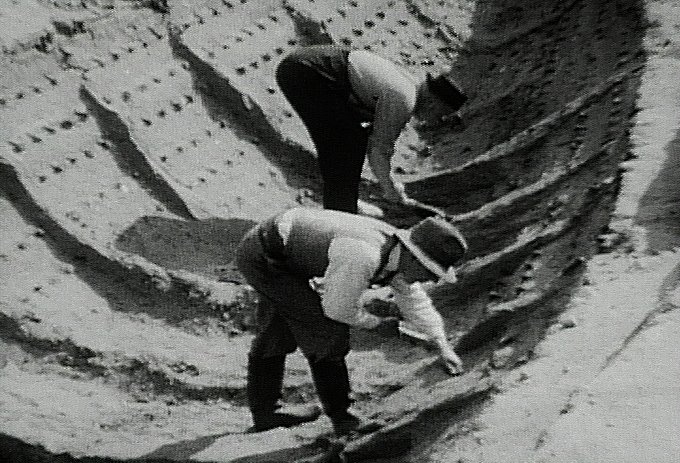 "The cap of the helmet was formed from a size piece of iron, and it is divided into ornamental zones, each with detailed engraved by the metalsmith who created it, due to the use of different metals."

Careful excavation gradually exposed the ship, which is 90 feet (27.432 m) long (the biggest, most complete Anglo-Saxon ship ever found). However, this rich ship's burial had one mystery: it was empty.

People wondered whether this could be a cenotaph, a symbolic burial, where the body had been lost. 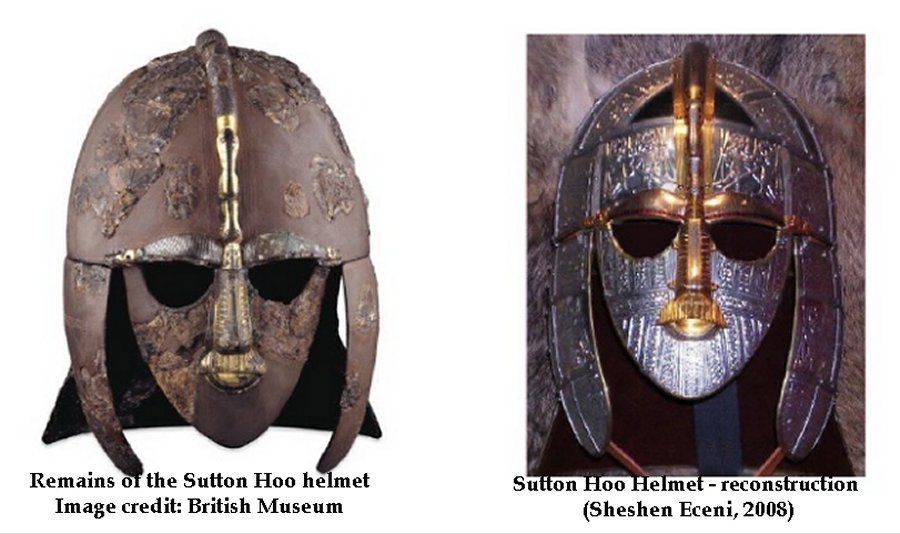 National Trust archaeologist Angus Wainwright has another theory suggesting that there was a body buried in the grave. However, the soil's special acidic conditions caused the body to dissolve. What you have to remember is that a ship is a watertight vessel. When you put it in the ground, the water percolating through the soil builds up in it, forming an acid bath, in which all these organic things like the body, leatherwork, and wood dissolve away, leaving nothing.

Seventy-eight years after the ship's burial was discovered, the researchers still speculate over who was buried in the mound. One of the proposed candidates could be Raedwald, the last great king of East Anglia (East Anglia) from the Wuffingas dynasty, the ruling royal family of East Angles until 749. The name" Wuffa" (Uffa) was the eponym for the Wuffingas dynasty.) Raedwald died about 625.

Merovingian gold coins and decoration on two silver spoons found in the grave were analyzed and revealed that the tomb belonged to the king who baptized. Still, later, he decided to return to paganism, which Raedwald himself did. 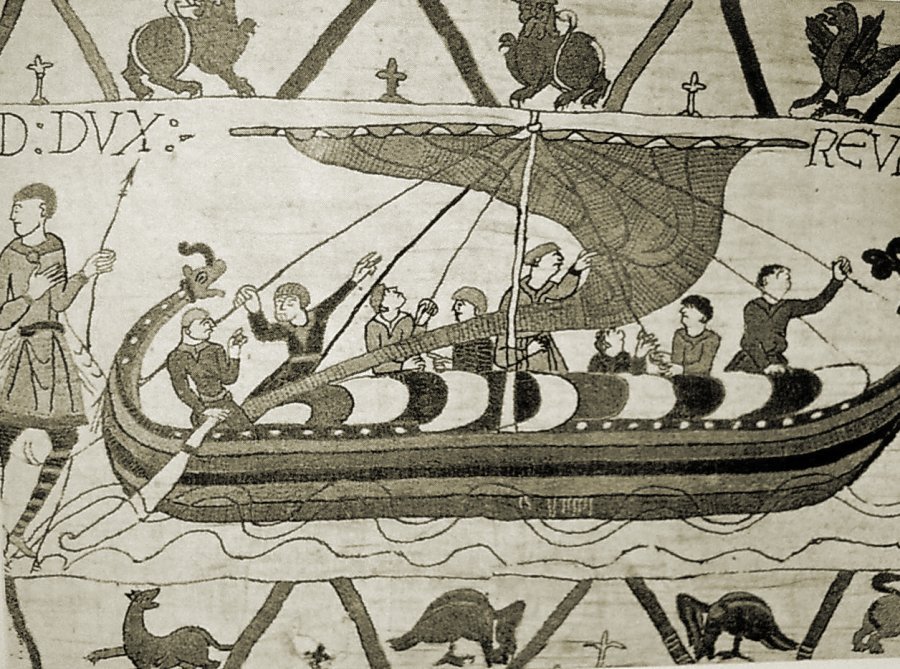 Long boat similar to the one found in Sutton Hoo. Image credit: The British Museum Press

As to the famous Sutton Hoo helmet, it is widely believed that it belonged to king Raedwald, who was not only the King of East Anglia but the king of all the kings of Britain.

Until the 1939 discovery of the ship burial at Sutton Hoo, it had been taken for granted that the oldest surviving long poem in Old English, "Beowulf," was pure fantasy.

The Sutton Hoo findings prove the historical value of many descriptions and references in this great epic poem.

This fact proves that trade existed between England and Scandinavia.