Ellen Lloyd - AncientPages.com - In ancient Egypt, pharaohs were considered to be both divine deities as well as mortal rulers, but natural disasters and climate change could lead to serious problems for these powerful Egyptian rulers.

As a pharaoh, you had to know who to cope with severe weather changes. A pharaoh who handled a famine or drought badly could expect to face political uprisings.

Famines were very common in ancient Egypt, but historical records reveal rulers failed to understand how vulnerable they were to environmental devastation right up until the day their empire collapsed. 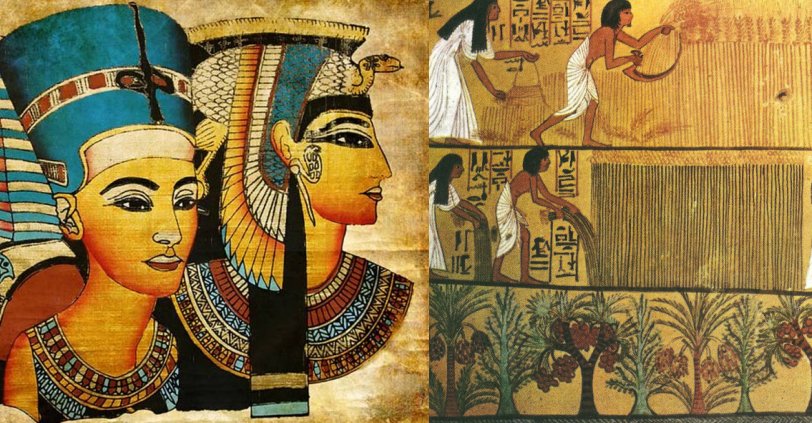 A study published in the journal Nature Communications combines ice core dating of ancient volcanic eruptions with papyrus records of uprisings to show that each time there was a volcanic eruption during Egypt’s Ptolemaic period, it led almost inevitably to unhappiness and revolt.

“It shows there are real political and societal consequences to environmental changes like global warming and disasters,” said Joseph G. Manning, a historian at Yale University who led the study. “We act as if these things won’t affect us. But when you see how advanced civilizations of the past could at times be pushed over the edge by events like these, it suggests that we should be treading lightly on the Earth.”

During the Ptolemaic age from 305 to 30 B.C. Egypt was flourishing. Many important historically important places and buildings were the reasons why Egypt soon became a significant cultural and military powerhouse. The Library of Alexandria was created and people built the shining lighthouse — one of the Seven Wonders of the Ancient World.

Unfortunately, the Ptolemaic Empire was also deeply dependent on crops watered by the summer flooding of the Nile. During years when that flooding didn’t happen, harvests were devastated and there were famine and civil unrest. Ptolemaic kings were unaware that those dry years were often caused by volcanic eruptions, sometimes as far away as the other side of the world, that sent up sulfates into the atmosphere and caused dramatic changes to global weather patterns.

In the new study, researchers asked an expert on n monsoon weather to connect the volcanic eruptions to the water levels of the Nile. Then, scientists compared data with meticulous ancient records of the Nile’s water levels and papyrus records of political upheaval. The results were obvious.

The science used statistical modeling to show that the frequency with which volcanic eruptions matched up to political revolts put it far beyond a matter of chance.

“The lesson I draw from all of this is how much we need to have humility. We’re talking about civilizations that lasted a long time, that were just as smart and able and enterprising as we are. And yet, they were sometimes dealt devastating blows by the environment. Sometimes they were able to overcome them, but sometimes they were overcome by them,” Michael McCormick, a medieval historian at Harvard University said.

A papyrus text from ancient Egypt describes a famine, which scientists now believe was caused by volcano-induced climate change. (University of Warsaw and Yale University)

Some Egyptian leaders appear to have conducted disaster relief better than others, possibly forestalling revolts in their time.

One of them was Cleopatra. One of the greatest volcanic eruptions in the last 2,500 years occurred during her reign, but there is no record of political revolt.

The natural disaster led to plague, famine, and drought, but Cleopatra acted quickly and undertook speedy steps toward disaster relief which could have saved her from a revolt.

In the end, however, it did not save her nor the Ptolemaic Empire. In 31 B.C., when the Romans defeated Cleopatra’s navy, her empire had already been weakened for years by the Nile’s failing waters, famine, and plague. Soon after, she committed suicide.