Pueblo Indians were a peaceful people who managed to endure much after New Mexico's colonization in 1598. They succeeded in overthrowing Spanish rule in New Mexico for 12 years. 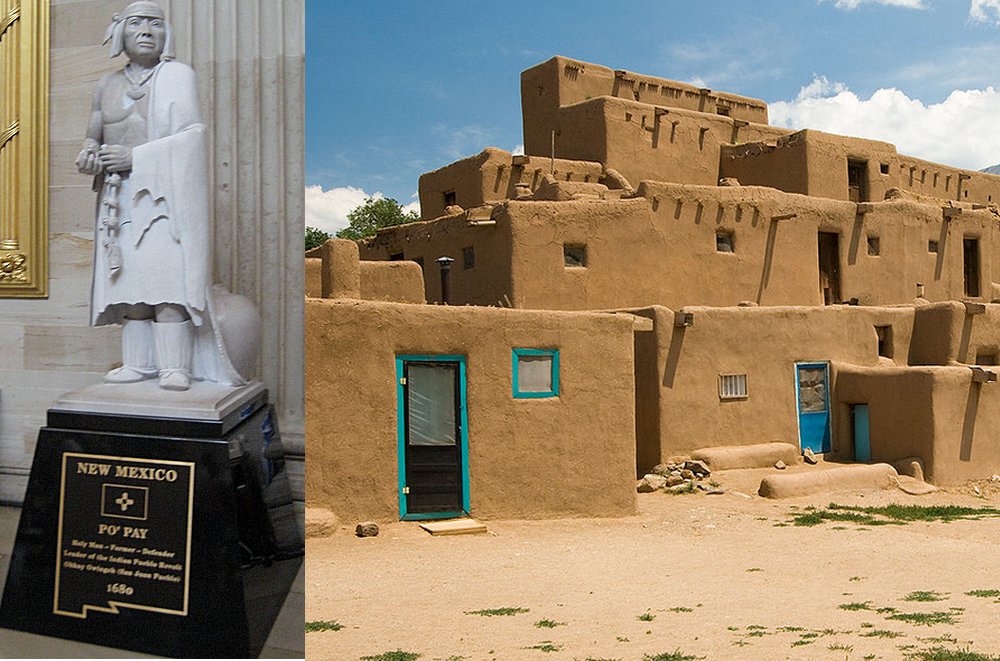 Left: Statue of Popé, or Po'Pay, now in the National Statuary Hall Collection in the US Capitol Building as one of New Mexico's two statues; Right: Taos Pueblo served as a base for Popé during the revolt. Image via wikipedia

Catholicism was forced on them by missionaries who burned their ceremonial pits (kivas), masks, and other sacred objects. Indians were tried in Spanish courts and received severe punishments-hanging, whipping, dismemberment (of hands or feet), or condemnation to slavery.

The most important cause of the Pueblo Revolt was probably the attempt of the Spanish to destroy their religion, banning traditional dances and religious icons. .

From 1645 on, there were several abortive revolts, after each of which medicine men were especially singled out for reprisals. One medicine man, Popé of the San Juan pueblo, embittered by imprisonment, believed himself commanded by the tribal ancestor spirits (kachinas) to restore the old customs; on Aug. 10, 1680, he led a full-scale revolt in which almost all the Pueblos participated.

On August 21, the Spaniards were forced to flee, leaving 400 dead, including 21 priests. The Indians celebrated their victory by washing off the stains of Christian baptism, annulling Christian marriages, and destroying churches.

They remained free until 1692, when New Mexico was reconquered by Gov. Pedro de Vargas.