AncientPages.com - Many secrets are hidden in Teotihuacan, northeast of Mexico City, Mexico.

Aztecs and the Toltecs, reached a place called Teotihuacan that was already enshrined in myth. In Nahuatl, the Aztec language still spoken in many parts of Mexico, Teotihuacan means "the place where men become gods." 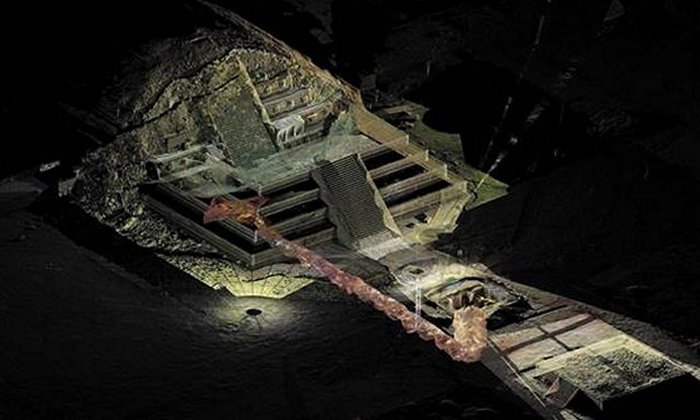 Kings reigned at Teotihuacan and were buried there, for to be buried in Teotihuacan was to join the gods in an afterlife.

One of Mexico's most-visited ancient sites, Teotihuacan is home to massive pyramids, temples and elite residences including many adorned with colorful murals. Teotihuacán has long stood as the greatest of Mesoamerican mysteries.

The city reached its peak between 100 B.C. and 650 B.C. with a population as large as 200,000, growing rich from a wide-ranging trade in obsidian that in pre-Columbian times was used to make knives and other weapons. 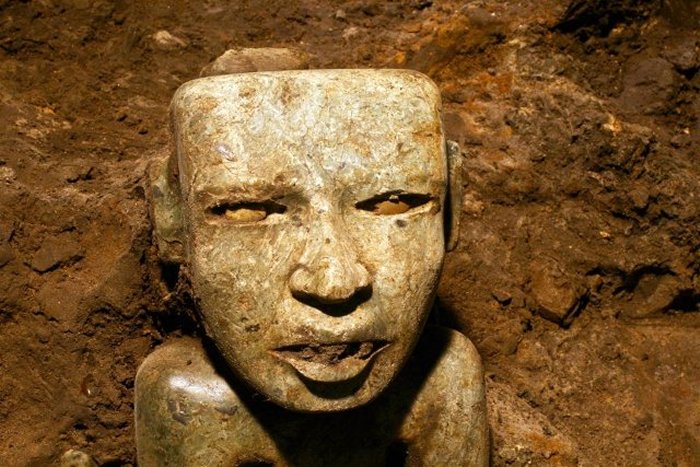 A sculpture unearthed at the Teotihuacan archeological site in Mexico. Mexican archaeologists have concluded a yearslong exploration of a tunnel sealed nearly 2,000 years ago at the ancient city of Teotihuacan and found thousands of relics. Teotihuacan dominated central Mexico centuries before the rise of the Aztecs in the 14th century. (AP Photo/Proyecto Tlalocan, INAH)

In designing Teotihuacan (pronounced tay-oh-tee-wah-KAHN), the city’s architects had arranged the major monuments on a north-south axis, with the so-called “Avenue of the Dead” linking the largest structure, the Temple of the Sun, with the Ciudadela, the southeasterly courtyard that housed the Temple of the Plumed Serpent.

According to Clemency Coggins, a professor emerita of archaeology and art history at Boston University, the ancient city was designed as a physical manifestation of its founders’ creation myth. Not only was Teotihuacán laid out in a measured rectangular grid, but the pattern was oriented to the movement of the sun, which was born there, Coggins pointed out. 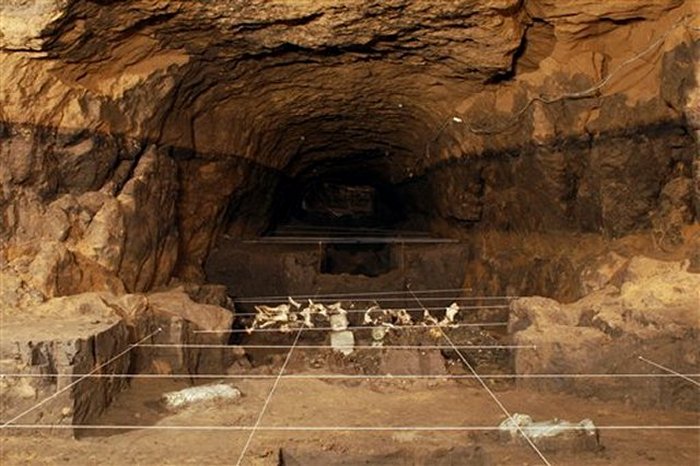 Sculptures and shells unearthed by investigators at the Teotihuacan archeological site in Mexico. Mexican archaeologists have concluded a yearslong exploration of a tunnel sealed nearly 2,000 years ago at the ancient city of Teotihuacan and found thousands of relics. Teotihuacan dominated central Mexico centuries before the rise of the Aztecs in the 14th century. (AP Photo/Proyecto Tlalocan, INAH)

Archaeologists have conducted long-term archaeological research in the City of the Gods and a chance discovery beneath a nearly 2,000-year-old pyramid may soon lead to the heart of a lost civilization.

The structure is filled with thousands of ritual objects and may lead to royal tombs, according to Sergio Gomez the lead Mexican archaeologist working with the project.

The entrance to the 1,800-year-old tunnel was first discovered in 2003, and its contents came to light thanks to excavations by remote-control robots and then human researchers. 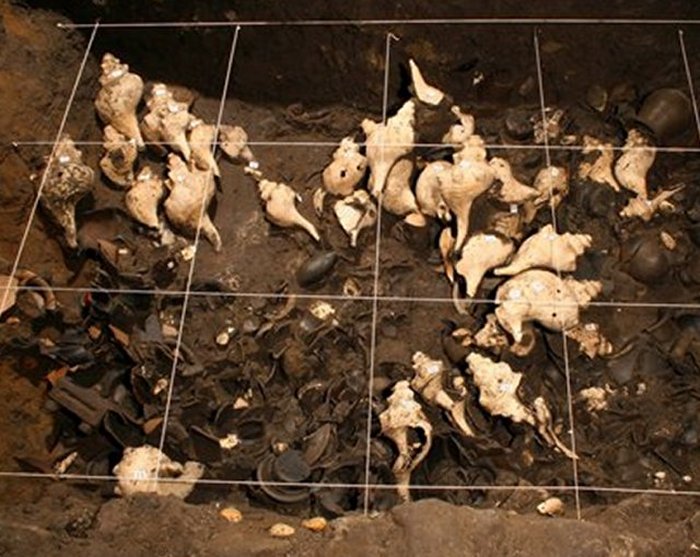 Shells unearthed at the Teotihuacan archeological site in Mexico.

The site is located approximately 30 miles (50 kilometers) northeast of Mexico City. The ruins have long been shrouded in mystery because its inhabitants did not leave behind written records.

The artifacts found inside the tunnel, located below the Temple of the Plumed Serpent, include finely carved stone sculptures, jewelry and shells. The tunnel ran approximately 330 feet from the Ciudadela to the center of the Temple of the Plumed Serpent. The hole that had appeared during the 2003 storms was not the actual entrance; that lay a few yards back, and it had apparently been intentionally sealed with large boulders nearly 2,000 years ago. 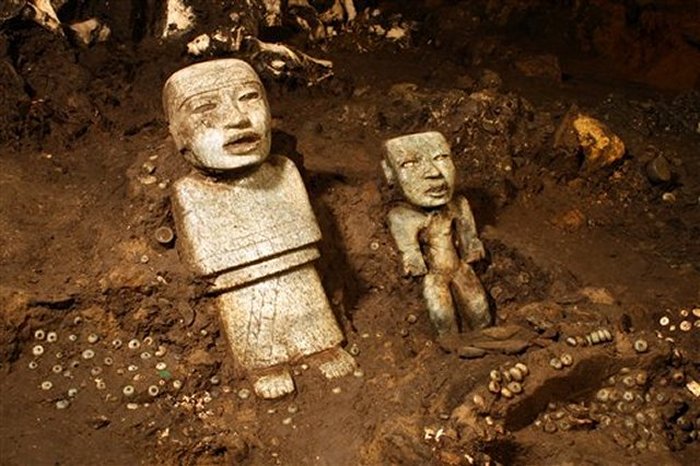 Sculptures unearthed by investigators at the Teotihuacan archeological site in Mexico. Mexican archaeologists have concluded a years long exploration of a tunnel sealed nearly 2,000 years ago at the ancient city of Teotihuacan and found thousands of relics. AP Photo/Proyecto Tlalocan, INAH

About 50,000 objects, of which 4,000 made of wood as well as scores of obsidian blades and arrow heads, provide clues into how the city's priests and rulers conceived the underworld.

Researchers hope to find a royal tomb at the end of the tunnel and as Gomez says, due to the magnitude of the offerings that have been found, it can't be in any other place. 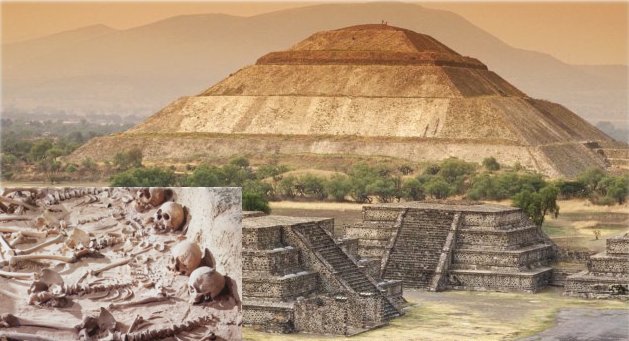 "We've been able to confirm all of the hypotheses we've made from the beginning," he added, saying ongoing excavations could yield more major discoveries.

Teotihuacan was settled as early as 400 B.C., but it was only around A.D. 100, an era of robust population growth and increased urbanization in Mesoamerica

The city had long been abandoned by the time the Aztecs came to power in the Valley of Mexico in the 14th century, yet it continued to play an important role as a destination for religious pilgrimages.