A.Sutherland  - AncientPages.com - These mysteries relics are a mystery because no one knows their origin.

Who did leave these relics on the ground of Mount Baigong (or Bayinnuowashan Mountain) located about 40 kilometers southwest of Delingha City? 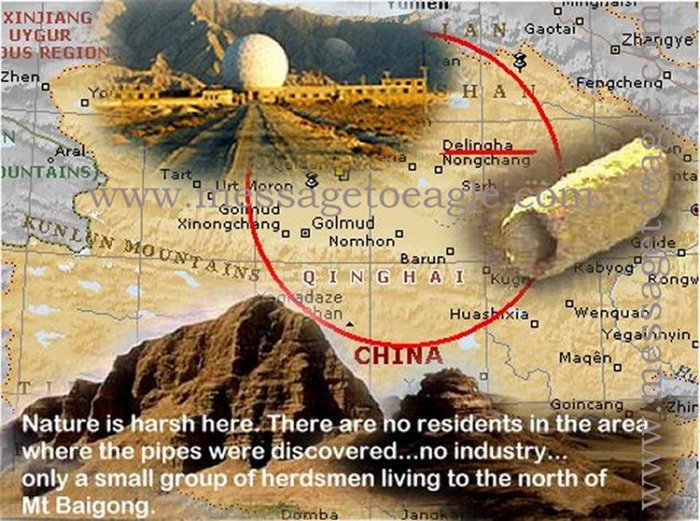 Isn't it strange that the result of the close examination of these artifacts has never been officially published?

The area around the city is very isolated but extremely interesting! Ancient pipes were discovered on and around Mt Baigong located not far from the city.

In 2003, a group of nine Chinese scientists traveled to Qinghai Province to closely examine the site. The result of the close examination of these artifacts has never been officially published?

Has any major research been done in the first place or has it been interrupted because the relics are in fact related to alien visitations to the planet Earth?

Those who visited Mount Baigong with the surrounding area say that the landscape is more like a Martian landscape than a surface of any place on Earth. The area is infertile, desolate, and located at more than 2,800 meters above sea level. Perhaps it was an ideal place to practice astronomy and radio astronomy.

The 13.7-m millimeter-wave radio telescope of Purple Mountain Observatory operates at 3200-m above the sea level near Delingha City. 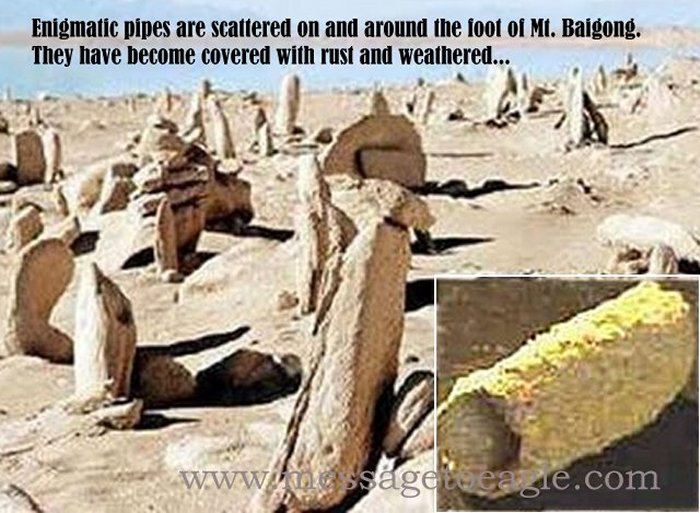 Were the enigmatic pipes a product of the ancients who were highly advanced or ´were they perhaps brought to Earth by sky gods themselves, considering that - as the preliminary analysis showed - eight percent of unknown chemical elements could not be identified.

The pipes were discovered in ancient caves in the vicinity of secret military facilities.

One of the pipes, or rather only half of it is about 40 centimeters in diameter tilting from the top to the inner end of the cave. Another pipe is sticking out of the ground.

According to Qin Jianwen, head of the publicity department of the Delingha government, the artifacts were once analyzed at a local smeltery. The obtained results indicate that they are made up of 30 percent ferric oxide with a large amount of silicon dioxide and calcium oxide. Eight percent of unknown chemical elements that could not be identified.

Liu Shaolin, an engineer who did the analysis said that "the large content of silicon dioxide and calcium oxide is a result of long interaction between iron and sandstone, which means the pipes must be very old."
Who brought the pipes to Mount Baigong and when?

Many ancient legends relate that monsters once lived in central Asia thousands of years ago. Those monsters could fly. The shamans who enter into trance, are believed to come in contact with "lords of creation, who have the faces of tigers and are borne through the air by birds of fire".

Were the enigmatic pipes a product of the ancients who were highly advanced or ´were they perhaps brought to Earth by sky gods themselves, considering that - as the preliminary analysis showed - eight percent of unknown chemical elements could not be identified.

According to one of many theories, the site might have been a launch tower left by ETs and one of the Chinese agencies stated that the government of China has expressed an opinion that the site was an alien landing pad. Some believe that the enigmatic pipes are naturally occurring formations created by Mother Nature.

A.Sutherland  - AncientPages. All rights reserved. This material may not be published, broadcast, rewritten or redistributed in whole or part without the express written permission of AncientPages.com.