AncientPages.com - Fragment of an ancient Egyptian king's unique sphinx was unearthed at a dig in northern Israel, and researchers struggling to understand just how the unexpected find ended up there. 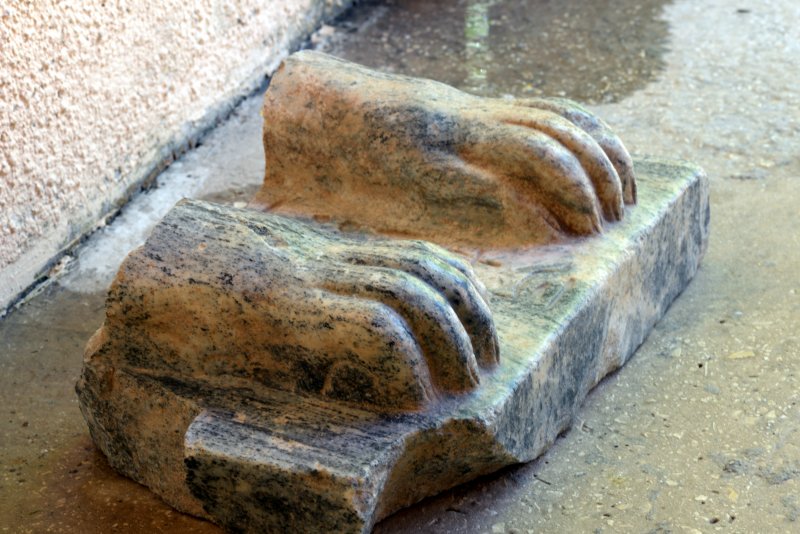 Base of a Sphinx statue found by Hebrew University of Jerusalem archaeologists at the excavations at Tel Hazor, Israel, north of the Sea of Galilee. A hieroglyphic inscription ties the Sphinx to an Egyptian king who was one of the builders of the Giza pyramids, approximately 2500 BCE. The statue is unique in that it is the only one anywhere bearing the pharaoh's name. Credit: Prof. Amnon Ben-Tor and Dr. Sharon Zuckerman

The broken granite sphinx statue—including the paws and some of the mythical creature's forearms—displayed at Tel Hazor archaeological site in Israel's Galilee, is the first such find in the region.

Its discovery also marks the first time ever that researchers have found a statue dedicated to Egyptian ruler Menkaurse (Mycerinus) who ruled circa 2,500 BC and was a builder of one of the three Giza pyramids, an expert said.

"This is the only monumental Egyptian statue ever found in the Levant - today's Israel, Lebanon, Syria," Amnon Ben-Tor, an archaeology professor at the Hebrew University in charge of the Tel Hazor dig, told AFP.

Ben-Tor said that besides Mycerinus's name, carved in hieroglyphics between the forearms, there are symbols reading "beloved by the divine souls of Heliopolis".

"This is the temple in which the sphinx was originally placed," Ben-Tor said of Heliopolis, an ancient city that lies north of today's Cairo.

Tel Hazor, which Ben-Tor calls "the most important archaeological site in this country," was the capital of southern Canaan, founded circa 2,700 BC and at its peak covering approximately 200 acres and home to some 20,000 Canaanites. It was destroyed in the 13th century BC. 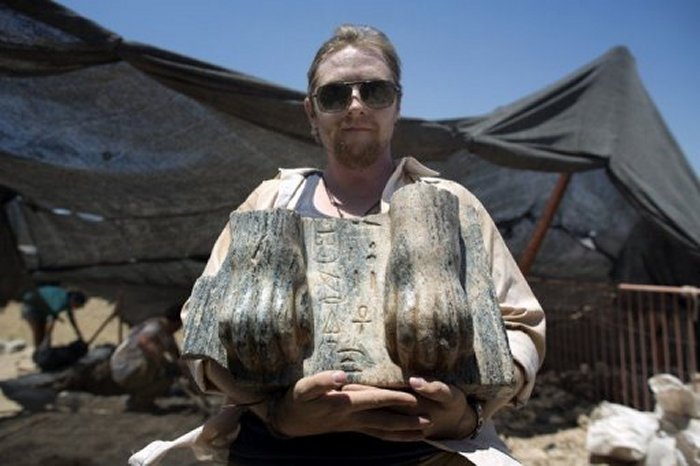 An Australian excavation volunteer on July 9, 2013, displays part of an ancient Egyptian king's unique sphinx with a hieroglyphic inscription dating circa 3rd century BCE, found during excavation at the northern Israeli site of ancient Tel Hazor. The sphinx was unveiled with researchers struggling to understand just how the unexpected find ended up there.

"Following a gap of some 150 years, it was resettled in the 11th century BC by the Israelites, who continuously occupied it until 732 BC," when it was destroyed by the Asyrians, Ben-Tor said.

How, when and why it reached Tel Hazor remains a mystery.

"That it arrived in the days of Mycerinus himself is unlikely, since there were absolutely no relations between Egypt and this part of the world then," said Ben-Tor, adding that  Egypt maintained relations with Lebanon, especially via the ancient port of Byblos, to import cedar wood via the Mediterranean, so they skipped" today's northern Israel, he said.

Another option is that the statue was part of the plunders of the Canaanites, who in the late 17th and early 16th century BC ruled lower Egypt. Egyptian records tell us that those foreign rulers... plundered and desecrated the local temples and did all kinds of terrible things, and it is possible that some of this looting included a statue like this one," Ben-Tor said.

But to Ben-Tor the most likely way the sphinx reached Tel Hazor is in the form of a gift sent by a later Egyptian ruler.

"The third option is that it arrived in Hazor some time after the New Kingdom started in 1,550 BC, during which Egypt ruled Canaan, and maintained close relations with the local rulers, who were left on their thrones," he said.

"In such a case it's possible the statue was sent by the Egyptian ruler to king of Hazor, the most important ruler in this region."

Shlomit Blecher, who manages the Selz Foundation Hazor Excavations in Memory of Yigael Yadin, was the archaeologist who actually unearthed the finding in August 2012.

The statue's incrustation was meticulously removed over a period of many months by the excavation's restorer, before the intricate carvings and hieroglyphics were fully visible.

"It was the last hour of the last day of the dig," she told AFP of the moment of the find. "We all leapt with joy and happiness, everyone was thrilled."

"We hope the other pieces are here and that we find them in the near days," she said.

Ben-Dor said the statue was most likely deliberately broken by new occupiers at Tel Hazor in an act of defiance to the old rule.

Finding the sphinx was "unexpected," said Ben-Tor, "but fits" archaeological facts and findings. "When you're in a bank, you find money," he said.

To Ben-Tor, however, the true coveted find would be archives buried somewhere on Tel Hazor that could serve as an inventory to the ancient city's content.

"I know there are two archives," he said. "We already have 18 documents from two periods, the 17th and 14th century BC. If I found those archives, people would come running here."