Conny Waters - AncientPages.com - The CENIEH participates in a study in which dental remains of Homo antecessor were analyzed using Micro-Computed Tomography: the results indicate that this thin enamel trait was already present in the genus Homo in the European Early Pleistocene around 900,000 years ago 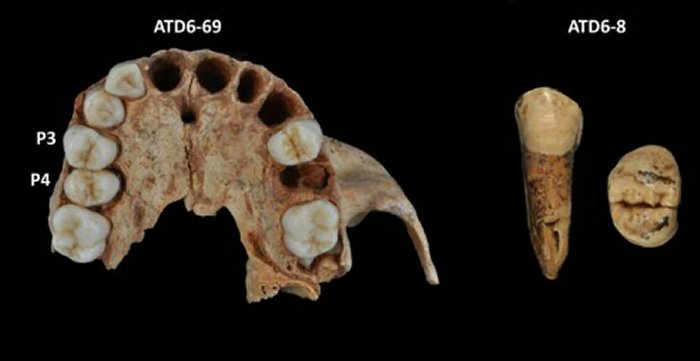 Three of the seven premolars belonging to Homo antecessor analyzed in this study/Laura Martín-Francés.

The Dental Anthropology Group of the Centro Nacional de Investigación sobre la Evolución Humana (CENIEH) has participated in a paper published in the American Journal of Biological Anthropology on the dental remains of Homo antecessor, the species recovered from level TD6 of the Gran Dolina site (Atapuerca, Burgos), which reveals new aspects of the biology of this species.

The results of this study, led by the researcher Laura Martín-Francés (UCM-ISCIII and CENIEH), suggest that, although the Neanderthals continue to be the only species whose dentition is characterized by the possession of thin enamel, this trait was already present in the genus Homo in the European Early Pleistocene, around 900,000 years ago.

Until recently, it was thought that the Neanderthals were the sole representatives of the genus Homo to possess thin enamel. Nevertheless, new analyses, which were mainly conducted on the dental remains from the TD6 level at Gran Dolina, have shown that the thin enamel pattern appeared earlier than the Neanderthals.

Due to its phylogenetic position and its relationship to both Neanderthals and modern humans, the H. antecessor collection represents a unique opportunity to find out when this thin enamel trait appeared in our genus”, says Martín-Frances, in a press release.

In this study, the enamel thickness pattern and its distribution (which zones present a thinner or thicker layer) in the crown were characterized in seven premolars belonging to two H. antecessor individuals (TD6-H1 and TD6-H3), and this was compared with other species in the fossil record and modern humans from several sites in Europe, China and Africa.

By using micro-computed tomography (mCT) and high-resolution images from the CENIEH's Microscopy and Micro-Computed Tomography Laboratory, the authors verified the presence of different patterns in the two individuals studied. While the individual TD6-H1 has thin enamel, with a clear affinity to the Neanderthal characteristic, TD6-H3 shows a thick-enamel pattern similar to the majority of fossil species and modern humans.

“Among the possible causes that could justify the presence of distinct enamel patterns in these individuals from the same species, we believe that the most plausible is variability within the same population”, adds Martín-Francés.