Jan Bartek - AncientPages.com -  A rare and well-preserved bone flute has been unearthed in Kent, UK. Scientists discovered the flute dating back to the 13th-15th Century while excavating at an archaeological site near Herne Bay.

The Medieval musical instrument was made from the tibia shaft of either a sheep or a goat. 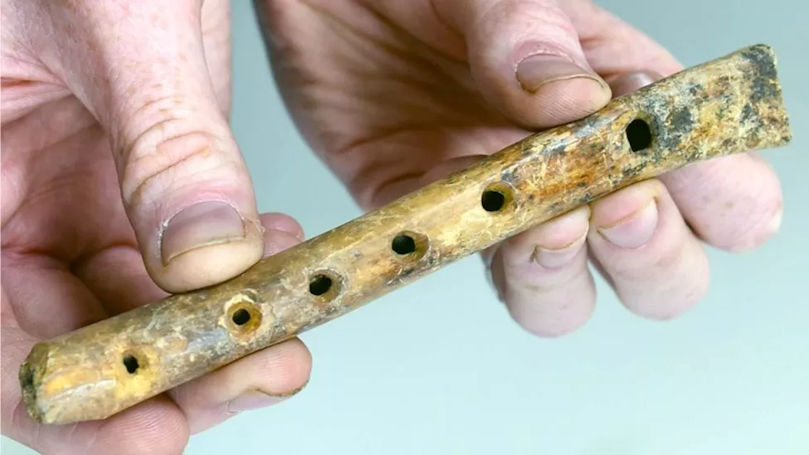 The Cotswold Archaeology team informs, "our Andover fieldwork team have just excavated a site at Herne Bay, on the north Kent coast.

Trenching, undertaken last year, had uncovered features dating to the Late Bronze Age and Roman periods in the west, and ditches of medieval date in the east, with a suggestion of some early medieval activity too. This correlated well with many previous investigations in the vicinity, which have found multi-period remains, mostly representing late prehistoric (Bronze Age/Iron Age) settlement.  Pleistocene deposits with Palaeolithic potential were also known, so our works included test pits to specifically test this.

The geology was variable, and the team showed their expertise and resilience with this, and with the challenging baked ground and overwhelming summer heat! The excavated areas lie on a gentle, south/south-east facing slope; the underlying bedrock is mapped as London Clay Formation, overlain by ‘superficial Head deposits’ (gravel, sand, silt, and clay). The test pitting in Area 2 found in-situ river gravel deposits, and laminated coarse sands and silts at the depth of an ancient channel associated with the river Stour. While no definite Palaeolithic flint artefacts were found in these test pits, there is potential for this in other parts of the development site, and optical luminescence (OSL) dating may be recommended to date these deposits.

Our excavation in Area 1 revealed ditches and pits, with spot dating of pottery suggesting activity dating from the Middle–Late Bronze Age through to the Roman period, probably indicating a managed agricultural landscape with nearby settlement. Some of the features uncovered in Area 2 were also of late prehistoric date, including the postholes of a possible rectangular structure. Anglo-Saxon/early medieval occupation is also evident, as represented by some pits and postholes (none of which form a discernible structure). Two ditches which formed two sides of a large rectilinear enclosure are presently undated.

Area 2a contained the southwest corner of a medieval enclosure, which extended north into Area 3. This lay to the west of a currently existing farm track, which may also have much earlier, perhaps medieval, origins. Small rectangular enclosures sometimes containing the remains of sunken-featured buildings (often associated with specific activities including bread baking and brewing), alongside trackways, are a common feature of the later medieval landscape in north Kent; one such possible structure was revealed during our dig.

A rare artefact, a worked bone flute which is remarkably well preserved, from one of the medieval pits within the ditched enclosure, was found in association with medieval pottery of 12th to 15th century date. 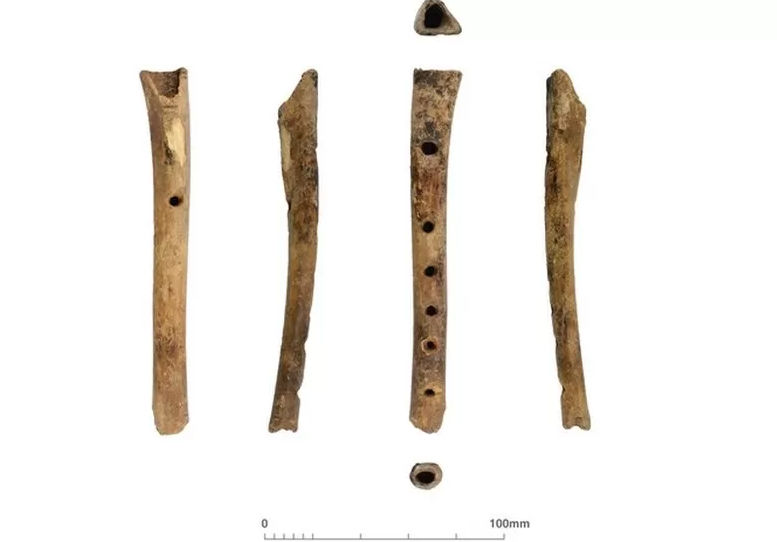 This musical instrument was skilfully created from a sheep/goat tibia shaft that was carved with five finger holes along its top and a thumb hole underneath. Research on this lovely object is ongoing, but it is believed to be a ‘fipple flute’ (a class of instrument that includes the modern-day recorder). It may be missing some form of mouthpiece, but it is otherwise complete.

It is very similar to an example from Keynsham Abbey, Somerset, found in 1964, which was associated with a mid-14th century coin. Bone flutes and pipes are generally rarely found but are among the more common types of musical instruments that are known from archaeology. Further examples are found across Europe, including in England, from: Winchester, Hampshire; Flaxengate, Lincoln; Coppergate, York; and a pair of reed pipes from Ipswich, Suffolk."