Conny Waters - AncientPages.com - Archaeologists have begun a new project to reveal the secrets of one of Britain’s most powerful Anglo-Saxon queens and the monastery which she presided over, in a new three-year dig in Cookham, Berkshire.

The projected started on August 1, and will continue as a University of Reading archaeology field school, helping to train the next generation of archaeologists, including archaeology students and local volunteers. 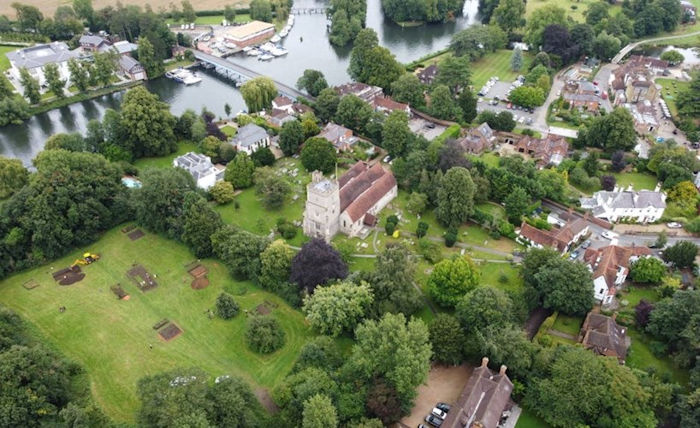 Aerial view showing the excavations in the grounds of Holy Trinity, Cookham. Credit: University of Reading

The new excavation is on the site of a monastery led by the powerful Queen Cynethryth, who ruled the kingdom of Mercia with her husband King Offa in the late 8th century.

A network of over twenty monasteries was established along the route of the Thames from its source to its mouth in the Anglo-Saxon period, but barely any of the sites on this ‘monastic superhighway’ been subject to archaeologicalAnglos-Anglos-SaxonSaxon investigation.  The Field School at Cookham will provide the first tangible glimpses of the appearance and daily activities of a Thames monastery.

The site of the abbey was rediscovered by Reading archaeologists in the summer of 2021 in an exploratory excavation, but now the team are going back for a full exploration of the site over three years.

The site next to the churchyard in the village of Cookham, near Maidenhead, will be subject to large scale annual excavations involving Reading students, who will benefit from first-hand experience of a nationally-significant dig.

Cynethryth was far more influential than other queens of the Anglo-Saxon period, and the first to have a coin minted with her image. It is hoped that the new excavations could uncover direct evidence of Cynethryth’s influence – such as coins bearing her image – or even the remains of Cynethryth herself, believed to be buried within the monastery grounds.

Dr Gabor Thomas, the University of Reading archaeologist who led the 2021 excavation and director of the Cookham field school, said: “This once-powerful monastery has lay hidden for centuries, which makes it an excellent prospect for discoveries that would provide clues about Anglo-Saxon life in a relatively unexplored region of England.

“This will be a valuable opportunity to open a window into a crucial period of English history, as well as giving the archaeologists of tomorrow a chance to practise their skills, and potentially play a leading role in one of Britain’s most exciting current archaeological digs.”

Cynethryth ruled over the monastery as a royal abbess following the death of Offa in 796 AD. There is evidence she was given equal status to the King in correspondence from other European rulers, implying a powerful status in political life, rare for women during that period of history.

Excavations at the site on the bank of the Thames will be on a much larger scale than the previous exploratory dig of 2021, with the objective of revealing detailed evidence for the layout of the monastery and the daily life of its inhabitants. 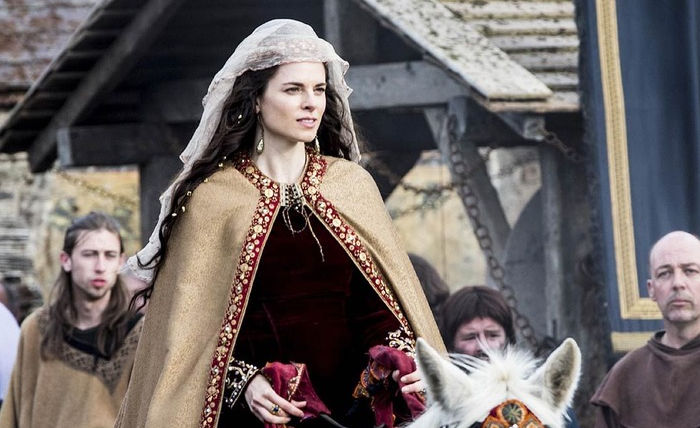 Amy Bailey as Kwenthryth in the TV series Vikings. Credit: The HISTORY Channel

The team hope to unearth more of the layout of the monastic buildings, items that offer clues about daily life for the people who lived there, including their work, their daily lives, and what they wore and their religious activities.

The work will crucially provide evidence of what Early Medieval monasteries in the Thames Valley region looked like – something that is currently unknown. Students will attempt to learn to what extent the river played in providing resources, if the inhabitants were trading with other kingdoms, and the site’s wealth and royal status.

The Cookham field school will run for four weeks in August 2022, returning in 2023 and 2024, and with the possibility of further excavations in the future.

Cookham becomes the University’s second field school site, alongside Dunyvaig Castle on the Isle of Islay in Scotland. It follows previous field schools at the Roman settlement near Silchester in Hampshire, where successive field school excavations investigated its bath house, the influence of Emperor Nero on the town, and its evolution from an Iron Age site.

The return to Cookham follows the nearby discovery of an Anglo-Saxon warrior dubbed the ‘Marlow Warlord’ in 2020. Both the Warlord and Cookham excavations are part of the Middle Thames Archaeology Partnership, a research collaboration between the University of Reading and governmental, commercial and third sector organisations. It seeks to enhance, protect and harness the heritage of this part of the Thames valley, for which there is currently relatively little archaeological evidence.