Jan Bartek - AncientPages.com - The sword was found in three pieces by two metal detector enthusiasts, independent of each other, in the Jåttå/Gausel area in Stavanger, already renowned for the grave of the so-called Gausel queen. Found in 1883, it is considered one of the wealthiest women's graves of the Viking Age.

Like the women buried in the Oseberg ship, the Gausel queen had rich artifacts from the British Isles in her grave. 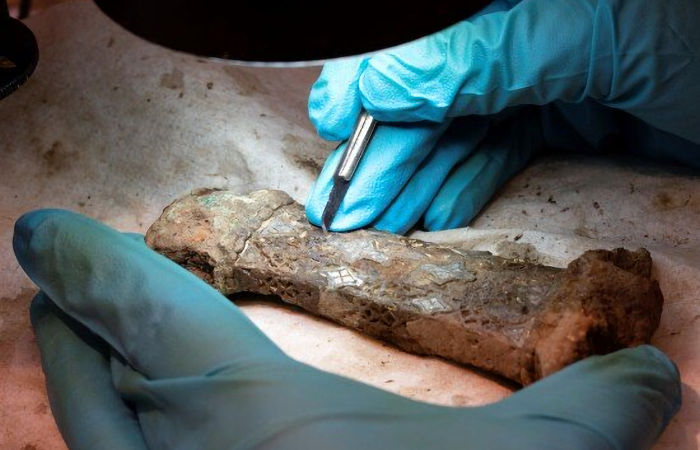 The sword would have been one of the most spectacularly ornamented and heaviest types of swords from the Viking Age. The blade is missing, but the hilt has unique details in gold and silver and exquisite details not previously known.

Only about 20 such swords have been found in Norway—out of a total of around 3,000 Viking sword finds.

The sword is currently under conservation at the Museum of Archaeology at the University of Stavanger. It is still difficult to see the details in the hilt, but the décor includes gilded elements of the typical animal styles found during the Iron and Viking Age, between ca. 550 and 1050. 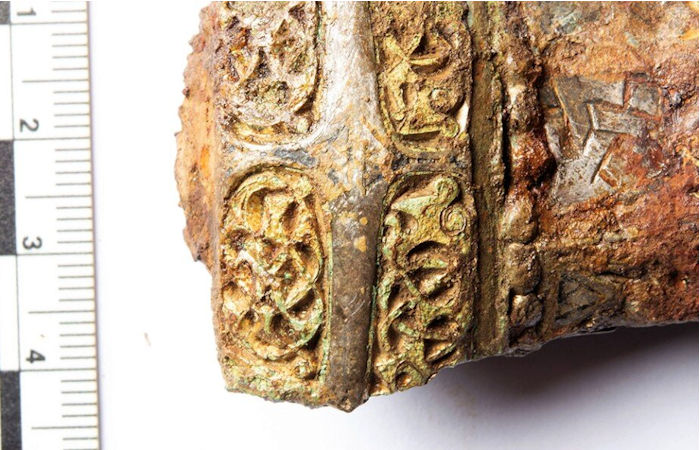 The hilt has unique details in gold and silver and exquisite details not previously known. Credit: Conservator Cora Oschmann/Museum of Archaeology/ University of Stavanger

"It is very exciting to work on a find like this. It is challenging work, but we uncover new details daily," conservator Cora Oschmann, in charge of the conservation, says.

The hilt also contains geometrical figures in silver, made with the so-called niello technique. This means that a metallic mixture of sorts was used to make black stripes in the silver.

Both ends of the crossguard are formed as animal heads.

"The technique is of a very high quality, and both the lavish and complicated decor and the special formation of the crossguard make this a truly unique find," archaeologist Zanette Glørstad from the museum says.

This particular type of sword has been found in both Eastern and Western Europe. The few swords of this type found in Norway were most likely imported.

"But it is possible to imagine that copies of these types of swords were made by very competent sword smiths in Norway," Zanette Glørstad points out.

In 1883 a farmer by chance found several gilded bronze mounts in a mound on the hillside, of his farm at Gausel, Rogaland, Norway. (Stavanger municipality) It turned out to be one of the richest women's burials from the Viking period in Norway. Among the objects were oval brooches of gilt bronze and sliver, the third brooch of massive silver, two silver bracelets, and some of the finest gilted bridle mounts we have. Remains of a horse's cranium are evidence that the bridle was mounted on a horse's head in the grave. The bridle mounts, together with a reliquary mount and a bronze bowl were of Irish origin. There were also three drinking horns with bronze mounts in the burial. The remains and exact location of the grave were rediscovered in 1997. This is a reconstruction of this grave, popularly known as the "Gausel Queen".

"The décor suggests that the sword was made in France or England, and that it can be dated to the early 800s, like the sword found on the island Eigg," Glørstad says.

Norway and the British Isles

It has previously been speculated whether the Jåttå/Gausel-area was the starting point for extensive alliances and looting. "The location of the find, close to the Gausel queen, means that we have to take a new look at the entire Jåttå/Gausel area," says Håkon Reiersen, researcher at the Museum of Archaeology in Stavanger.

"The outstanding collection of imported spectacular finds connected to both men and women in this area shows that this has been an important hub for the contact across the North Sea," he says. 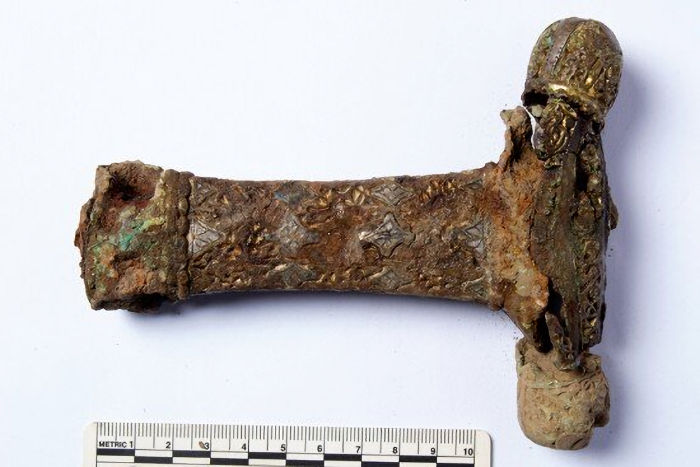 The metal detector enthusiasts immediately turned in their finds to the Cultural heritage management as Norwegian law demands. This ensured that the Museum of Archaeology at the University of Stavanger immediately could take care of the parts and start the conservation work.

The sword will be exhibited at the Museum of Archaeology at the University of Stavanger when the conservation work is finished.