Jan Bartek  - AncientPages.com - Archaeologists from the University of Gothenburg have concluded an excavation of two tombs in the Bronze Age city of Hala Sultan Tekke in Cyprus. The finds include over 150 human skeletons and close to 500 objects—including gold jewelry, gemstones and ceramics—from around 1350 BCE.

Since 2010, the New Swedish Cyprus Expedition (The Söderberg Expedition) has had several rounds of excavations in Cyprus. In 2018, archaeologists discovered two tombs in the form of underground chambers, with a large number of human skeletons. Managing the finds required very delicate work over four years, since the bones were extremely fragile after more than 3,000 years in the salty soil. 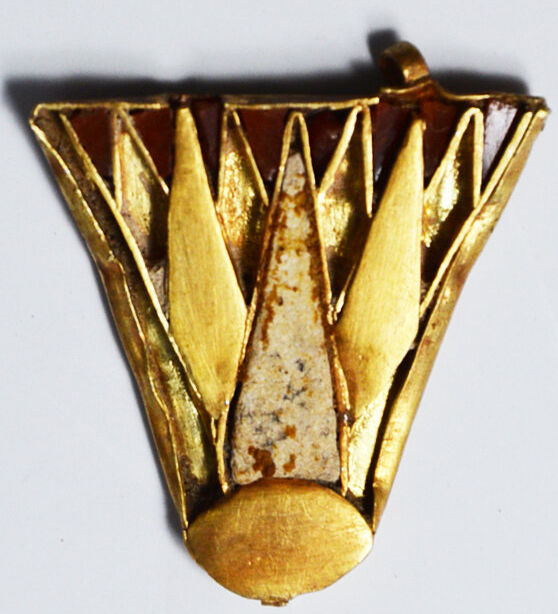 Egyptian lotus jewelry with inlaid stones (ca. 1350 BCE).“Comparisons with other finds from Egypt show that most of the objects are from the time of Nefertiti and her husband Echnaton around 1350 BCE. Nefertiti wore similar jewelry. Credit: Peter Fischer, Teresa Bürge

In addition to the skeletons of 155 individuals, the team also found 500 objects. The skeletons and ritual funeral objects were in layers on top of each other, showing that the tombs were used for several generations.

"The finds indicate that these are family tombs for the ruling elite in the city. For example, we found the skeleton of a five-year-old with a gold necklace, gold earrings and a gold tiara. This was probably a child of a powerful and wealthy family," says Professor Peter Fischer, the leader of the excavations.

The finds include jewelry and other objects made of gold, silver, bronze, ivory and gemstones and richly decorated vessels from many cultures.

"We also found a ceramic bull. The body of this hollow bull has two openings: one on the back to fill it with a liquid, likely wine, and one at the nose to drink from. Apparently, they had feasts in the chamber to honor their dead."

A message thousands of years old

One particularly important find is a cylinder-shaped seal made from the mineral hematite, with a cuneiform inscription from Mesopotamia (present day Iraq), which the archaeologists were able to decipher.

"The text consists of three lines and mentions three names. One is Amurru, a god worshiped in Mesopotamia. The other two are historical kings, father and son, who we recently succeeded in tracking down in other texts on clay tablets from the same period, i.e., the 18th century BC. We are currently trying to determine why the seal ended up in Cyprus more than 1000 kilometers from where it was made." 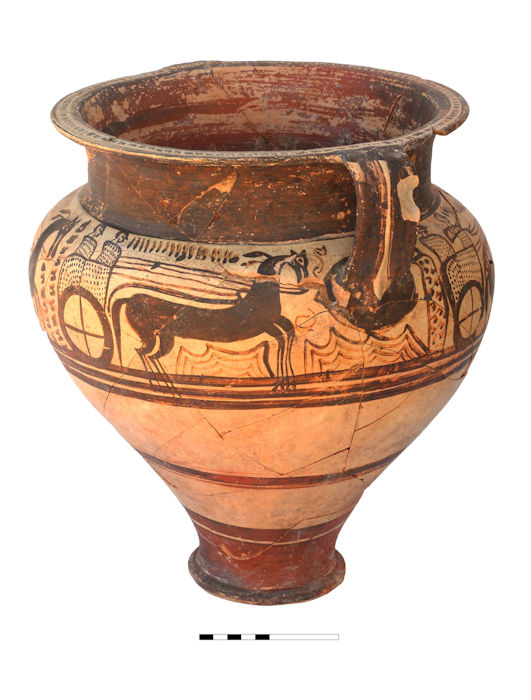 Among the finds are the red gemstone carnelian from India, the blue gemstone lapis lazuli from Afghanistan and amber from around the Baltic Sea, which shows that the city had a central role for trade during the Bronze Age. The gold jewelry, along with scarabs (beetle-shaped amulets with hieroglyphs) and the remains of fish imported from the Nile Valley, tell the story of intensive trade with Egypt.

In the tombs, the archaeologists found figurines of goddesses with bird faces. This is likely a goddess with a bird's head holding a child that is half bird and half human. Credit: Peter Fischer, Teresa Bürge

By comparing with similar finds from Egypt, the archaeologists were also able to date the jewelry. 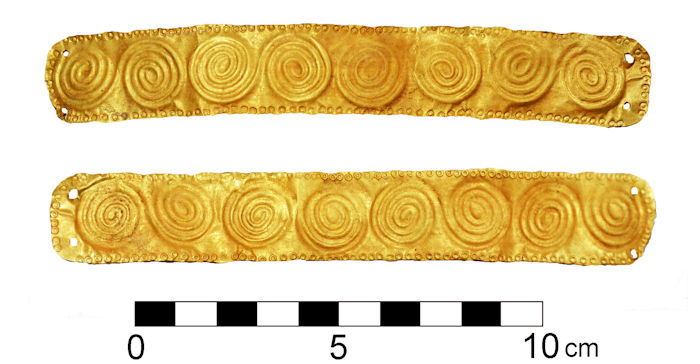 One of the skeletons belonged to a five-year-old buried with lots of gold jewelry, including this tiara. Credit: Peter Fischer, Teresa Bürge 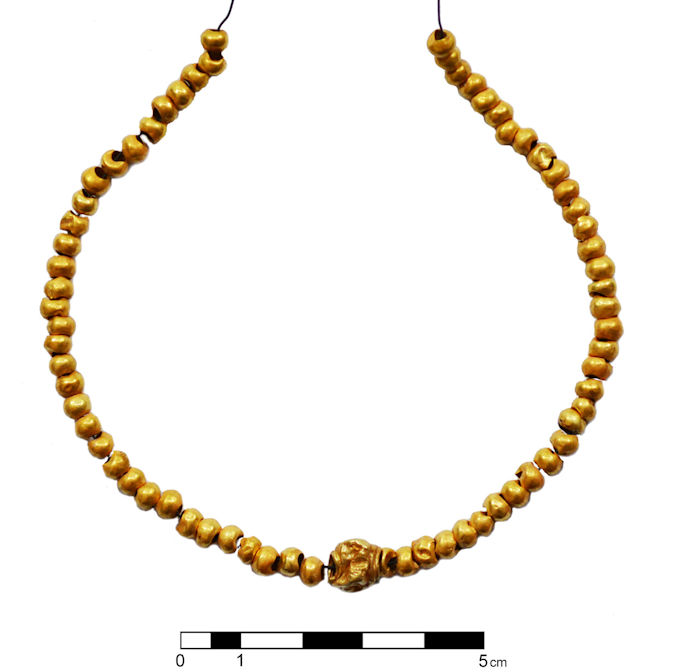 "The comparisons show that most of the objects are from the time of Nefertiti and her husband Echnaton around 1350 BCE. Like a gold pendant we found: a lotus flower with inlaid gemstones. Nefertiti wore similar jewelry."

The ceramic finds are also important.

"The way that the ceramics changed in appearance and material over time allows us to date them and study the connections these people had with the surrounding world. What fascinates me most is the wide-ranging network of contacts they had 3,400 years ago."

The next step will be DNA analysis of the skeletons.

"This will reveal how the different individuals are related with each other and if there are immigrants from other cultures, which isn't unlikely considering the vast trade networks," says Peter Fischer.