Conny Waters - AncientPages.com - The Early Bronze Age village of Afragola on the Campania Plain of Southern Italy was buried under nearly a meter of volcanic ash deposited by the Avellino eruption of Vesuvius ca. 4,000 years ago.

The remarkable preservation of the site is unmatched in Europe. 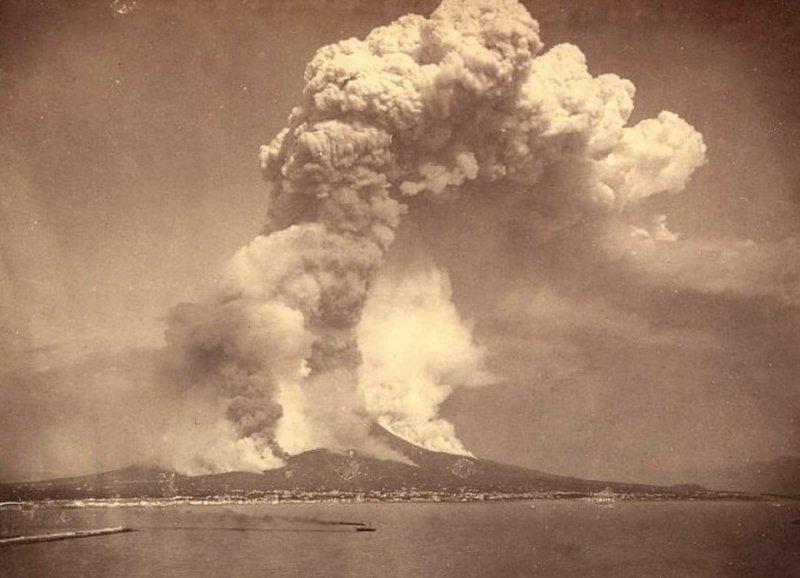 Image - Mt. Vesuvius erupts in 1880. Researchers are detailing a cataclysmic eruption of Vesuvius from thousands of years before the famous eruption that buried Pompeii. The villagers had time to flee, which is why the site does not contain human remains as other sites like Pompeii do.

Volcanic eruptions evoke images of lava, fire, and destruction; however, this is not always the case. The Plinian eruption of Mount Vesuvius around 4,000 years ago—2,000 years before the one that buried the Roman city of Pompeii— left a remarkably intact glimpse into Early Bronze Age village life in the Campania region of Southern Italy.

The village of Afragola was situated near present-day Naples, about 10 miles from Mount Vesuvius. Following the eruption, the village was encased in meters of ash, mud, and alluvial sediments, which lent a surprising degree of protection to the site, a rarity for archaeological sites from this era in Europe. Owing to the level of preservation and the diversity of preserved plants at the site, researchers were interested to see if they could pinpoint the time of year when the eruption occurred.

The village of Afragola was excavated over an area of 5,000 square meters, making it among the most extensively investigated sites of the Early Bronze Age in Italy, with a large group of archaeologists who meticulously carried out the sampling.

UConn Department of Anthropology researcher Tiziana Matarazzo '14 (Ph.D.) and coauthors and archaeologists Monica Stanzione, Giuliana Boenzi, and Elena Laforgia from the Soprintendenza of Archeology, Fine Arts and Landscape for the Metropolitan Area of Naples and Polo Museale Campania to tell the story of Afragola and have published their most recent findings in the Journal of Archaeological Science: Reports.

"The site is exceptional, because Afragola was buried by a gigantic eruption of Vesuvius, and it tells us a lot about the people who lived there, and the local habitat. In this case, by finding fruits and agricultural materials, we were able to identify the season of the eruption, which is usually impossible," says Matarazzo.

Matarazzo explains that the course of the eruption happened in different phases, starting with a dramatic explosion that sent debris traveling primarily to the northeast. This gave the villagers time to flee, which is why the site does not contain human remains as other sites like Pompeii do, but it does contain several footprints of adults and children fleeing the area.

Then the direction of the wind changed, bringing a copious amount of ash toward Afragola.

"The last phase brought mostly ash and water—called the phreatomagmatic phase—mainly dispersed to the west and northwest up to a distance of about 25 km from the volcano," Matarazzo explains. "This last phase is also what completely buried the village. The thick layer of volcanic material replaced the molecules of the vegetal macro-remains and produced perfect casts in a material called cinerite," and these conditions meant the materials were resistant to degradation, even after several millennia.

"Leaves that were in the woods nearby were also covered by mud and ash which was not super-hot, so we have beautiful imprints of the leaves in the cinerite," she says.

The village offers a rare glimpse at how people lived in Italy in the Early Bronze Age, the researchers say.

"In Campania at this time, we have huts, but in Greece, they had palaces," Matarazzo says. "These people probably lived in groups with maybe one or more persons was the head of the group."

There was also one storage building in the village where all the grains and various agricultural goods and fruits were gathered from nearby woods to be stored and likely shared with the whole community.

Fortunately for this study, unlike the other huts in the village, the plant food warehouse caught fire probably due to the arrival of pyroclastic materials. Its collapse made indirect carbonization of the stored vegetal materials possible.

Matarazzo says the Bronze Age Campanian Plain was home to a rich diversity of food sources, including a variety of grains and barley, hazelnuts, acorns, wild apples, dogwood, pomegranates, and cornelian cherry, all extraordinarily well-preserved in the aftermath of the volcanic eruption.

The evidence points toward the eruption happening in the fall, as the villagers amassed their food stores from the nearby woods. Matarazzo explains that imprints of leaves found at the base of the trees along with ripe fruits are very indicative of the seasonality.

Between climate change and development, Matarazzo explains the area looks vastly different from the way it once was. "The reason we found the site is because of the construction of a high-speed train line. "

For now, the researchers can reference the materials recovered from the site which are now housed off-site in a storage facility. The focus of future research includes a closer examination of animal bones found on site, including cattle, goats, pigs, and fish, as well as footprints, says Matarazzo.

"This eruption was so extraordinary that it changed the climate for many years afterward. The column of the Plinian eruption rose to basically the flight altitude of airplanes. It was unbelievable. The cover of ash was so deep that it left the site untouched for 4,000 years—no one even knew it was there. Now we get to learn about the people who lived there and tell their stories."