A. Sutherland  - AncientPages.com - Did the Library of Alexandria, the greatest collection of knowledge and literature disappear out of sight but survived by being saved?

Ancient records say that seven hundred thousand of the most precious books written on wax, papyrus, parchment, and tablets of stone, wood, and clay were gathered from all parts of the ancient world and housed in Alexandria, in buildings specially prepared for the purpose.

It is commonly believed that around 295 BC the scholar and library keeper to the king, Demetrius of Phalerum, convinced Ptolemy I Soter (ruler of Egypt (323 BC-283 BC) to establish a library that would store a copy of every book in the world! 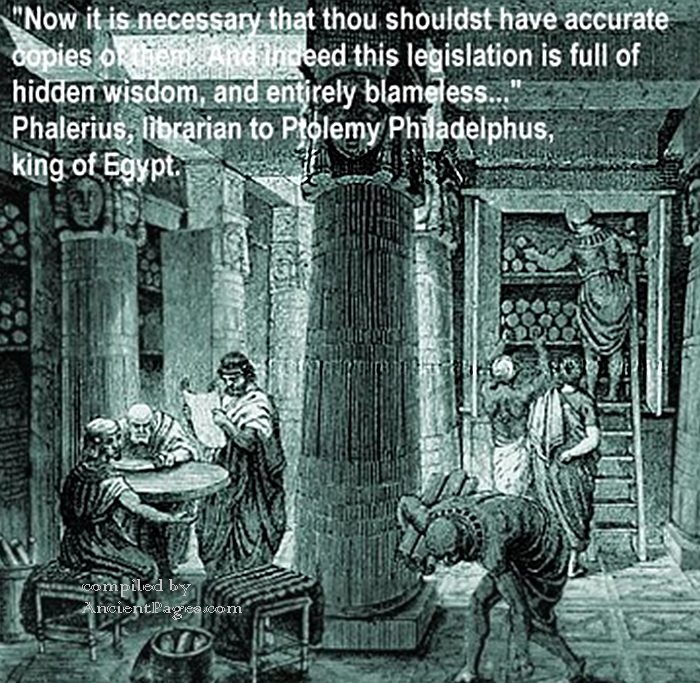 His idea was to collect the most valuable pieces of literature, "...all the books that were in the habitable earth, and buying whatsoever was anywhere valuable..."(Josephus, "Antiquities")
And the king Ptolemy agreed to gather unique manuscripts of philosopher-thinkers and writers. The legacy of the greatest masterminds of antiquity that also included the wisdom of all the ancient religions of the world, expanded systematically until something unimaginable happened.

The magnificent repository of knowledge and literature was destroyed by a series of fires.
This is an official version of the story and for centuries, travelers, historians, and scholars have lamented the loss of the greatest archive of literature in the world.

But what if the destruction was not that extensive as it was popularly believed? Perhaps most of the valuable volumes were saved after all. And if so, where are they?

H. P. Blavatsky has written in "Isis Unveiled" that: "..the Rabbis of Palestine and the wise men say that not all the scrolls and manuscripts, reported in history to have been burned by Caesar, by the Christian mob, in 389, and by the Arab General Amru, perished as it commonly believed..."

Several hours passed between the burning of the fleet, set on fire by Caesar's order, and the moment when the first buildings situated near the harbor caught fire in their turn; and the librarians, aided by several hundred slaves attached to the museum, succeeded in saving the most precious of the scrolls..."

The Library of Alexandria was once the largest library, a storehouse of the world's finest literature. 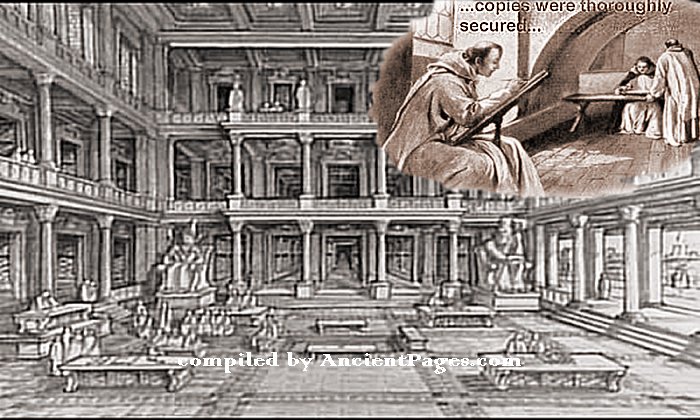 At one time, the Bruckion (palace quarter) of Alexandria contained as many as 400,000 scrolls and manuscripts, all bound in wood and fire-proof parchment, that it was necessary to establish yet another library in the building devoted to Serapis, the mysterious Greco-Egyptian deity of which true identity is shrouded by a veil of mystery.
This deity was a familiar figure among the symbols of the secret Egyptian initiatory rites and most of the ancient Egyptians were totally unaware of Serapis' true character. Not only Serapis' identity is mysterious; even more strange and puzzling is the fact that no archaeological finds that can definitely be attributed to the library have ever been unearthed.

Why was the second library of Alexandria (the Serapeum Library) established in the precincts of the temple of Serapis in the southern part of Alexandria and not in another building or temple belonging to a less mysterious figure?
The building was, without doubt, an impressive structure in the city at the time. Why has no physical proof of its existence ever been found? This fact makes many of us wonder if the library actually existed… Another dilemma, which has never been solved is: Who was responsible for the burning of the Library of Alexandria by fire?

Julius Caesar himself was the most popular suspect in the case. The story tells that during Caesar's occupation of the city of Alexandria in 48 BC., he found himself in the royal palace while being cut off by an Egyptian fleet in the harbor. For his own safety, Caesar ordered the ships in the harbor to be set on fire. Unfortunately, the fire got out of control and spread to the neighboring quarters of Alexandria, also the area where the scrolls and manuscripts were stored. After Caesar's death, it was generally believed that he had burned the library. 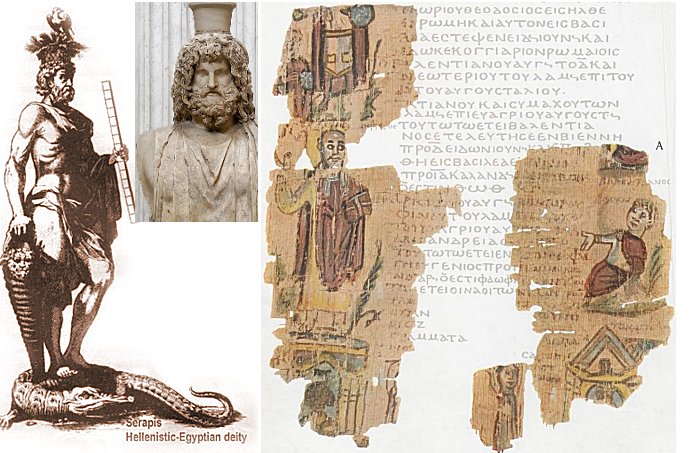 Left: Serapis; Right: Drawing from the Alexandrian World Chronicle depicting Pope Theophilus of Alexandria, the gospel in hand, standing triumphantly atop the Serapeum in 391 AD, source

In his own writings, Caesar wrote about starting the fire in the harbor but never mentioned the burning of the Library.
Roman historian Livy (Titus Livius, 59 BC- 17 AD) wrote in his "History of Rome" that about 40,000 scrolls were burned in the fire started by Caesar. Another Roman historian, Dio Cassius (165 AD - 235 AD) also mentioned the destruction of a storehouse of manuscripts in Alexandria.

However, it seems worth saying that yet another great philosopher, Strabo, who was working in Alexandria in 20 B.C. described the museum as part of the royal palace but he did not mention the famous library at all!
Strabo would certainly mention such an important event as the destruction of the great library, but he did not.

It would suggest that the Library of Alexandria was never destroyed by Julius Caesar and there must still be someone other than Caesar, responsible for this evil act.
Who else could destroy the greatest collection of knowledge ever assembled up to that time? Were some religious fanatics involved in this act of evil? How could a fire destroy all ancients works so completely that not a single manuscript, scroll, or even its fragment was found or earlier saved?

There may also be another version of the story... The greatest collection of knowledge and literature disappeared out of sight but survived by being saved.
It is not entirely inconceivable that some secret societies have preserved handwritten knowledge of which copies were thoroughly secured.

Phalerius said: "Now it is necessary that thou shouldst have accurate copies of them. And indeed this legislation is full of hidden wisdom, and entirely blameless, as being the legislation of God; for which cause it is, as Hecateus of Abdera says, that the poets and historians make no mention of it, nor[Pg 188] of those men who lead their lives according to it, since it is a holy law, and ought not to be published by profane mouths..." (Josephus, "Antiquities," book 12, chap. 2, sec. 4.)

Do the books lie buried somewhere in India, Tibet, or are they still in Egypt, hidden in the Egyptian desert waiting to be unearthed?

Roy MacLeod, The Library of Alexandria

Charles River Editors, The Library of Alexandria: The History and Legacy of the Ancient World’s Most Famous Library