Conny Waters - AncientPages.com - Marine archaeologists from the Viking Ship Museum have found the last of the three wrecked warships from the  'Battle of the Fehmarnbelt' in 1644.

On a cool October day in 1644, the Danish Navy suffered a searing defeat in the Fehmarnbelt south of Lolland. The enemy was a superior Swedish-Dutch fleet. 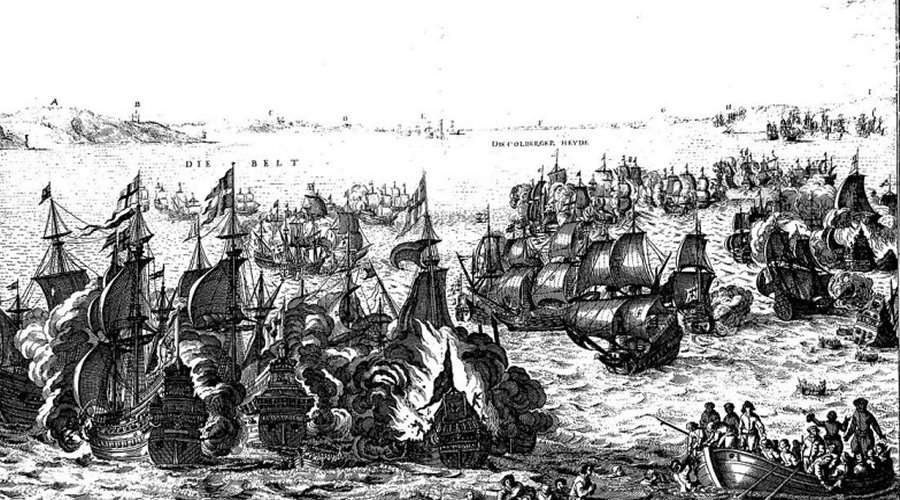 "The Swedes sent a ’brander’ – a burning ship - directly into the Danish warship, which then caught fire and ended up being lost”. source

When the cannon smoke subsided after the battle, the commander of the Danish navy, Pro's mouth, had not only lost his own life, but also 15 out of the 17 Danish ships. Together with the gunpowder smoke, there was also a veil of oblivion in Denmark over the events in the Fehmarnbelt on the 13th of October 1644.

The Swedish-Dutch fleet had sunk two Danish ships and captured a total of 10, while only the Danes managed to lower a single Dutch vessel.

Only two Danish naval ships reached Copenhagen, and three smaller vessels that were stranded on Lolland's Coast after the battle were salvaged by locals.

Now archaeologists have very likely found the last of the three wrecks, the Danish warship ’Delmenhorst'. 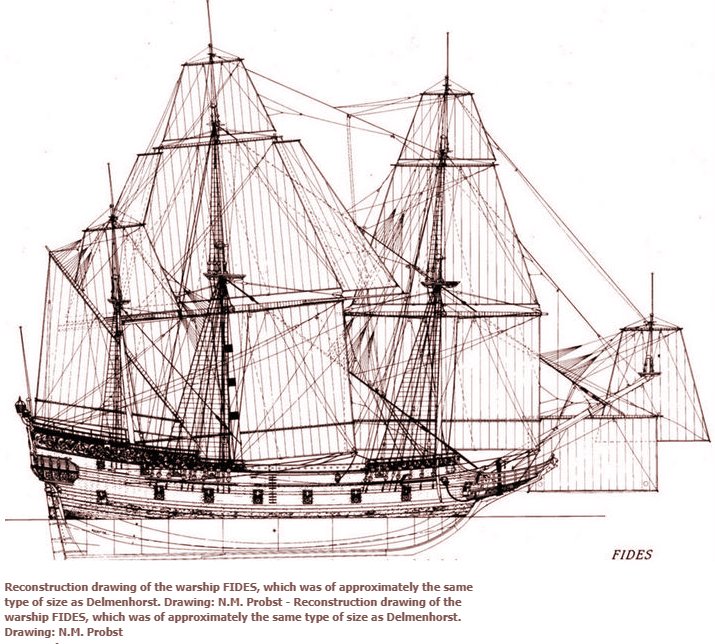 The other two well-preserved wrecked ships - the Danish warship "Lindormen "and the Dutch armed merchant vessel "Swarte Arent" - were found in the Fehmarnbelt and examined in 2012. Both these ships sank during the battle in 1644.

The sensational ship finds have all been made in connection with construction works for the upcoming tunnel to Germany. The marine archaeologists from the Viking Ship Museum have found the shipwreck at 3.5 meters water depth just 150 meters from Lolland's south coast.

"It's an exciting wreck,” said explains Morten Johansen, curator at the Viking Ship Museum in Roskilde, who is responsible for the work. First, it is the last of the sunken ships from the Battle of the Fehmarnbelt in October 1644. Secondly, Delmenhorst is special because it is one of the first ships built after drawing," 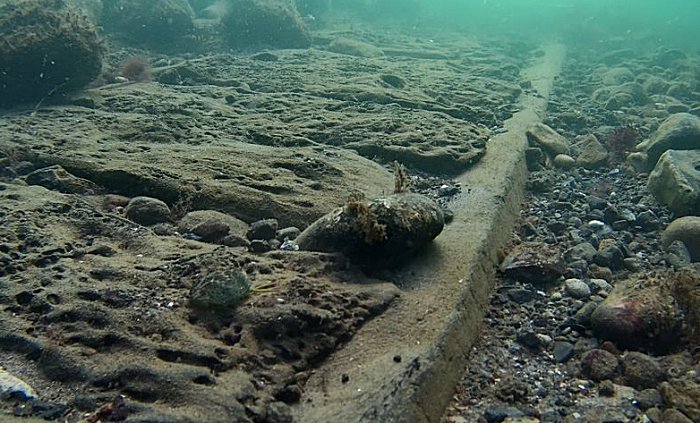 The shipwreck - currently investigated by marine archaeologists from the Viking Ship Museum -
is located on just 3.5 meters of water off the south coast of Lolland. The ship is presumably the Danish warship, DELMENHORST, which burned out and sank during the battle in the Fehmarnbelt
in 1644

The marine archaeologists have dived on the shipwreck over the past 5 weeks but already found the 7 x 31 meters large shipwreck in the spring during routine feasibility studies prior to the construction of new lands south of Lolland.

"We found an oval-ship-shaped, one might say - pile of stones that were densely overgrown with seaweed. It was quickly evident that it is ballast stone from a larger vessel and between stones and algae we could see the ship's frames and thumb-clad planks", says Morten Johansen.

Despite the massive size of the shipwreck, it was a completely different view that made the greatest impression on the divers: 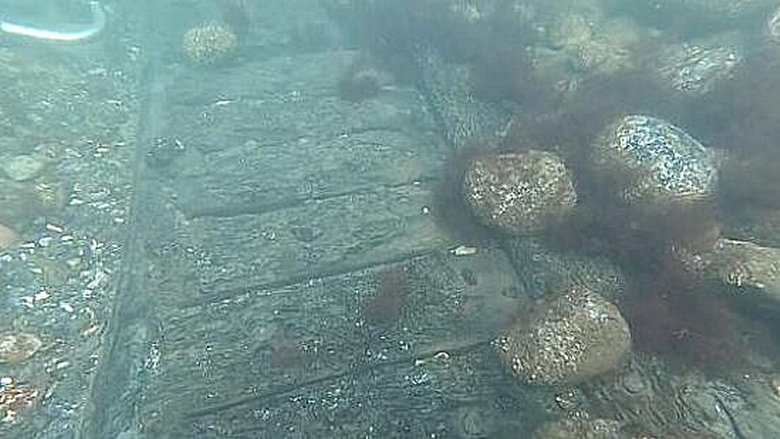 The Delmenhorst will remain on the seafloor for now. Image credit: Viking Ship Museum

” At the very first dive, the sun was shining through the water, causing dozens of broken and melted pieces of bronze cannons to sparkle like gold between the charred debris, " says Morten Johansen.

Precisely the bronze cannons are strong proof that the divers have found a warship, but also found of cannonballs of four different sizes, testifies to the use of the ship.

The obvious traces of fire also help to confirm that the marine archaeologists have found  Delmenhorst.

"In the last hours of the sea battle - out in the afternoon-the crew put Delmenhorst on the ground near the shore, where they hoped to be able to defend the ship with the help of a huge cannon battery inside the shore. The Swedes sent a ’brander’ – a burning ship - directly into the Danish warship, which then caught fire and ended up being lost”, says Morten Johansen.

Now, the team is to measure and collect data and objects from the shipwreck before it is covered with sand and forever embedded in the new beach park to be established on-site. 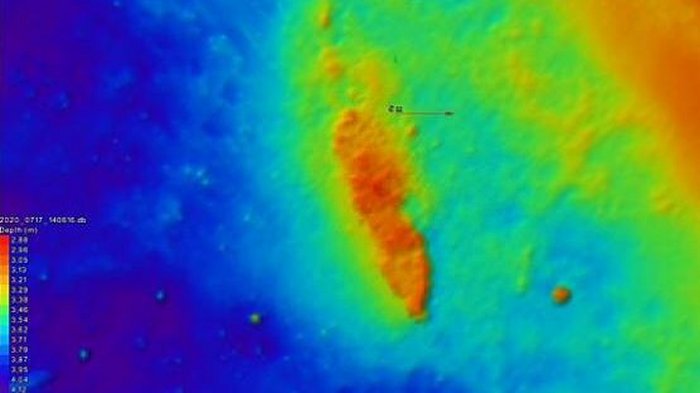 "The ship remains in the environment in which it has been doing well for 400 years. Then we hope that in the future someone will find a method that will ensure that you can get more knowledge out of such a wreck than we are able to pull out of it today, " says Morten Johansen.

Before covering the wreck, the marine archaeologists record nearly 30,000 photos to build a digital 3D model of the entire area.

"In this way, the shipwreck can be exhibited digitally at the museum, even though it is still on the bottom of the sea", says Morten Johansen, who unveils that an exhibition is already underway on the three ships from the excavations in the Fehmarnbelt to be shown at the Viking Ship Museum in 2021.

Battle Of Fehmarn And The End Of Danish Power

The battle took place on Oct 13, 1644. A strong Swedish-Dutch fleet of 42 ships sailed into the Fehmarnbelt and attacked the 17 warships that Denmark had lying here. It really started well for the Danes, who got good shots against the opponents - but ended in a catastrophic defeat, where only two of the 17 Danish ships got away without either being sunk or conquered by the enemy.

Delmenhorst was the last missing ship from the battle in Fehmarnbelt, which was also the last naval battle in ’Torstenssonfejden’ (1643-1645), where Christian IV a few months earlier 'stood at the mound mast' and lost his right eye.

When Christian was crowned king, Denmark-Norway, he held supremacy over the Baltic Sea, which was lost to Sweden during the years of his reign.