Ramesses II – called by his successors and later Egyptians the "Great Ancestor" - is regarded as the greatest, most celebrated, and most powerful pharaoh of the Egyptian Empire. 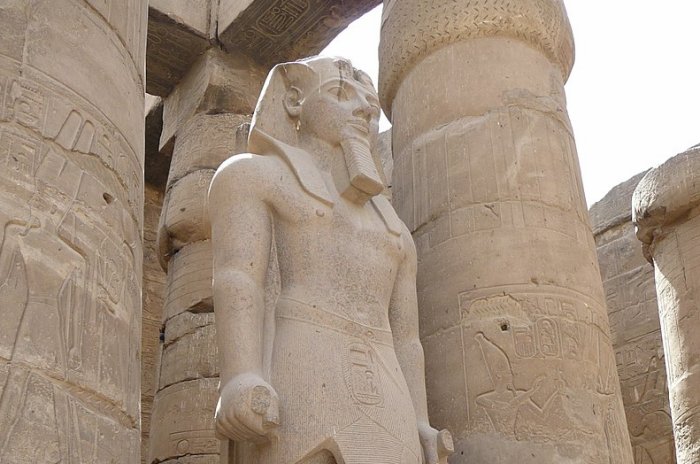 He founded a new capital, Pi-Ramesse, in the eastern Delta, which remained the royal residence throughout the Ramesside period.

Ramesses II led several military expeditions into the Levant, reasserting Egyptian control over Canaan and into Nubia to the south.

For Ramesses II, the most significant historical event in his reign was the battle of Kadesh, fought against the Hittites. He led his smaller force of 20,000 men against the larger Hittite army of 50,000 men.

Although the battle was indecisive, Ramesses returned home a military hero. Later, Ramesses would establish one of the first major peace treaties in history with the Hittites. It helped establish a peaceful northern border throughout the rest of Ramses' rule.

He also built a vast number of temples throughout Egypt and Nubia, of which most famous are the rock-cut temple at Abu Simbel and his mortuary temple at Thebes, the Ramesseum. The tomb of his principal wife, Nefertari, at Thebes is one of the best-preserved royal tombs.

The tomb of many of his sons was also found in the Valley of the Kings (KV5).

The truth is that certain activities undertaken by him were only focused on remodeling of already  existing works, improving masonry techniques, and using art as propaganda for his victories over foreigners, which are depicted on countless temple reliefs.

In Thebes, the ancient temples were also transformed, so that each one of them reflected honor to him only as a symbol of his power and divine nature.

The elegant but shallow reliefs of previous pharaohs were easily transformed, and so their images and words could easily be obliterated by their successors. Ramesses insisted that his carvings be deeply engraved into the stone, which made them not only less susceptible to later alteration, but also made them more prominent in the Egyptian sun, reflecting his relationship with the sun deity, Ra.

His cartouches are also displayed even in buildings that he did not construct.

He also founded a new capital city in the Delta during his reign, called Pi-Ramesses. It previously had served as a summer palace during Seti I's reign.
Ramesses also undertook many new construction projects. Two of his biggest works, besides Pi-Ramesses, were the temple complex of Abu Simbel and the Ramesseum, a mortuary temple in western Thebes.

Ramesses II was buried in the Valley of the Kings, and archaeologists located his body in the Deir el-Bahari.