Conny Waters - AncientPages.com - An ancient sculpture of Lord Vishnu, belonging to the Pandya period has been found at the western bank of Gundaru River at Ulagani village, Tamil Nadu in the southernmost part of the Indian subcontinent. 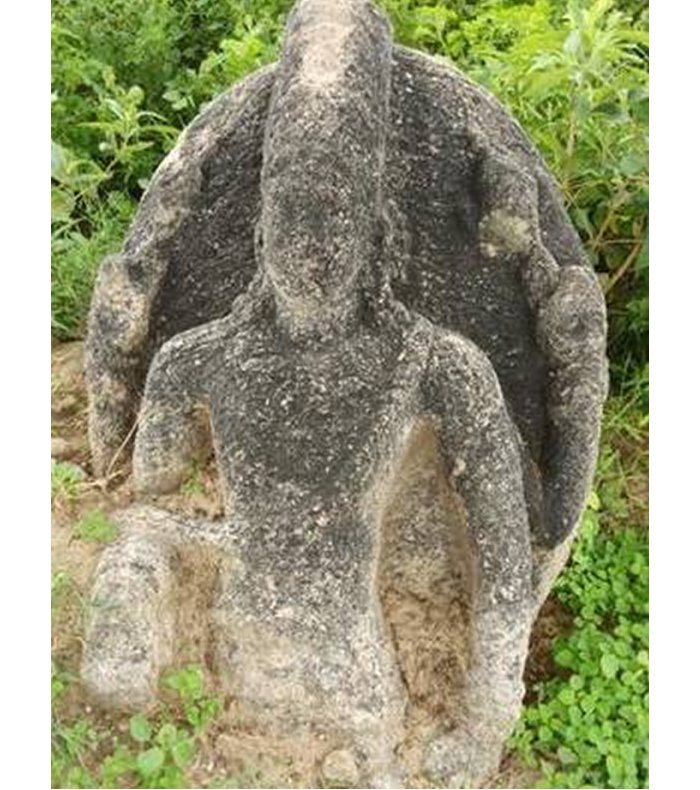 A sculpture of Lord Vishnu dated to the 8th century belongs to the Pandya period, was found at the western bank of Gundaru river at Ulagani village of Kallikudi block in Madurai. Image source

M. Maruthu Pandiyan from Madurai Government said that the features of the sculpture indicated that it belongs to the Pandya period and the Pandyans, an ancient Tamil kingdom in South India. Pandyas were one of the three ancient Tamil kingdoms (Chola and Chera being the other two) that ruled the Tamil country from pre-historic times until the end of the fifteenth century.

“Mainly, the sacred thread of the sculpture goes above the right forearm and a broad ‘kanthi' (necklet) studded with big gems adorns the neck. Similar sculptures of Pandya period have been found in various places such as Thirumalapuram, Tirupparankundram, and Sevalpatti,” M. Maruthu Pandiyan said as cited by The Hindu.

Mr. Maruthu Pandiyan described the sculpture of Lord Vishnu as having four hands. Among them, two arms are held up vertically. The right arm has a broken chakra and in the left arm a conch.

“The chakra and conch are the main features of the Pandya period."

In Hindu beliefs, the three gods Brahma, Shiva, and Vishnu, are worshiped as the Great Trinity (Trimurti). They are all important and generally equal in their power and influence they represent three aspects: creation, preservation, and destruction. The Hindu trinity symbolizes perfection, where Brahma is associated with strength and power; Shiva wins the war thanks to his brutality and impetuous, ruthless character, and Vishnu is a loving God who has a special place in the hearts of his believers.

The Hindu god Vishnu is the pervader ("one who is everything and inside everything"), protector and preserver as he is connected to the sacred nature. The mountains are his bones, the clouds hair on his head, the air his breath, the rivers his blood vessels, and the trees are the hairs of his body. We must not forget his eyes that represent the sun and the moon, respectively, where the movements of the eyelids symbolize the transition between day and night.

The village has also been mentioned in a book about the inscriptions of Madurai district, which was released by the State Archaeology Department. The book mentions that this village had an old name, ‘Kulasegara chathurvethimangalam or Ulagunimangalam.”