Conny Waters - AncientPages.com -An ancient wall foundation around Lolei Temple - built in 893 BC and one of three late 9th-century Hindu temples at Angkor, Cambodia - has been unearthed by the Apsara National Authority (ANA) archeologists. 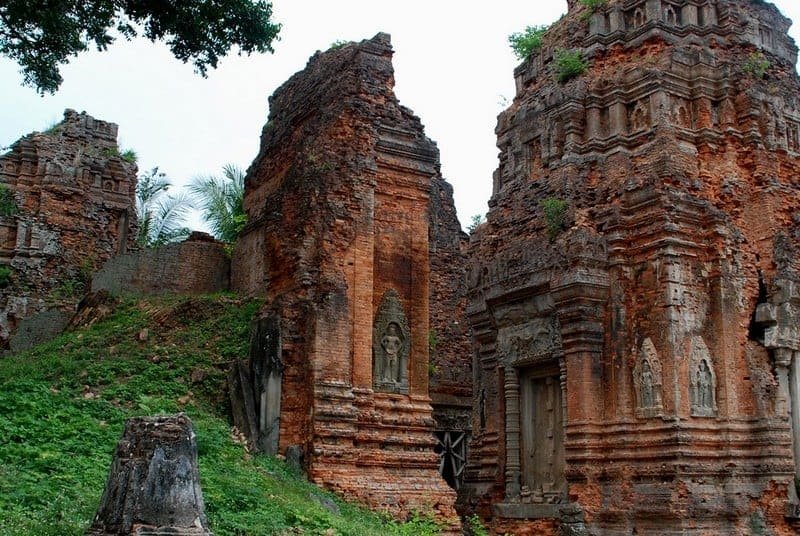 Lolei was the last major temple to be built in what was once the capital city of the Khmer empire before King Yasovarman I moved the capital to what is now Angkor Thom.  source

Archaeologists say the ancient structure has been buried for more than 100 years under other historic religious constructions. It is also believed that the unearthed foundation was once a library, reports The Phnom Penh Post.

The Lolei Temple - located in Lolei village, Bakong Commune, Roluos, Siem Reap, Cambodia - was the last of the three temples to be built as part of the city of Hariharalaya that once flourished at Roluos, and in 893 the Khmer king Yasovarman I dedicated it to Shiva and to members of the royal family.

ANA specialists opened the excavation site in mid-March and planned to complete it in June to begin a restoration project.

According to the ANA's announcement in a Facebook post, the archaeologists have begun their research and spotted wonderful mysteries of many ancient construction structures such as gates, floors, ceramics, and walls buried under religious construction since the French colonial era.

“The discovery of this gigantic structure helps to provide new data for archaeological research, history, architecture, and conservation, to develop and uphold Lolei Temple better than before,” the post read. 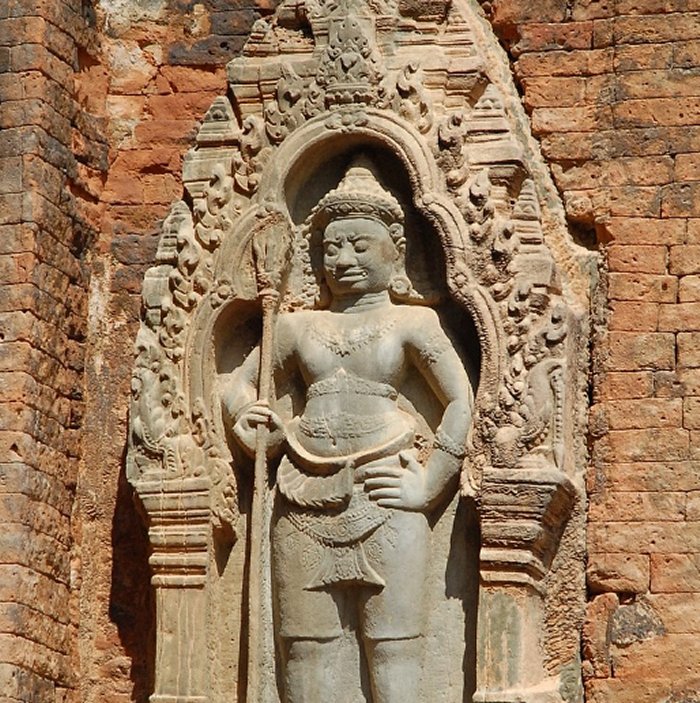 This sandstone carving at Lolei shows a fanged dvarapala armed with a trident standing in an arched doorway. At the level of his elbows, two makara heads face outward. source

Tho Thon, an archaeologist at the Department of Conservation in Angkor Archeological Park and also the head of the research team at Lolei Temple said that a working group had opened 10 excavation pits under former religious construction sites in the east, north, and west of the temple.

He said upon opening the pits, the group spotted the gates leading in three directions. Thon said the specialists are further studying the excavation pit as they suspect the walls to be a library. All excavation pits are currently undergoing research. 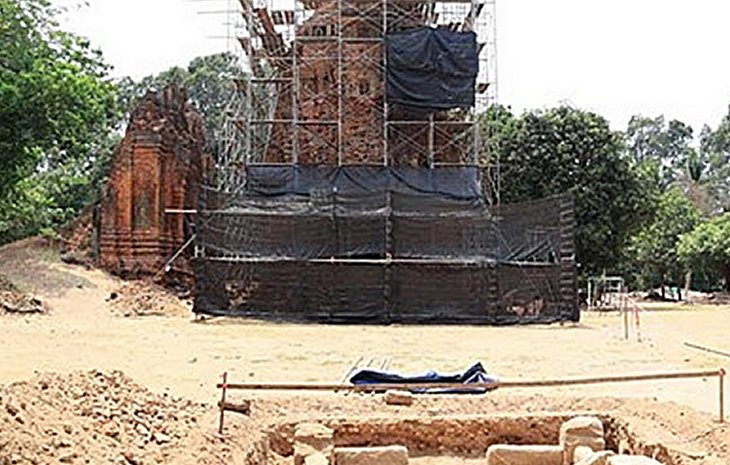 Archaeologists have unearthed what is thought to be an ancient library near Lolei Temple.  Image credit: Apsara National Authority

“We began to remove soil that buried the towers at a depth of 20cm to 40cm to see the wall foundation of the ancient temple as the tower was not buried deeply.

“This foundation has been buried for a long time. If we remove all the soil, it is exposed to wind and can be damaged,” he said.

On the reason for the buried structure, Thon concluded that perhaps builders in that time forgot that there was something underneath because the soil had filled the ancient construction.

“We do this for the body of the temple not to collapse because the four towers date back to the French colonial era – all the towers stand tall.

“But later they can collapse as the temple was built with bricks. It can collapse easily and is more difficult to repair than a stone temple. We will repair it. It is really good for younger generations and tourists,” Thon said.