Conny Waters - AncientPages.com - An international team of scientists has found clear evidence for a link between astronomically-driven climate change and human evolution.

According to the new study published in Nature early human habitats are linked to past climate shifts. 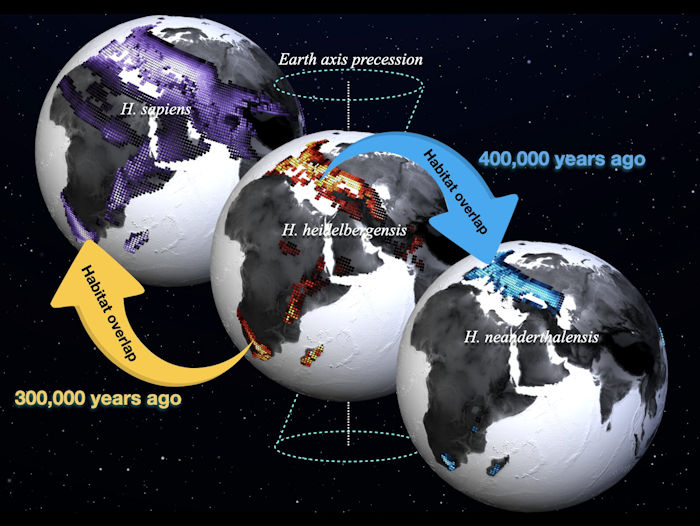 By combining the most extensive database of well-dated fossil remains and archeological artifacts with an unprecedented new supercomputer model simulating earth's climate history of the past 2 million years, the team of experts in climate modeling, anthropology and ecology was able to determine under which environmental conditions archaic humans likely lived.

The impact of climate change on human evolution has long been suspected, but has been difficult to demonstrate due to the paucity of climate records near human fossil-bearing sites. To bypass this problem, the team instead investigated what the climate in their computer simulation was like at the times and places humans lived, according to the archeological record.

This revealed the preferred environmental conditions of different groups of hominins. This study considers the following hominin species: Homo sapiens, Homo neanderthalensis, Homo heidelbergensis (including African and Eurasian populations), Homo erectus and early African Homo (including Homo ergaster and Homo habilis). From there, the team looked for all the places and times those conditions occurred in the model, creating time-evolving maps of potential hominin habitats.

"Even though different groups of archaic humans preferred different climatic environments, their habitats all responded to climate shifts caused by astronomical changes in earth's axis wobble, tilt, and orbital eccentricity with timescales ranging from 21 to 400 thousand years," said Axel Timmermann, lead author of the study and Director of the IBS Center for Climate Physics (ICCP) at Pusan National University in South Korea.

To test the robustness of the link between climate and human habitats, the scientists repeated their analysis, but with ages of the fossils shuffled like a deck of cards. If the past evolution of climatic variables did not impact where and when humans lived, then both methods would result in the same habitats. However, the researchers found significant differences in the habitat patterns for the three most recent hominin groups (Homo sapiens, Homo neanderthalensis and Homo heidelbergensis) when using the shuffled and the realistic fossil ages.

"This result implies that at least during the past 500 thousand years the real sequence of past climate change, including glacial cycles, played a central role in determining where different hominin groups lived and where their remains have been found", said Prof. Timmermann.

"The next question we set out to address was whether the habitats of the different human species overlapped in space and time. Past contact zones provide crucial information on potential species successions and admixture," said Prof. Pasquale Raia from the Università di Napoli Federico II, Naples, Italy, who together with his research team compiled the dataset of human fossils and archeological artifacts used in this study.

"Our climate-based reconstruction of hominin lineages is quite similar to recent estimates obtained from either genetic data or the analysis of morphological differences in human fossils, which increases our confidence in the results," remarks Dr. Jiaoyang Ruan, co-author of the study and postdoctoral research fellow at the IBS Center for Climate Physics.

The new study was made possible by using one of South Korea's fastest supercomputers named Aleph. Located at the headquarters of the Institute for Basic Science in Daejeon, Aleph ran non-stop for over six months to complete the longest comprehensive climate model simulation to date.

"The model generated 500 Terabytes of data, enough to fill up several hundred hard disks," said Dr. Kyung-Sook Yun, a researcher at the IBS Center for Climate Physics who conducted the experiments. "It is the first continuous simulation with a state-of-the-art climate model that covers earth's environmental history of the last 2 million years, representing climate responses to the waxing and waning of ice-sheets, changes in past greenhouse gas concentrations, as well as the marked transition in the frequency of glacial cycles around 1 million years ago," adds Dr. Yun. 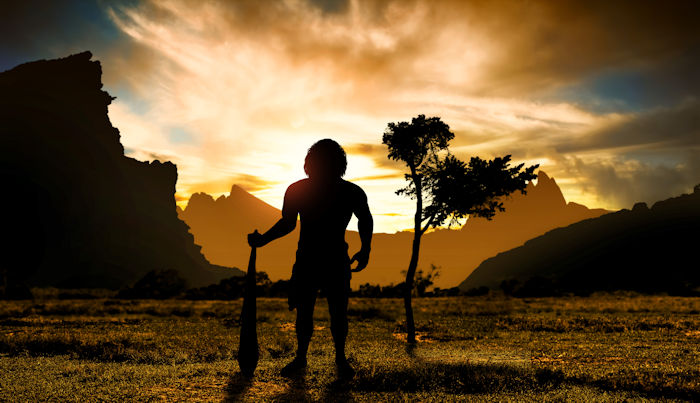 "So far, the paleoanthropological community has not utilized the full potential of such continuous paleoclimate model simulations. Our study clearly illustrates the value of well-validated climate models to address fundamental questions on our human origins," says Prof. Christoph Zollikofer from the University of Zurich, Switzerland and co-author of the study.

Going beyond the question of early human habitats, and times and places of human species' origins, the research team further addressed how humans may have adapted to varying food resources over the past 2 million years. "When we looked at the data for the five major hominin groups, we discovered an interesting pattern. Early African hominins around 2-1 million years ago preferred stable climatic conditions.

This constrained them to relatively narrow habitable corridors. Following a major climatic transition about 800 thousand year ago, a group known under the umbrella term Homo heidelbergensis adapted to a much wider range of available food resources, which enabled them to become global wanderers, reaching remote regions in Europe and eastern Asia," said Elke Zeller, Ph.D. student at Pusan National University and co-author of the study.

"Our study documents that climate played a fundamental role in the evolution of our genus Homo. We are who we are because we have managed to adapt over millennia to slow shifts in the past climate," says Prof. Axel Timmermann.