Conny Waters - AncientPages.com - A precious sandstone head of a Bodhisattva has been unearthed near Ta Nei, a late 12th century stone temple in Angkor, Cambodia.

The Apsara National Authority technical team was attempting to find the temple’s roof stone, which had fallen into a pile of stones in land covered with anthills. That’s when they discovered the head of the statue. The head measures 54cm in height, 27cm in width and has a depth of 36cm and the rest of the body has not yet been found. 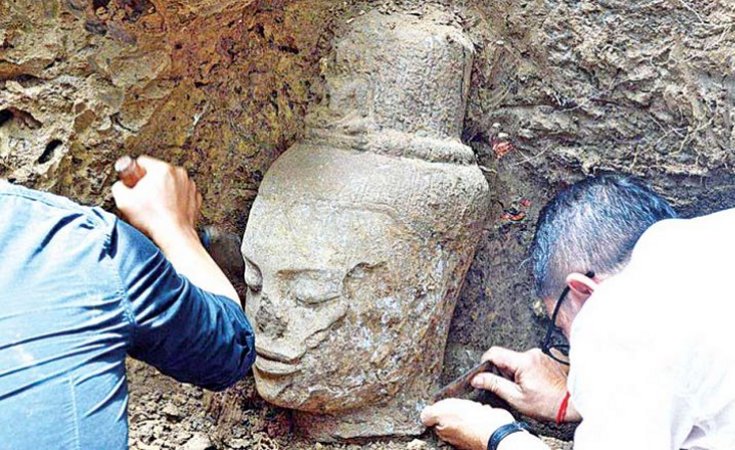 The Phnom Penh Post reports, “the right ear is still intact but the left one is missing and it has a scraped nose with one side of the cheek damaged.”

“Firstly, we cannot determine what caused the damage to the cheek. It might be a result of the statue crashing into something. Although the statue was uncovered at the location, there is no evidence to show the torso of the statue lies in the spot where we uncovered the head,” researchers said.

Chhouk Somala, an officer in charge of archaeological registration at the Department of Monuments and Preventive Archaeology explained he Bodhisattva statue’s head was carved in the Bayon style during the late 12th and early 13th centuries, during the reign of Jayavarman VII.

In Mahayana Buddhism, the statue head is known as the Avloketesvar Bodhisattva, also known as “Guanyin” who embodies the compassion of all Buddhas.

In Khmer art, this kind of statues has two, four, or eight arms, holding Buddhist strings, books, a rose, and a vase. Also, the statue was carved like Bodhisattva Buddha.

The stonehead will now be cleaned and studied. The goal is to put it on exhibit in the near future. Archaeologists also hope they may find more precious ancient artifacts in the vicinity of the Ta Nei temple.