AncientPages.com - Longvek was the capital city in ancient Cambodia, for almost 200 years following the sack of Angkor by the Siamese in 1431.

Longvek or Lovek (in Khmer language - "intersection" or "crossroads") was located  less than 50 kilometres from Phnom Penh in present-day Kampong Chhnang province. Little more than a village today,  Longvek was once selected to built the city because the place with good condition to protect from enemy. 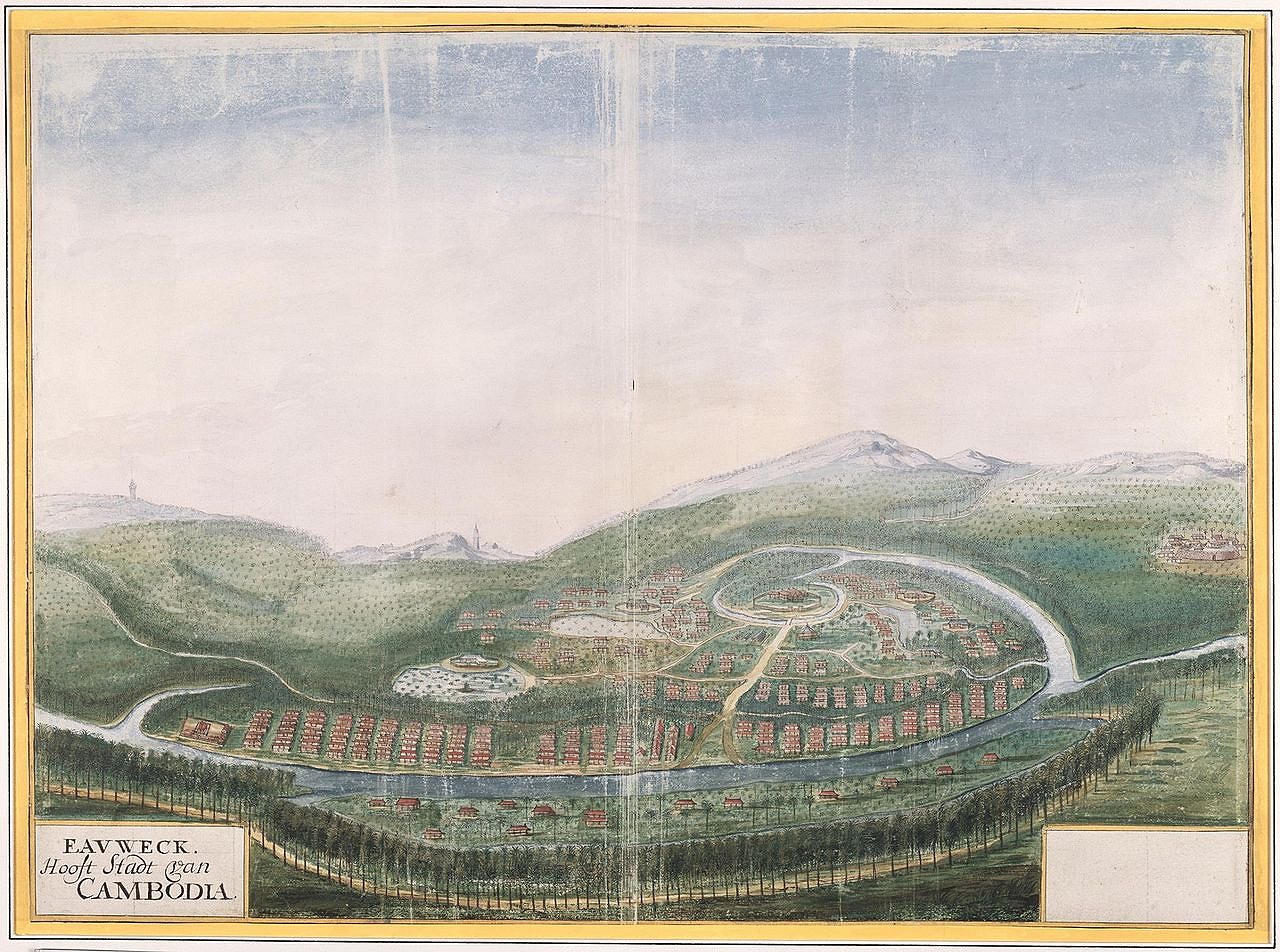 Bird's eye view of Eauweck (or Longvek), Cambodia. The city of Eauweck, shown in the centre of this illustration, is surrounded by hills, forests and a river. Bottom left the inscription reads Eauweck. Hooft Stadt van Cambodia, Photo: Wikipedia

It was surrounded by thick bamboo forest of about 160 meters wide and many big lakes. Longvek was built in a rectangular shape with 3km long and 2km wide. Rumor said that a strong horse could not run around Longvek military camp and that there were statues of Preah Ko and Preah Keo, the two brothers, regarded as sacred figures, kept in Longvek.

Later, the statues were removed and taken to Siam after Longvek city has been defeated in 1593.

Now, the first archaeological excavations at the site of the ancient Cambodian capital of Longvek have unearthed physical evidence that the city was a regional trading hub, helping dispel historical notions that Cambodia underwent centuries of “dark ages” between the Angkorian and the modern era. 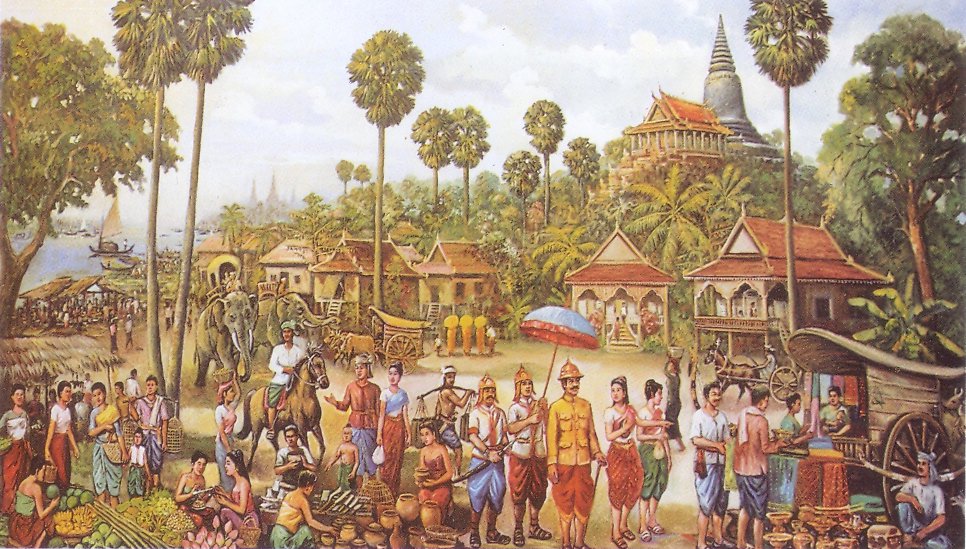 Longvek was selected to built the city because the place with good condition to protect from enemy. It was surrounded by thick bamboo forest of about 160 meters wide and many big lakes. Longvek was built in a rectangular shape with 3km long and 2km wide. Credits: ICambodia

The Phnom Penh Post writes in an article that archaeologists discovered porcelain from as far away as China and Japan in the foundations of Longvek’s ancient palace, along with ruins of substantial earthen walls and a bronze workshop.

“Archeologists, historians, tourists and the general public – everyone tends to focus on Angkor’s golden age, and when you go to Angkor you can see the reason why,” said Dr Martin Polkinghorne, a research fellow at Flinders University in Australia who is part of a joint team composed of Cambodia’s Ministry of Culture, Flinders and Japan’s Nara Institute.

“But of course Cambodian history continued and was intimately tied to international trade.”

Polkinghorne said Cambodia’s trading wealth was largely based on exporting forest products such as hardwood and animal skins. 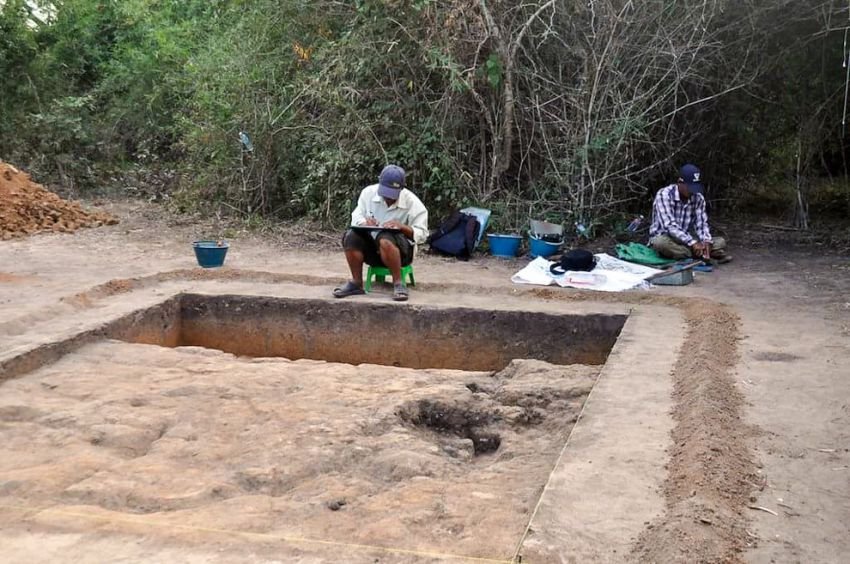 In exchange, Cambodia obtained goods such as the Chinese porcelain in the palace, which was dated to the late Ming dynasty in the 16th century, while other pieces of porcelain were found originating from Japan, Vietnam and Thailand.

Polkinghorne said Longvek’s location on the Mekong River was no coincidence.

“One of the reasons Angkor declined was to take advantage of maritime trade. These new capitals were situated close to the sea to benefit.”

The joint archaeological team began a four-year study of Cambodia’s post-Angkor capitals last November. Excavations at Longvek lasted throughout December and the team aims to return there later this year.

Although Polkinghorne said he believed the team was the first to excavate the little-examined capital, he warned that urbanisation from Phnom Penh was at risk of damaging the site, which is not part of a conservation zone like Angkor in Siem Reap.

Son Soubert, an opposition politician who lectures on art history at the Royal University of Fine Arts and studied archaeology in France, said he expected historians to be less prejudiced against Cambodia’s supposed “dark age” due to the era’s increasingly visible trade links.