A. Sutherland  - AncientPages.com - In Colombian folklore, the Patasola (‘La Patasola’) is a female monster living on the summits of the plain. She has only one leg but can move with amazing speed.

People claim to have seen her jumping on one leg, through saws, ravines and roads, screaming mournfully. It is the soul in pain of the unfaithful woman who roams mountains, valleys and plains, who dishonored her children and failed to respect her husband. 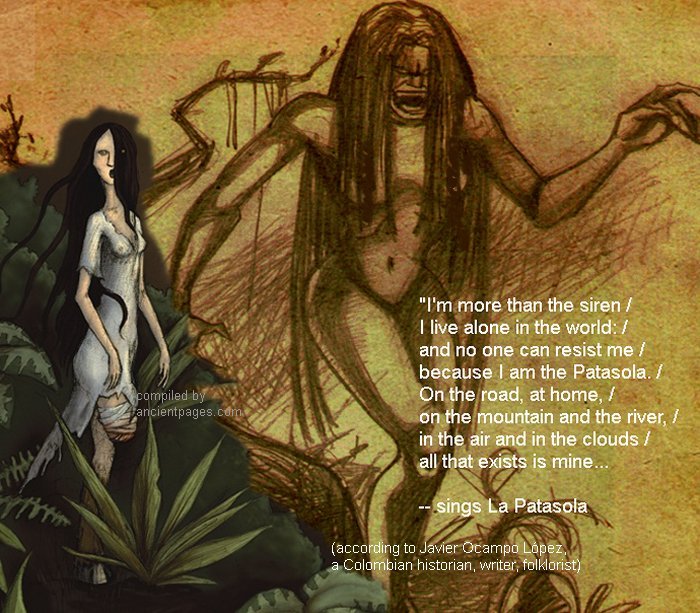 She is a dangerous, malevolent vampire and an enemy of men that only hates and spreads terror. This female vampire is feared by settlers, hunters, miners, farmers, walkers, lumberjacks and among them, she especially torments and lures unfaithful husbands. She has supernatural powers and can change her appearance (also into animals, like a cow or large black dog) by crying for help.

Disguised as a beautiful and seductive, young woman, the Patasola attracts an unsuspecting man or a walker and lures him away from his companions to the deepest places of the jungle. There, she reveals her true, hideous appearance and vicious vampire-like lust for human flesh and blood.

The Patasola is not only harassed by an old guilt and possessed by hatred, she also has an ugly appearance. She has wild and fuzzy eyes, disproportionate mouth showing feline teeth and hair disheveled and entangled like the lianas of the jungle that falls on her face to hide her ugliness. In other descriptions, she is described as possessing bulging eyes, catlike fangs, one breast, a hooked nose as Baba Yaga in Slavic mythology, and big lips.

But her most distinguished feature is her one leg.

Roaming the forests and wild, uninhabited and uncultivated areas, she spends her time looking for her next victim to attack and devour the flesh or sucking his blood.

As a vampire, she hates the blue skies, water and the sunrise. Her kingdom belongs to the twilights and the dark nights. Sometimes, the Patasola forgets her bad feelings and begins to sing or waits for the appearance of the moon in the sky.

Tradition has it that the Patasola or ‘one foot’ was once a beautiful married woman with children. Her husband, however, had some serious reasons to be jealous, so he decided to find out whether his wife was really disloyal to him. He unfortunately discovered that she indeed disrespected their wedding vows. He was so furious and jealous that he struck her lover with an axe and unintentionally also mutilated her by chopping off one of her legs, as if it were the branch of a tree.

Then, he took their three children, set the house on fire, and fled the town. The Patasola’s ghostly apparition was claimed to be seen in the woods; she was jumping on her one leg, groaning and moaning: Wandering through lonely farms, forests and jungles since that terrible night, the Patasola  has only one goal: revenge.

Another version of the story says that the Patasola was a mother who killed her own son, and was then banished to the woods as punishment.

Others described her as sexually alluring woman who repeatedly seduced or manipulated others; besides, she was also cruel to both men and women, and for this reason they mutilated her with an axe. She died of her injuries and became a malevolent ghost who haunts the forests and mountain ranges.