Conny Waters - AncientPages.com - Large coffin of King Tutankhamun is now under restoration for first time since 1922.

Almost a century after its discovery, the largest gilded coffin of King Tutankhamun has been transported from the tomb in Luxor’s west bank to the new Grand Egyptian Museum (GEM). 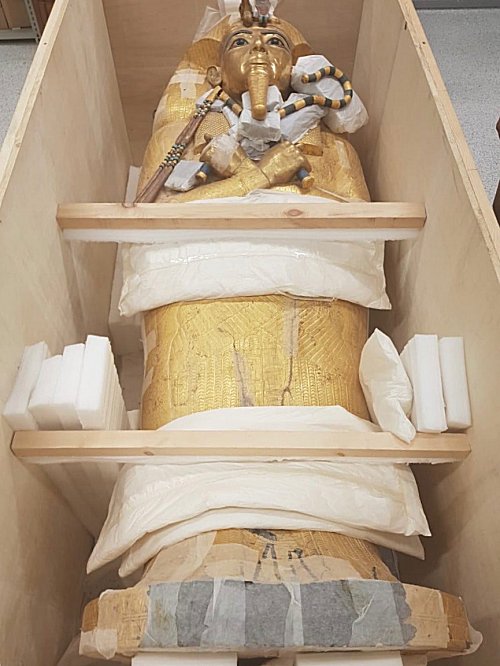 The gilded coffin of Tutankhamun is at the Grand Egyptian Museum for restoration for the first time ever. The coffin was transported from his tomb in Luxor. source

Unfortunately, the coffin was suffering varied forms of decay like for example, cracks in its gilded layers.

The gilded coffin of King Tut was the only one left in the boy king’s tomb in Luxor’s west bank after the removal of two others to the Egyptian Museum in Cairo in 1922.  The three coffins were found on each other. The smallest one is carved of pure gold while the two others are made of wood coated with layers of gold plaster.

The coffin was moved amid tight security measures and under the supervision of archeologists and in cooperation with the Tourism and Antiquities Police.

“At the opening of the GEM in 2020, the boy king’s three coffins will be together for the first time ever,” Al-Tayeb Abbas, director general of antiquities at the GEM, informed.