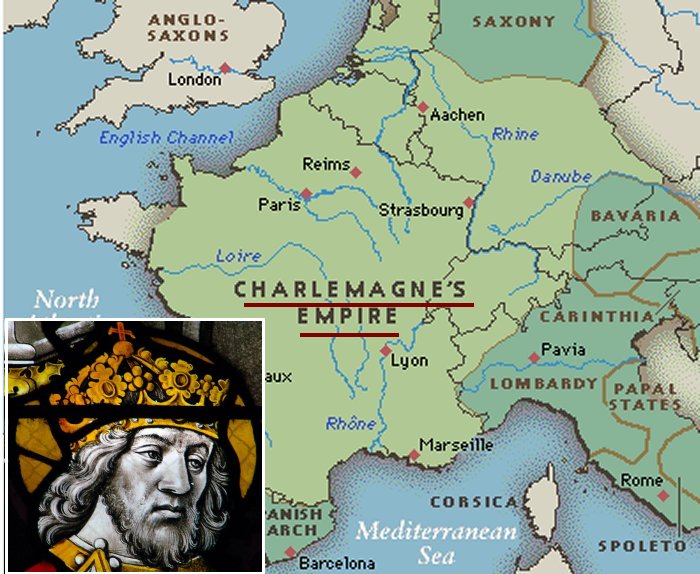 After Carloman died in 771, Charlemagne became the leader of the reunified Frankish kingdom, which he ruled from several cities.

He was engaged in many military battles during his reign. He conquered Saxony in the 8th century, but winning the fight over the Saxons was no easy task. He spread Christianity into Northern Europe by forcing Catholicism on the conquered people and slaughtering those who refused to convert.

Charlemagne financially supported churches and protected the popes. He also made churches function as refugee shelters.

Charlemagne spent the early part of his reign on several military campaigns to expand his kingdom. He invaded Saxony in 772 and eventually achieved its total conquest and conversion to Christianity. He also extended his dominance to the south, conquering the domain of the Lombards in northern Italy and invading north Spain in 778.

In 800, a rebellion against Pope Leo III began. Charlemagne went to his aid in Rome and defeated the rebellion. As a token of thanks, Leo crowned Charlemagne on Christmas Day that year, declaring him Emperor of the Romans.

He also attempted to consolidate Christianity throughout his vast empire and established a new library of Christian and classical works.

Charlemagne was the founder of the Holy Roman Empire; he was Emperor of the Romans from 800 when Pope Leo III acknowledged him as a ruler at Mass on Christmas day at St. Peter’s Basilica in Rome and gave him the title of Roman Emperor.

Pope John Paul II referred to him as the Pater Europae (“father of Europe”).