While investigating the site scientists noticed the 3,000-year-old settlement located in Cambridgeshire was destroyed by catastrophic fire just one year after it had been built. 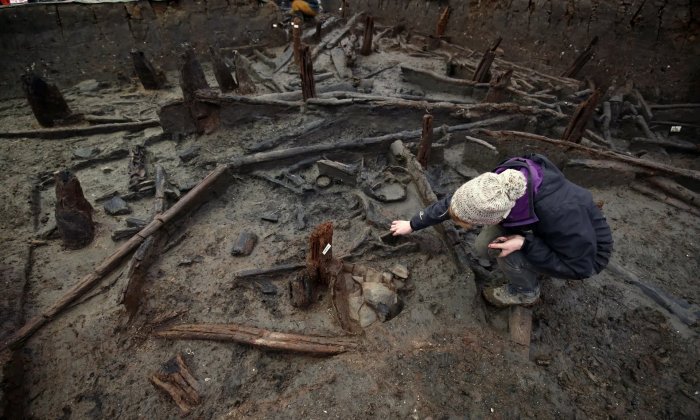 An archaeologist works on the site destroyed by a fire 3,000 years ago at Must farm quarry in Cambridgeshire. Photograph: Chris Radburn/PA

Known as the British Pompeii, the site is the best-preserved Bronze Age dwellings ever found in Britain.

Based on beads discovered at the site, scientists think the settlers of the Pompeii of the Fens traded with people from other from the Mediterranean or Middle East.

The timber preservation is excellent at the site and at least five circular houses raised on stilts were found at the settlement, with each having an area for storing meat and another section for cooking or preparing food.

But why did the settlement with large circular wooden houses built on stilts above water, collapse in a dramatic fire 3,000 years ago and plunged into a river?

New research published in the journal Antiquity offers a detailed look into Must Farm and what might have happened at the site.

Archaeological excavation at Must farm reveal that when the horrible fire broke out, people fled leaving their clothing and jewelry, tools and furniture. Trying to escape the catastrophic fire, inhabitants abandoned meals in the cooking pots and ran for their lives.

The wooden structures caught fire and plunged into the river. The water helped to preserve these ancient structures and today we can gain more information about the daily life in the Bronze Age settlement that is estimated to have been constructed between 1100 and 800 B.C. 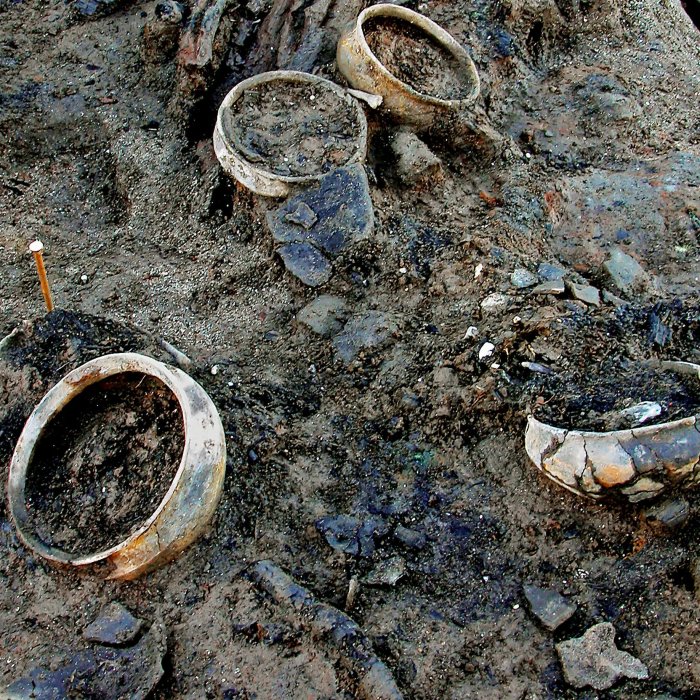 Whole pots with food inside unearthed at Must farm. Photograph: Dave Webb/Cambridge Archaeologic/PA

There are thousands of objects astonishingly preserved in the mud and it will take years to examine the entire site. The British Pompeii is an exceptionally well-preserved ancient time capsule.

“Elsewhere we only have the ghosts of what was going on – here we have the whole body,” said Graham Appleby, who is working on the most metal objects ever found on a domestic site of the period, including a spear head so pristine it has been mistaken even by experts for a replica.

“We have only found out half of what this site has to tell us,” said the site’s director, Mark Knight, from Cambridge University’s archaeology unit.

“On other bronze age sites you’d have a row of post holes and you’d be delighted to find one pot shard. Here we have looked through the window and then walked into the middle of their lives.”

“The unprecedented richness of the finds has revealed how the people lived, what they wore, what they ate, the butchered lamb carcasses they cured hanging from their rafters, the remains of a slaughtered red deer still sprawled on a patch of gravel. They farmed animals and cereal crops, including ancient strains of wheat and barley, and though they chose to live over the water, they had such lavish food sources that they virtually ignored the fish swimming just below their wicker floors.”

Much is known about the inhabitants of Must Farm, and the place offers a unique snapshot of Bronze Age life, but the greatest mystery remains unsolved. What caused the fire?

The settlement featured at least five stilted structures, an internal walkway, and a fence that enclosed the group of dwellings.

Analysis of the wooden beams found at the site showed the timbers were still fresh when the fire took hold. What’s more, there’s no evidence that the structure ever underwent repairs.

Taken together, this evidence suggests the settlement was only about a year old when the fire struck, as the authors wrote in the new study: “The emerging evidence suggests that one year is a reasonable estimate for the length of settlement occupation. Ongoing dendrochronological analysis of the structural timbers reveals that the settlement was built in a single construction phase, using wood of a similar felling year.

The same analysis also shows differential sapwood shrinkage on areas of individual oaks protected from, and exposed to, the fire, which suggests that the timbers were still green, or unseasoned, when the settlement was destroyed by fire. Oak timber is broadly accepted to require one to two years to season under natural conditions in Britain.” 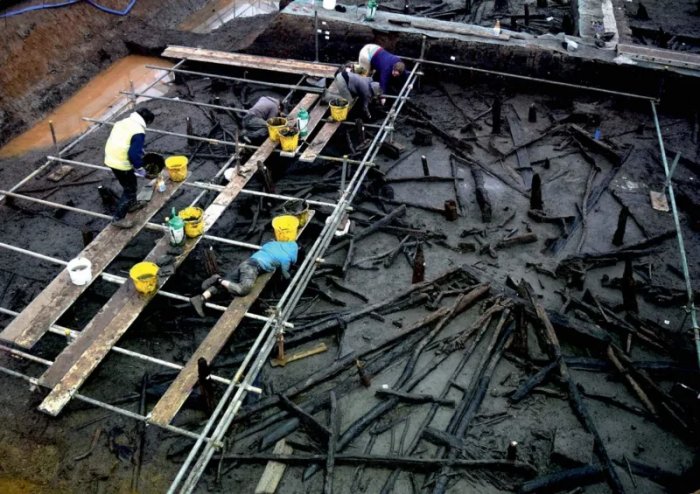 Archaeologists at the Must Farm site. Image: D. Webb

Whether Must Farm really should be called the British Pompeii is a matter of opinion.

Mark Knight from the Department of Archaeology at the University of Cambridge said the name is both a blessing and curse.

“In broad terms the site fits the allegory perfectly: a snapshot of a once living community, stopped at a moment in time. The danger however, is that we see the site as a frozen moment in time, presenting what others have described as a kind of ideal, systemic inventory,” Knight told Gizmodo. “In reality, the settlement endured, it had time as well as space and things were consumed and discarded. The foreshortened temporality of the site together with the exceptional preservation made it seem more ‘ethnographical’ than ‘archaeological’ but it was still dynamic and protracted.”

Archaeologists will continue to examine Must Farm for many years to come and more information about this special Bronze Age place will undoubtedly be soon available to the public.