Conny Waters - AncientPages.com - Archaeologists have recovered as many as 2,550 wooden objects from the Templo Mayor in the Aztec city of Tenochtitlan in Mexico City. The rescued objects have survived more than 500 years submerged in water, some completely flooded.

As explained on AncientPages.com earlier, the “most important sacred temple complex of the Aztecs - the Main Temple (in Spanish: Templo Mayor) was built in the center of the Aztec capital Tenochtitlán. 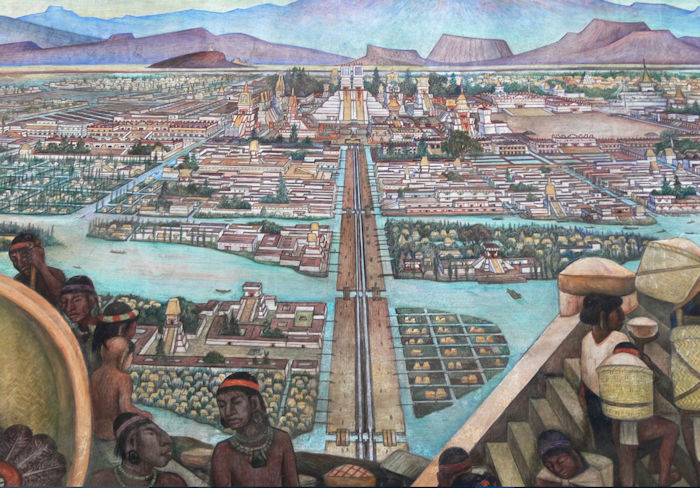 Mural by Diego Rivera of the Aztec city of Tenochtitlan and life in Aztec times. Credit: Public Domain

According to Aztec chronicles, the first temple (later followed by its twin temple) was built after 1325 and enlarged several times over the course of the 14th and 15th centuries.

The twin temples were dedicated to the god of rain and fertility, Tlaloc ("the one who makes sprout"), and Huitzilopochtli, god of war and sun.

Aztec chronicles confirm that both gods were frequently appeased with human sacrifices and other public rituals that took place in the temple.”

Scientists report the extraordinary offerings found at the foot of the Great Temple of old Tenochtitlan include darts, dart throwers, pectorals, earrings, masks, ornaments, earmuffs, sceptres, jars, headdresses, a representation of a flower and another of bone, all found in the ritual deposits made by the priests to consecrate a building or make a request to the Aztec gods.

A high and constant level of humidity, little oxygen, and light, as well as minimal temperature fluctuations, contributed to the preservation of the organic remains to this day.

However, due to their natural vulnerability, the rescued objects must be handled with proper care.

Experience has taught scientists how easy such artifacts can be destroyed. In the 1960s, a wooden mask was recovered from the Templo Mayor site. The ancient object was brought to the INAH laboratories and after a few hours, it fell to dust.

Today, scientists have gathered knowledge to take care of objects that are so vulnerable. 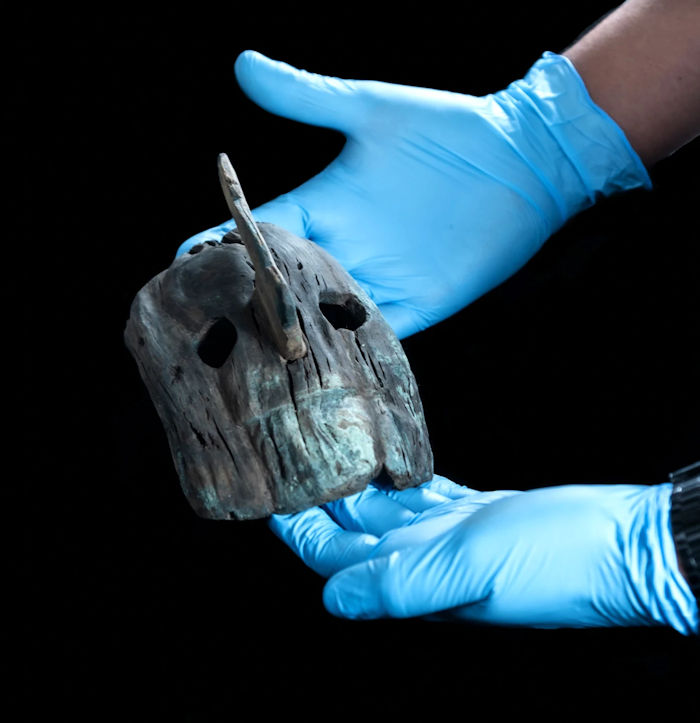 “Currently, the restorers María Barajas Rocha and Adriana Sanromán Peyrón are applying a very innovative conservation technique. Thanks to it, the wood does not melt in our hands. They are extremely delicate objects; when we extract them from the offerings they come out as if they were pork rinds in green sauce.

[That of the Templo Mayor] is a collection, I would dare to say, unique in its kind. It is one of the richest in all of Mesoamerica. First, because of its state of conservation. These types of objects normally do not survive to this day, among other things, because this was an island surrounded by a lake. The conditions caused these objects to survive well over 500 years; another is the collection's richness and diversity. And, on a symbolic level, it is exceptional, because we are in the capital of the Mexica empire. The materials we have here are spectacular because we are in the heart of an empire. That explains, in part, why we have found not only wood, but rubber, flowers, crocodiles, starfish... It is a unique place in the sense that you have three superimposed capitals. Mexico, capital of 21 million inhabitants.

Then the capital of New Spain, the most important European city overseas, with 170,000 inhabitants; Further down, you have Mexico-Tenochtitlan, with about 200,000 inhabitants. We are excavating in a privileged place such as Jerusalem, Istanbul; Alexandria, in Egypt or Rome itself”, INAH’s López Lujan told to the El Pais.

INAH archaeologists report several of the objects were found inside 7 excavation units and 14 offerings from old Tenochtitlan, were made from softwood obtained from different species of pine. The use of white cedar, cypress, ahuehuete, aile and tepozán has also been identified. 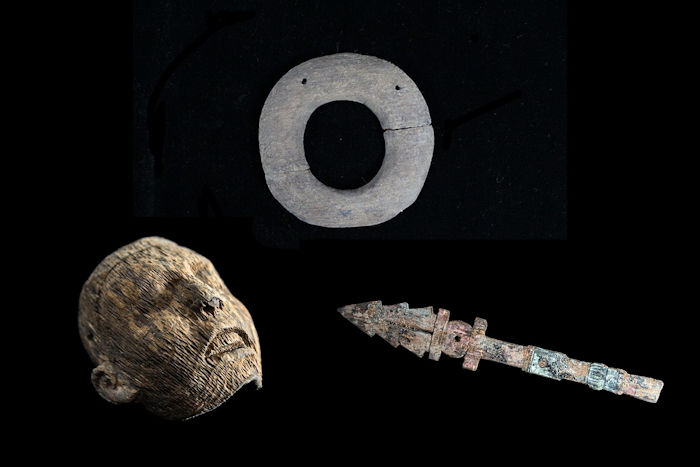 El Pais reports, “the artifacts were found complete or almost complete, and many even preserve traces of polychromy on their surfaces: blue, red, black and white; typical colors used by the Mexica culture. Blue, for example, is associated with the god of rain. Black and white were used to outline figures, for example, to mark closed eyes on masks.

According to Víctor Cortés Meléndez, archaeologist of the Templo Mayor Project, the stories of Fray Bernardino de Sahagún mention that in the Mexica era carpenters and carvers were specialized craftsmen who made use of the existing trees and plants in the Basin of Mexico. “

“Trees in Mesoamerica, especially some species, were considered axis mundi, they were sacred. There were pieces adorned with wood by Mexica priests, for example, copal figurines, basalt braziers and flint knives. To the flint knife they put his earmuffs and his serpentine scepter, one of the attributes of Tlaloc,” the archaeologist told El Pais. 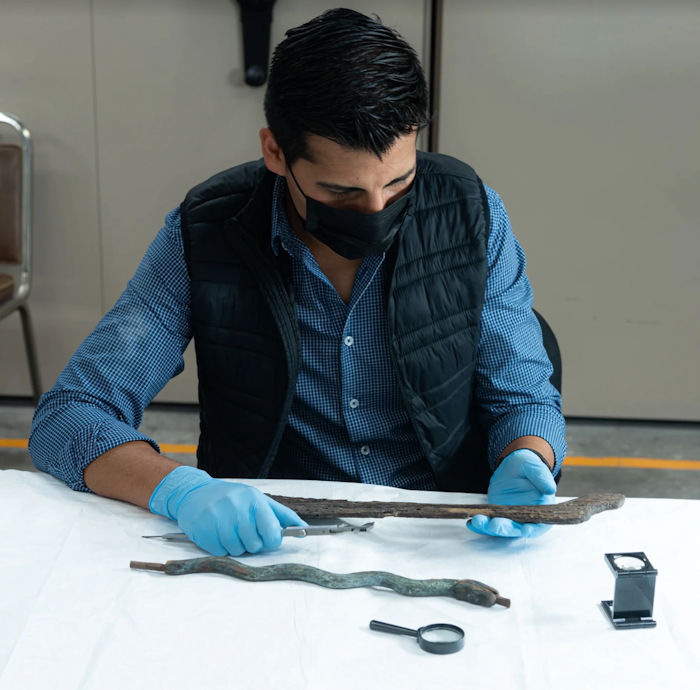 “Most of the wooden pieces are miniature representations of pitchers, deer-shaped or serpentine scepters; miniature and pectoral masks; darts, throwing darts (atlatl) and mallets, with which they adorned the protagonist animals of the offerings of the Great Temple.

Scientists explain the discovery of the monolith of the goddess Tlaltecuhtli, the unique monumental sculpture that represents the earth, on the property that was previously occupied by the Mayorazgo of Nava Chávez , has motivated the team of specialists from the Templo Mayor Project, led by archaeologist Leonardo López Lujánto to excavate at the site. If everything goes well we may soon be able to learn more about the discoveries made at this historical site.