Conny Waters - AncientPages.com - Archaeologists are investigating a mysterious 5000-year-old mass grave in Poland that could shed light on a particularly violent era in European prehistory of which little is known.

Ancient DNA reveals a large family was brutally murdered, but the circumstances surrounding the 5000-year-old gravesite have been a mystery.

The mass grave was unearthed in the southern Polish village of Koszyce. The skeletons of 15 women, children and young men were found -- each slain by powerful blows to the head. Yet, their bodies were neatly positioned alongside one another and with an abundance of gifts for their final voyage. 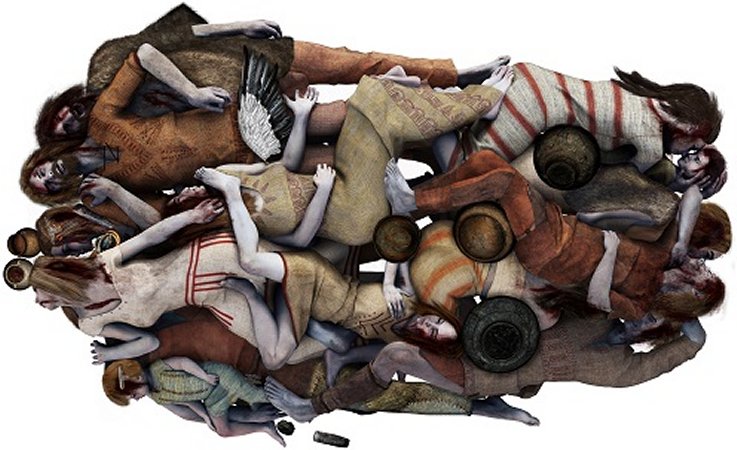 The bodies in the grave were placed neatly side by side and with gifts for their last journey. But all of the corpses bare marks on their skulls, that they were killed brutally. Credit. Reconstruction: Michal Podsiadlo (polish artist).

Using genomic analyses, radiocarbon dating, isotopic analyses and archaeological data, the researchers gained detailed insight into a this Stone Age society and a grizzly occurrence some 5000 years ago.

"By analyzing ancient DNA from the skeletons, we were able to map each of the family relationships. We can see that mothers are laid next to their children and brothers side-by-side. Those who buried the dead knew them well. We also see that most of the fathers from this extended family are absent from the grave. Our suggestion is that they weren't at the settlement when the massacre occurred and that they returned later, and subsequently buried their families in a respectful way," says evolutionary biologist Morten Allentoft of the University of Copenhagen in a press statement.

"We do not know who was responsible for this massacre," according to University of Copenhagen archaeo-geneticist Hannes Schroeder. "But it is thought-provoking that it occurred 5,000 years ago, as the late Neolithic Period was transitioning into the Bronze Age. During this period, European cultures were being heavily transformed by Yamnaya cultures migrating from the east. It is easy to imagine that these changes somehow precipitated violent territorial clashes."

Unusual Medieval Knife Used Like An Eraser Discovered In Poland

In relation to archaeological findings, archaeologist Niels N. Johannsen of Aarhus University adds: "We know from other gravesite discoveries that violent conflicts played out among different cultural groups at this time. However, they have never been as clearly documented as here. All the violence and tragedy aside, our study clearly demonstrates that family unity and care meant a lot for these people, some 5,000 years ago, both in life and in death."