A. Sutherland - AncientPages.com - Although the Aztecs had several creation myths, perhaps the most widely known is the story of the five suns, including the Earth-Sun, the Wind Sun, the Rain Sun, the Water Sun, and the Earthquake Sun.

There are some similarities between Aztecs’ creation myth of the five suns and ancient Greeks myths that describe how each human race created by the gods was less advanced than the previous one. In our article about gods’ creation of five different human races, we talked about how previous ancient races were doomed to be destroyed. 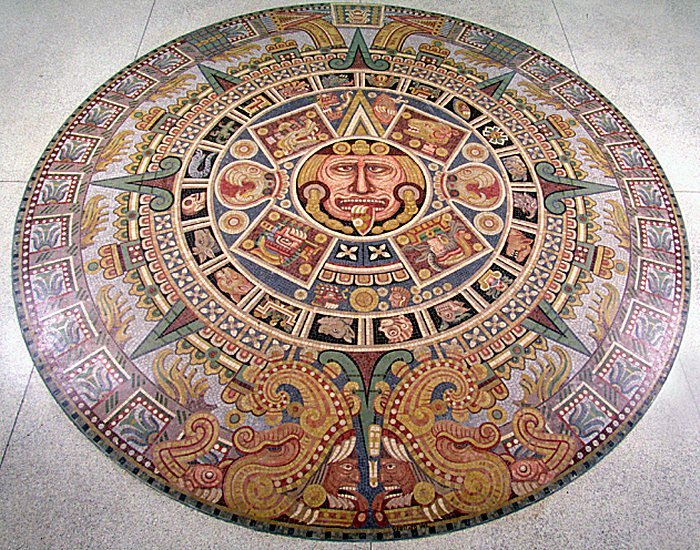 The stone refers to the main elements of the Mexica cosmogony. The 25-ton monolith represents the fifth sun, or age, which began with the accession of King Itzcoatl (1427-1440). The central image depicts Tonatiuh, the Aztec sun god and principal deity during the fifth sun, and the Aztec cycle that relates to time and politics. Four icons - jaguar, wind, rain, and water - represent the four previous suns, or ages, when the world was repeatedly created and destroyed. Twenty signs belong to the 13 cycles in the 260-day Aztec ritual calendar. Two fire serpents encircle the mosaic, their heads face each other at the bottom and tails meet at the top. Image credit: AMNH

Like many other ancient civilizations, the Aztecs saw time as a cyclical process. They were convinced that the world we live in, will eventually be destroyed, just like the previous worlds met their fate on this planet.

Age Of The Fifth Sun

The Earthquake Sun was related to the world in which the Aztecs lived, and we live today. These people considered themselves “the people of the sun’ living in the time of the Earthquake Sun (the Fifth Sun), which means the fifth era of a cycle of creation and destruction.

According to the Aztec worldview, the other suns (or creation attempts) all failed, so it was logical to assume this world would also end due to massive earthquakes.

To nourish the sun by continuous rituals of human sacrifices was apparently the only way to delay the end of the fifth sun. 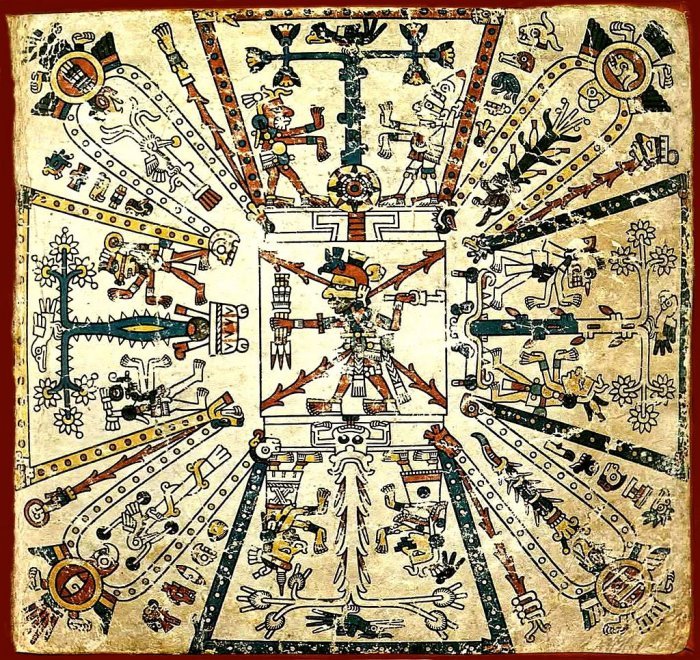 The above image from the Codex Fejervary-Mayer shows four world directions assigned to the offspring of Ometecuhtli. Each of them had an important symbolic meaning. For example, the north symbolized a cold and black region related to death while the east (at the top of the image) represented the region of fertility and life and its sacred color was red. The god Xiuhtecuhtli (or ‘Turquoise Lord’), the Aztec god of fire is depicted in the center of the image.

Four Directions And The Axis Mundi

Mesoamerican cosmology was viewed as the universe composed of five parts – four cardinal directions (east, west, south, and north) and the center.

Additionally, they believed that the five suns were also the five births of the world, and they were the key to the rebirths of the world. The directions were essential to the Aztecs, since Teotihuacan, their great empire, was believed to be located in the center of the universe – Axis Mundi.

God Of Duality And His Self-Creation

It all started with the self-creation of Ometeotl, the primary god of the Aztec pantheon. Due to his controversial and often debated nature, he is often discussed by scholars. Still, many sources accept Ometeotl as a god of duality (both male, Ometecuhtli and female, Omecíhuatl), representing opposing features such as good and evil, male and female, dark and light, order and chaos, fire and water, judgment and forgiveness and motion and stillness.

Ometeotl (Ometecuhtli) was above all the other important deities in the Aztec pantheon. He was not related to any temple or cult and he never interacted with the Aztecs in any way. Still, they were undoubtedly aware of his constant existence in every aspect of religious ritual. 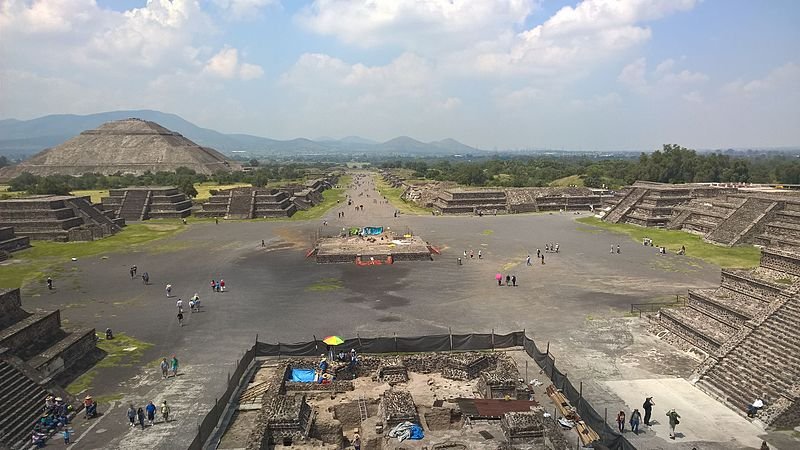 Accompanied by his female counterpart, Omecíhuatl, he was able to take a step closer to the real physical world and create his offspring, represented by the four Tezcatlipocas.

Offspring Of The Creator God Form The Aztec Pantheon

The first was Xipe Totec (the Red Tezcatlipoca), the god of gold, farming, and springtime, associated with the East direction. The second was Huitzilopochtli (the Blue Tezcatlipoca), the god of war and hunting, who became the sun-god responsible for the sun moving across the sky in later beliefs. He was associated with the South. It was believed that without his power, the sun would stand still or fall from the heavens.

The third one in the pantheon was Quetzalcoatl (the White Tezcatlipoca), the god of light, mercy, and wind associated with the West.

Quetzalcoatl was known as Kukulkan ('feathered serpent'), a central figure of the Mayan people in Mexico.

The last deity in the pantheon was the Black Tezcatlipoca (Lord of the Night Sky) or simply known as Tezcatlipoca. He was the god of judgment, night, deceit, sorcery, and the Earth, who presided over the North, a cold region associated with death. This rather creepy individual had power over life and death. 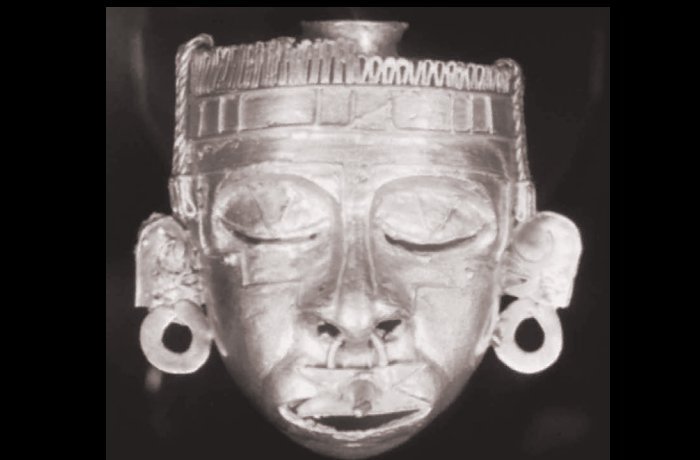 The four gods were additionally accompanied by Tlaloc, the rain and thunder god, and his consort, Chalchiuhtlicue, goddess of water.

All of these deities were involved in a cosmic battle for supremacy. Each of them wanted to be the most important and powerful; their clashes contributed to the creation and destruction of the sun eras.

The first world (‘Four-Jaguar’) lasted 676 years and was inhabited by giants. Its ruler Tezcatlipoca was in conflict with Quetzalcoatl, which had devastating consequences for the earth. Jaguars devoured the earth.

Quetzalcoatl won this battle and presided over the second world (Four-Wind), but this sun era that also lasted 676 years) ended when hurricanes destroyed the earth.

The third world (Four-Rain) was ruled by the rain god Tlaloc, but Quetzalcoatl sent a fiery rain that consumed this world. One version of the myth says that only birds survived.

Then followed the fourth world (‘Four-Water’), which lasted 676 years and was ruled by the goddess Chalchiuthlicue, wife and sister of the god Tlaloc. This world also ended in yet another cataclysm. It was flooded, and its inhabitants turned into fish.

Now we live in the ‘fifth sun.’ According to the Aztec beliefs, this world is known as Earthquake Sun and will be destroyed by one gigantic earthquake or multiple earthquakes.

The belief in a returning savior is encountered worldwide, though he is known under different names.

León-Portilla M. Aztec Thought and Culture: A Study of the Ancient Nahuatl Mind

Ryan, Duncan. The Aztec: The Last Great Civilization of Mesoamerica