A. Sutherland - AncientPages.com - Teotihuacán is an ancient site where the circumstances of its destruction are not entirely clear. The people who created it are completely unknown, and no satisfactory explanation has ever been found for what appears to have been the sudden decline of the city.

There is no good reason to suggest a foreign invasion. The city was destroyed through burning and deliberate destruction, and it must have been sacked. It happened in the middle of the 6th century CE.

Mysterious, massive Teotihuacán - which is one of the intriguing archaeological sites in the Americas - remains a historical mystery.

Situated in the Valley of Mexico, 40 km (25 miles) north of Mexico City, on the central highland plateau of Mexico, Teotihuacán was first inhabited from about 150 BC, but the first ceremonial buildings were constructed in the 1st and 2nd centuries AD. It is believed that Teotihuacán, most probably the largest city in the new World, had about 150,000 – 200,000 inhabitants at its height.

Many archaeologists are divided regarding the dating of the site, some believing the city flourished from 1500 to 1000 BC; others suggest a later period of 100 BC to 700 AD but there are also scholars who believe that Teotihuacan is much older.

Small massive stone sculpture found at Teotihuacán; hundreds of painted murals depicting warriors found at the site coincide with the decline and then destruction of the city

It had many pyramids and other large public areas and the city was laid out at this time on a regular grid, never before seen in the New World.

Archaeological findings do not give clear answers regarding the enigmatic people of Teotihuacán, who built and ruled it.

No written records have ever been found that could shed light on Teotihuacán’s past.

It is unknown what the original name of the city was; the name Teotihuacan ‘the place of the gods’ or "place where gods were born", was given by the Nahuatl-speaking Aztecs several centuries after the fall of the city around 550 AD. 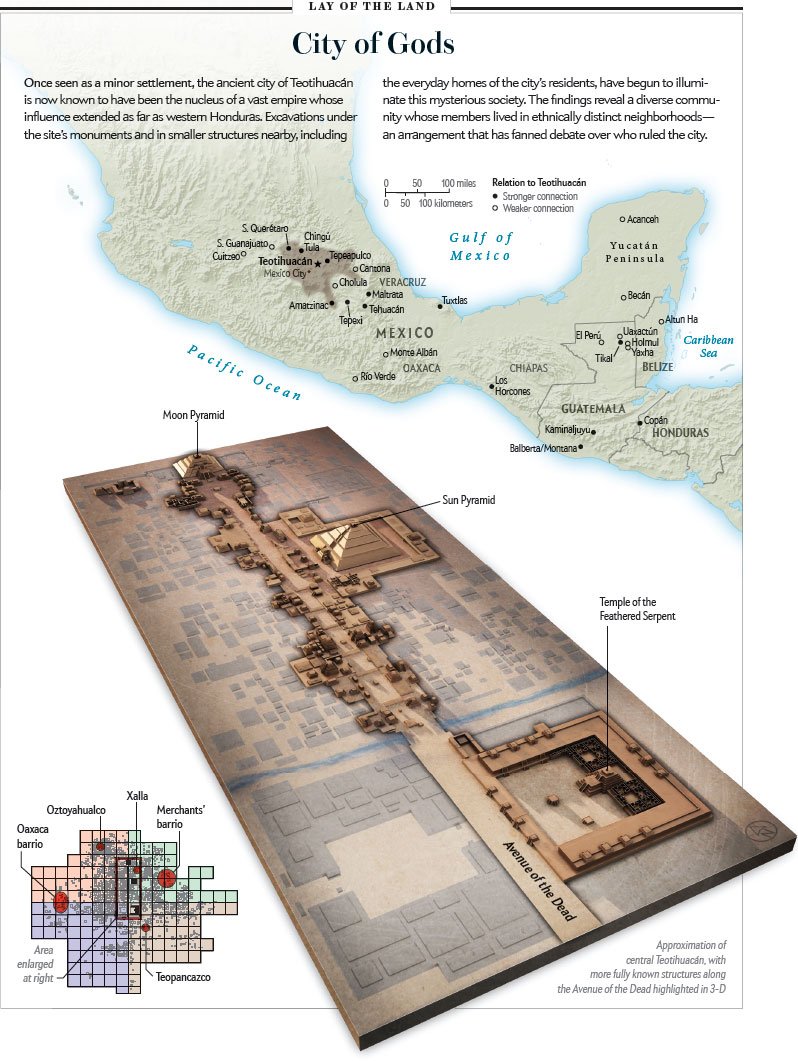 Credit: Maps by XNR Productions, Illustrations by José Miguel Mayo; sources: based on work by Rene Millon (all maps). Image via Nature.com/Scientific American

This name could be associated with Nahua creation myths linked to Teotihuacán. The Aztecs believed that the gods created the universe, with the sun and the moon at Teotihuacán and the city’s motifs and symbols were adopted by the Aztecs as their own. Most recognized of the Mesoamerican deities was Quetzalcoatl, the Feathered Serpent and in the Aztec pantheon, Quetzalcoatl was the primary sky god, associated with wind and air but first of all a god of creation and wisdom.

Myths of Central America tell that the world had undergone four cycles or "suns"; they lived in the fifth sun, which was already old, so the end of the world by earthquakes, was expected at any moment.

In an attempt to delay the cataclysmic event, thousands of people were sacrificed;
in the Pyramid of the Sun, the corner of each step was found full of skeletons of children and
three burial pits with skeletons were discovered by archaeologists beneath the Temple of Quetzalcoatl.

Most impressive depictions of the plumed serpent existed at Teotihuacan four-hundreds years before Palenque, and almost 1000 years before they were seen at Tula or Chichen Itza.

The Pyramid of the Moon. Teotihuacán was an important place of pilgrimage, and hundreds of temples and altars have been identified. The ceremonial complex located at the center of the city consisted of more than 100 shrines and gigantic pyramids all grouped around the central north-south roadway known as the Avenue of the Dead.

Did the mysterious visitor make his first appearance at Teotihuacan? Was the worship of this powerful god taken into the Maya region early in the Christian era by Teotihuacan missionaries anxious to spread their beliefs, or was it brought back from Mayan traditions?, asks T. J. O'Brien, in his book ‘Fair Gods and Feathered Serpents: A Search for Ancient America's Bearded White God’.

Teotihuacán has been mapped by Rene Millon with the help of photogrammetry, in a project lasting many years.

René Millon, a professor emeritus of anthropology at Rochester, dedicated to mapping and excavating a historic pre-Columbian site in Mexico, led an international team of researchers who produced the first complete building-by-building map of Teotihuacán, a 2,000-year-old city that lies 30 miles northeast of Mexico City.

The city’s pyramids are gigantic; the Pyramid of the Sun is the largest building at Teotihuacan. Its base measures 738 feet long and stands 246 feet tall. A temple once stood upon the pyramid’s top but was removed. The powerful city directly controlled a large area of central Mexico and had influence over an even greater area nit the lack of written records makes the hierarchical structure of Teotihuacán unknown.

The rulers probably lived in palaces within the Citadel (Ciudadela): The Citadel was a large complex that constituted the religious, political, administrative, and military center of the city. Within the rest of the city, archaeologists identified hundreds of workshops of which many produced pottery and objects of obsidian. Not all lived comfortably in the city; there have been found many slum dwellings and hundreds of painted murals but only very few stone carvings.

At about 750 AD Teotihuacán was destroyed, burned, and sacked. It was never rebuilt; however, some of the ruins were still inhabited by some illegal settlers.

The Aztecs gradually strengthen their power in the region and the mysterious city of Teotihuacán remained an important place of pilgrimage until the downfall of the Aztecs in 1521.