AncientPages.com - Two months ago, a "huge void," at least 30 meters long, within the Pyramid of Cheops was discovered according to the results of the Scan Pyramids project, led by Mehdi Tayoubi (Hip Institute, Paris) and Kunihiro Morishima (University of Nagoya, Japan).

Now researchers have a theory that can explain their discovery. 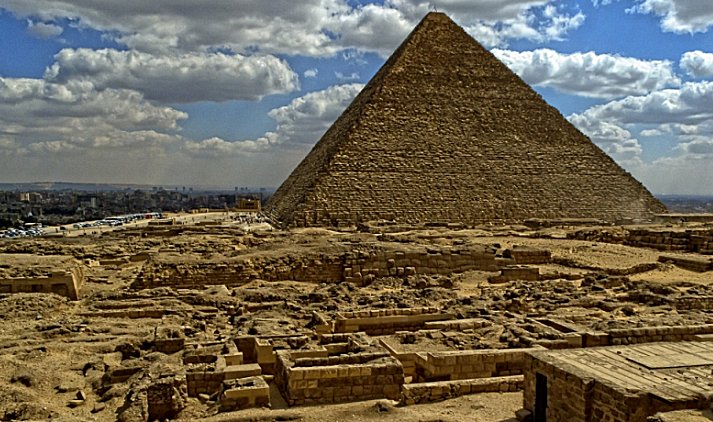 "There is a possible interpretation, which is in good agreement with what we know about the Egyptian funerary religion as witnessed in the Pyramids Texts. In these texts, it is said that the pharaoh, before reaching the stars of the north, will have to pass the,'gates of the sky' and sit on his 'throne of iron,” according to researchers.

"Cheop's Pyramid, built around 2550 BC, is one of the largest and most complex monuments in the history of architecture.

Its internal rooms are accessible through narrow tunnels, one of which, before arriving at the funerary chamber, widens and rises suddenly, forming the so-called Great Gallery. 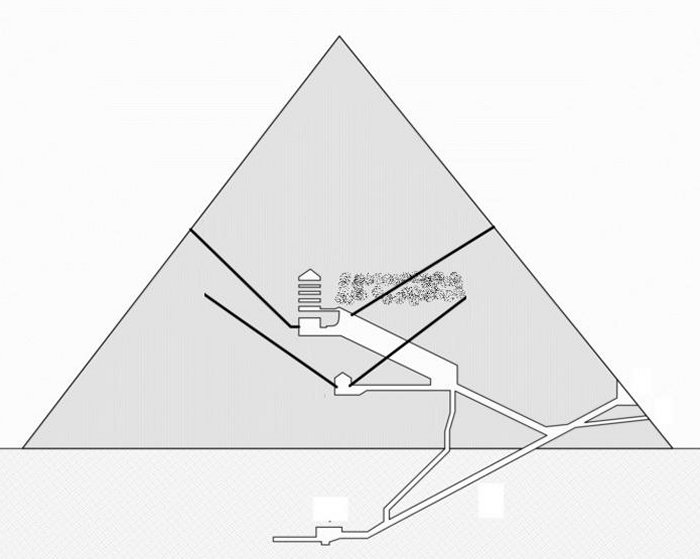 North-south section of the Great Pyramid showing (dust-filled area) the hypothetical project of the chamber, in connection with the lower southern shaft. The upper southern shaft does not intersects the chamber (as instead suggested by the section) because, when viewed in plan, it is displaced to the west with respect to the Great Gallery. CREDIT Giulio Magli

The newly discovered room is over this gallery, but does not have a practical function of relieving weight from it, because the roof of the gallery itself was already built with a corbelled technique for this very reason, " according to Giulio Magli, director of the Department of Mathematics and Professor of Archaeoastronomy at the Politecnico di Milano.

Within the Pyramid there are four narrow shafts directed to the stars. The pharaoh's afterlife was, according to the texts, in the sky, and in particular, among the stars of the north, like the Big Dipper and Draco. Two of the four channels open onto the facades of the monument, while the other two run into small doors. The south door has been explored several times without results, while the north one is still sealed.

The researchers believe the doors are possibly representative of the "gates of the sky," and the north one could well open into the newly discovered room.

The room may contain, at its upper end and exactly under the apex of the great pyramid, an object needed by Cheops after crossing the doors—the "iron throne" mentioned in the pyramid texts.

We can get an idea of this object's nature by looking at the throne of Cheops' mother, Queen Hetepheres, which has been found in pieces and reconstructed by Harvard University. It is a low chair of cedar wood covered with sheets of gold and faience. Cheops' could be similar, but coated with thin iron sheets.

Of course, it would not be melted iron, but meteoritic iron, that is, fallen from the sky in the form of iron meteorites (distinguishable due to the high percentage of nickel) and again cited in the texts. It is certain that the Egyptians knew this material since many centuries before Cheops, and continued to use it for special items designed for the Pharaohs—just think of the famous Tutankhamun dagger.

A way to check or discard this hypothesis would be a new exploration of the north shaft. At present, it is difficult to say with certainty that the northern channel leads into the newly discovered room, because the available images are approximate. The Scan Pyramid project used a non-invasive technique based on the measurement of muons, elementary particles that are generated in cosmic rays and are absorbed differently depending on the materials they go through.

The result is similar to a radiography which must be interpreted.