The oldest Egyptian leather manuscript has been found in the shelves of the Egyptian museum in Cairo, where it was stored and forgotten for more than 70 years.

Dating from the late Old Kingdom to the early Middle Kingdom (2300-2000 B.C.), the roll measures about 2.5 meters (8.2 feet) and is filled with texts and colorful drawings of the finest quality.

“Taking into account that it was written on both sides, we have more than 5 meters (16.4 feet) of texts and drawings, making this the longest leather roll from ancient Egypt,” Wael Sherbiny, the Belgium-based independent scholar who made the finding, told Discovery News.

The first Egyptian to obtain his PhD in Egyptology in 2008 from the Leuven University in Belgium, Sherbiny specializes in the ancient Egyptian religious texts and is preparing the full publication of the unique leather roll. 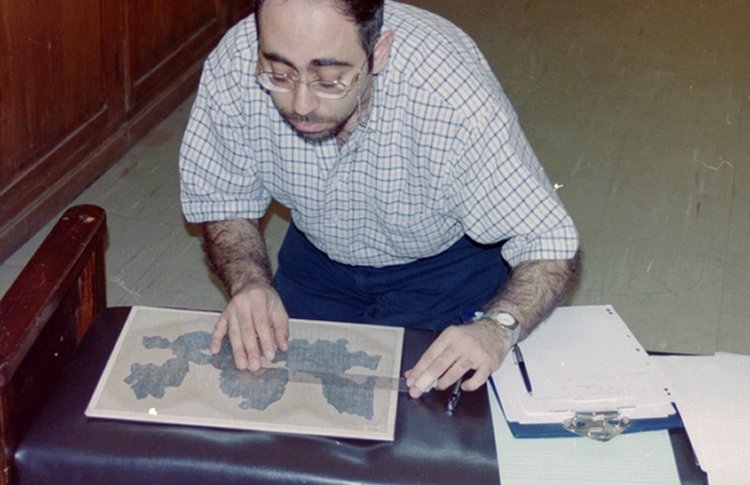 Dating from the late Old Kingdom to the early Middle Kingdom (2300-2000 B.C.), the roll measures about 2.5 meters(8.2 feet) and is filled with texts and colorful drawings of the finest quality. Photo credits: Discovery News

He announced the finding at the recent International Congress of Egyptologists in Florence.

Nothing is known about the manuscript’s origins. The French Institute of Oriental Archaeology in Cairo bought it from a local antiquities dealer sometime after the WWI. Later it was donated to the Cairo Museum, where it was unrolled shortly before the outbreak of the WWII.

“Since then it was stored in the museum and fell completely into oblivion,” Sherbiny said.

Basically a portable religious manuscript, the more than 4,000-year-old roll, contains depictions of divine and supernatural beings which predate the famous drawings found in the Book of the Dead manuscripts and the so-called Netherworld Books from the New Kingdom onwards (1550 B.C. onwards).

“They were likely recited by a priest,” Sherbiny said.

It is known that priests used to carry leather rolls to reference while reciting sacred texts during religious rituals.

Only six other portable manuscripts have survived from ancient Egypt and could possibly share a close date with the Cairo leather roll. All of them are papyri.

“Leather was considered a very precious writing material in ancient Egypt. It was the principal writing medium to record holy texts and great historic events as it was more practical than papyrus due to its flexibility and durability,” Sherbiny said.

Such prestigious leather rolls, kept in the libraries and archives of temples, were also used as master copies from which cheaper copies were reproduced on papyrus. While papyri were preserved by Egypt’s dry climate, leather objects quickly perished.

The Cairo roll was no exception: part of it was fragmented into very tiny pieces. Like in a jigsaw puzzle, Sherbiny pieced them all together.

The pieces formed a large pictorial-textual segment from the so-called Book of Two Ways, which is an illustrated composition containing temple rituals later adapted for the funerary use.

This composition is known to Egyptologists as it occurs on the floorboard of Middle Kingdom coffins (2055-1650 B.C.) from the necropolis of Hermopolis in Upper Egypt.

“Amazingly, the roll offers an even more detailed iconography than the Hermopolitan coffins in terms of texts and drawings,” Sherbiny said.

According to the scholar, the roll shows that parts of this composition were already known before their appearance on the Hermopolis coffins.

“It suggests that several segments of the composition were probably not the creation of Hermopolitan theologians, but had rather longer history of transmission before they were chosen to be used as coffin decorations,” Sherbiny said.

He noted the leather roll also features religious drawings which had not been seen in coffins nor in any other monument until now.

“It shows that there was a large body of both religious iconography and texts, but unfortunately they did not reach us,” Sherbiny concluded.