Conny Waters - AncientPages.com - Archaeologists have discovered the elusive remains of what appears to be London's oldest theater known as Red Lion. The playhouse is thought to have been built around 1567.

The Red Lion playhouse is widely regarded as the earliest known purpose-built playhouse of the Elizabethan period. It was set up by John Brayne, who later went on to construct The Theatre, Shoreditch in 1576 with James Burbage, his brother-in-law and member of acting company The Lord Chamberlain's Men. The Theatre was the first permanent home for acting troupes, and a venue that staged a young Shakespeare's plays in the 1590s. 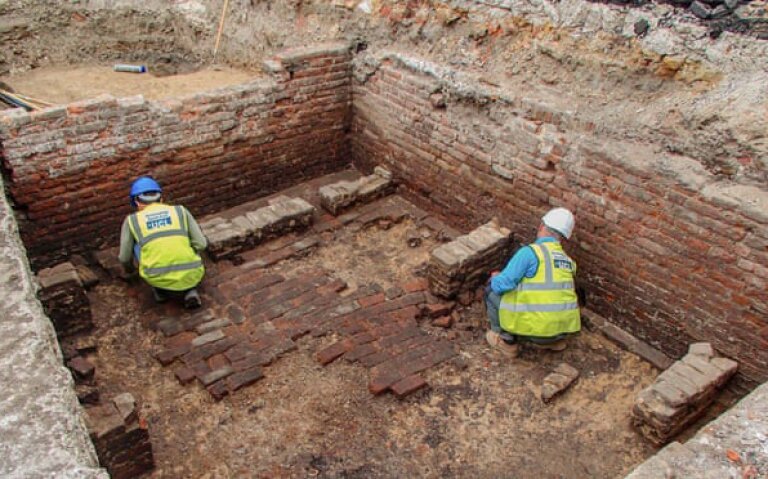 The only information known about the Red Lion playhouse is from two lawsuits of 1567 and 1569 between the proprietor, John Brayne, and the carpenters responsible for elements of the playhouse's construction. The 1567 lawsuit describes timber scaffolds being located at "the house called the red lyon" and the 1569 lawsuit mentions a "farme house called and knowen by the name of the Sygne of the Redd Lyon" as being a site of an outdoor stage and seating.

The first lawsuit details 'scaffolds' or galleries around the stage, suggesting they were substantial. The second lawsuit relates to the quality of work, and crucially includes description of the stage and dimensions: 40ft (12.2m) north to south, by 30ft (9.1m) east to west, and standing at a height of 5ft (1.5m) above the ground.

In January 2019, the archaeological excavations in Whitechapel started to uncover an unusual rectangular timber structure, comprising 144 surviving timbers and measuring 12.27m north-south by 9.27m east-west. At these dimensions, the structure closely matches those detailed for the stage mentioned in the lawsuits. Postholes around the timber structure appear to correspond with the "scaffolds", or galleried seating.

In the north-east corner of site, fronting what was once Mile End Green, excavations revealed 15th/16th century buildings that later became a sprawling complex during the 17th century. These buildings may represent the Red Lion inn itself, evolving over centuries from a medieval farmstead. Farmsteads of this period were known to serve beer, and this one was established enough to have a prototype playhouse built on its land by the late 16th century. It eventually became a more formal inn that continued at least into the 18th century.

Of the buildings uncovered, two are probable cellars, identified as beer cellars by UCL Archaeology South-East's historic buildings specialist Dr. Michael Shapland. He said, "Tudor period inns needed somewhere cool and secure to store their drink, as beer would have gone off much more rapidly than it does today."

The artefacts recovered further support the possibility that the Red Lion inn has been found. Glass and pottery assemblages include numerous beakers and drinking glasses, ceramic cups, two-handled drinking mugs, bottles, and tankards. One complete late-17th century tavern mug has a royalist medallion of Charles II, and other tankards feature tavern or landlord names. These finds are on a commercial scale indicating the consumption of hot drinks and alcohol that continued into at least the 18th century. 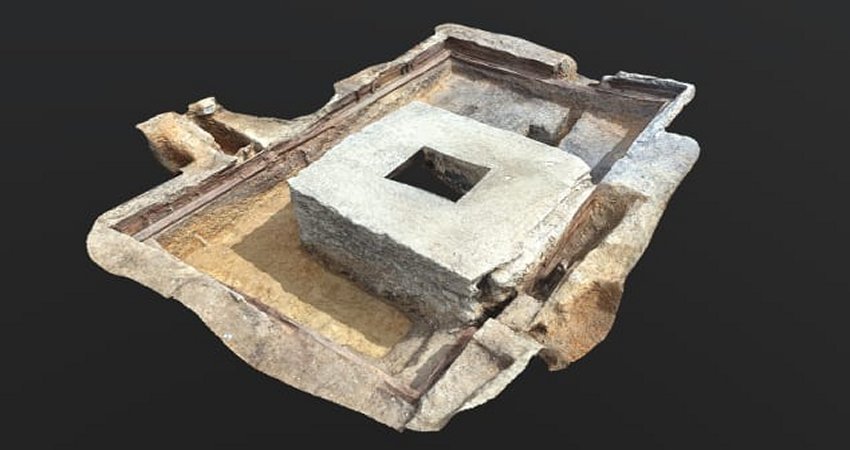 This 3D model shows how the stage would have looked. Archaeology South-East/UCL

Stephen White, who directed the excavation for UCL Archaeology South-East, said, "This is one of the most extraordinary sites I've worked on. After nearly five hundred years, the remains of the Red Lion playhouse, which marked the dawn of Elizabethan theatre, may have finally been found.

"The strength of the combined evidence—archaeological remains of buildings, in the right location, of the right period, seem to match up with characteristics of the playhouse recorded in early documents. It is a privilege to be able to add to our understanding of this exciting period of history."