A. Sutherland - AncientPages.com - King Sargon of Babylon, who ruled about 3800 B.C. established a regular postal service for his official letters which could reach recipients even in the most distant locations.

Herodotus wrote that "neither rain, nor snow, nor heat, nor gloom of night stays the couriers from the swift completion of their appointed rounds." 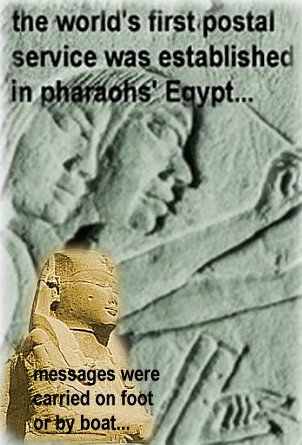 The Old Testament contains many references to the post. Ancient people of Persia had "airmail" with homing pigeons and the Aztecs and Inca had fast runners who delivered messages with express speed.

What was the most important for all these ancient cultures and their letter delivery? Whatever method they used to get their messages delivered, they had one, primary and common goal: to get the mail on time.

The struggle to get the mail on time has lasted more than 5,000 years.

Pharaohs of ancient Egypt founded the first postal system and regarded the post so important that their ancient postmen are depicted on the walls of royal tombs. When the power of pharaohs grew, the need of information increased as well.

The two kingdoms of Upper and Lower Egypt were united c. 3000 BC, and secure exchange of information was necessary to keep two kingdoms loyal to one another, especially in times of trouble.

Trustworthy messengers were sought and pharaoh established a team of couriers who memorized information in order to deliver it verbally rather to the Kingdom's officials than risk enemy capture of written documents.

Neither the pharaoh nor his officials could remember all the information regarding army equipment or foregone tax revenues.

An archive was a solution when the bureaucracy began to grow significantly and the need of storing of written documents emerged.

The system of ancient hieroglyphics developed by Egyptian civilization played an important role when the world's first postal service was established as well as the invention of papyrus sheets rolled up into scrolls gave enough place for large amounts of information. The Egyptian kingdom became complex and the need of secure and fast communication was urgent.

In this way, the first postal system was established. The records say it took place around 2200 BC. The pharaoh's couriers were able to deliver papyrus scrolls with orders and laws to all the kingdom's provinces and to the pharaoh's officials were delivered financial status reports and other documents of¨of significant value for the kingdom. 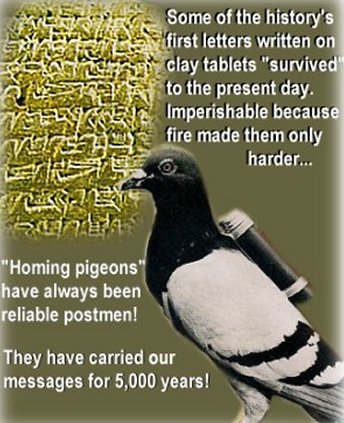 The Egyptian mail delivery system had also another important purpose: it linked the government with military outposts throughout Egypt.

Most Egyptian mail couriers carried their messages on foot or by boat. Some of the history's first letters written on clay tablets survived to the present day.  They were imperishable because fire made them only harder and they originate from Persia.

Around 450 BC, Herodotus described a well-functioning postal service in Persia that was based on relays of horses stationed at one-day intervals at stations manned by officials who would receive a letter and send it off with fresh riders on fresh horses.

Messages between the monarchy and officials in very remote parts of the country were picked up and delivered as soon as possible!

Along the main, 55 mil-long road, so called King's Road, there were many low-post centers where a rested horse and a new messenger were waiting to take over all issues and deliver them as quickly as possible.
Early "letters" were carved on dried clay tablets (the Persians had no paper), with dense rows of cuneiform writing.

Letters and other messages have existed from the time of ancient India, Sumer, ancient Egypt through Rome, Greece and China, up to the present day. This form of communication co-existed along with humans.

Letters make up several of the books of the Bible and large archives of personal, diplomatic, or business correspondence serve as primary source of knowledge about the ancients.

One thing, however, we have to remember! Prehistoric mail delivery was not similar to that we know today. During ancient times, only government and military officials could use the postal system.

Left: Roman Empire  had the well documented and perfectly functioning postal service which was formed under Augustus Caesar. It was called Cursus publicus;  Right: Mail courier in Persia

Everyone else had to hire their own messengers to deliver a letter to another person or use one of the most reliable postmen in the world - "homing pigeon". They have carried our messages for 5,000 years, which is confirmed in many ancient records of this planet. The Persians, for example, were one of those who systematically used "homing pigeons" to send their messages.

And surprisingly, in 1860, Reuter's news agency had as many as 45 (!) "homing pigeons" which delivered news between Brussels and Berlin. Lack of the telegraph lines, forced the agency to do it and it worked!

The Roman Empire built the most advanced postal delivery system; riders could cover about 170 miles (270 kilometers) in a 24-hour period. Fast and reliable communication between Rome and governors and military officials in distant provinces was a necessity.

Approximately 2000 relay stations located with intervals, were located along most important roads of the empire. The stations were equipped with horses, spare parts and a man who took care of the animals and provided the couriers with food and drink. Additionally, one could hire mules and ox-carts for larger packages.

Worth mentioning is that the speed with which government dispatches and other mail could be carried about the Roman Empire, was not equaled again in Europe until the 19th century.
At the same time, the so called "cursus publicus" (state-run courier and transportation service) of the Roman Empire was operational and delivered mail to ordinary people.

Part 2 of the article - here