Ellen Lloyd - AncientPages.com - The story of Alwilda sounds more like a fairytale and truth to be told it’s difficult to determine whether the account is based on historical events or is just a beautiful and romantic legend.

Alwilda was said to be the daughter of Synardus, a 5th century Scandinavian king. According to some sources Synardus was king of Gotland, Sweden.

Her father was overprotective and decided to lock his young and beautiful daughter in a tower. This was done to keep young men away from her. To make it extremely difficult to get near Alwilda, her father ordered to put dangerous snakes around the building. Admirers had to climb the tower and defeat the poisonous snakes that guarded her, but no-one, except Prince of Denmark succeeded. 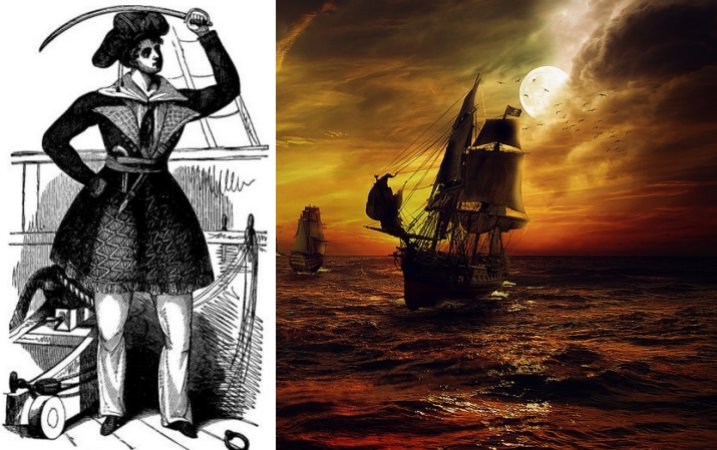 However, Alwilda didn’t like the idea of marrying an unknown prince.

When Prince Alf entered her room, he discovered Alwilda was gone. Apparently, her mother had helped her to escape. To avoid her impending marriage, Alwilda fled and joined her female friends. These young women dressed like men and were sailors. Together, Alwilda and her female pirates commandeered a ship. One day during their journeys they came across a ship that had lost its captain. Because of her skills, the pirates unanimously elected Alwilda as their captain. Dressed as a man, Alwilda became a successful and feared pirate, but it seems she could not escape her fate.

News about her piracy reached and the King of Denmark who sent his son and a navy ship to battle with the troublesome pirates.

As Charles Ellms writes in The Pirates Own Book, “by this reinforcement she became so formidable, that Prince Alf was dispatched to engage her. She sustained his attacks with great courage and talent; but during a severe action in the gulf of Finland, Alf boarded her vessel, and having killed the greatest part of her crew, seized the captain, namely herself; whom nevertheless he knew not, because she had a casque which covered her visage.

The prince was agreeably surprised, on removing the helmet, to recognize his beloved Alwilda; and it seems that his valor had now recommended him to the fair princess, for he persuaded her to accept his hand, married her on board, and then led her to partake of his wealth, and share his throne.” 1

On Viking Expeditions of Highborn Maids: Two female warriors, of royal family according to the crowns on their heads, are participating in a sea battle. From Olaus Magnus' A Description of the Northern Peoples from 1555. Credit: Public Domain

Other versions of the story inform  that after Alwilda revealed her identity, she and the prince married on the deck of the ship. Later they went to the shore and reigned as king and queen of Denmark.

Whether Alwilda was a real historical person is difficult to determine due to the lack of credible ancient accounts. Most historians consider the story of Alwilda a legend. Maybe there was once a Scandinavian princess who escaped from a tower and became a fierce pirate. After all, historians know today that there were female Viking warriors.

In Norse mythology, there are many stories about female warriors called shield-maidens.

Historians have debated for years whether these powerful women did really exist and it seems now we have the answer to this question. Archaeologists have found evidence that shows female fighters might have its roots in actual historical events.

it can be added that Alwilda's story seems to have been known in other European countries. Torquato Tasso, for example, an Italian poet of the 16th century wrote a play named Il Re Torrismondo. 2 In this tragedy the story of Alwilda is slightly different. She must marry Germondo, the king of Sweden, bust she falls in love Torrismondo. Not feeling she has any options, Alwilda commits suicide in order not to choose between love and honor.

1. Charles Ellms - The Pirates Own Book