A. Sutherland  - AncientPages.com - “Dragonships” - largest longships of the Vikings - were a symbol of the Viking’s times.

They were decorated with beautiful carved heads of dragons and other magical beings mounted on their stems. 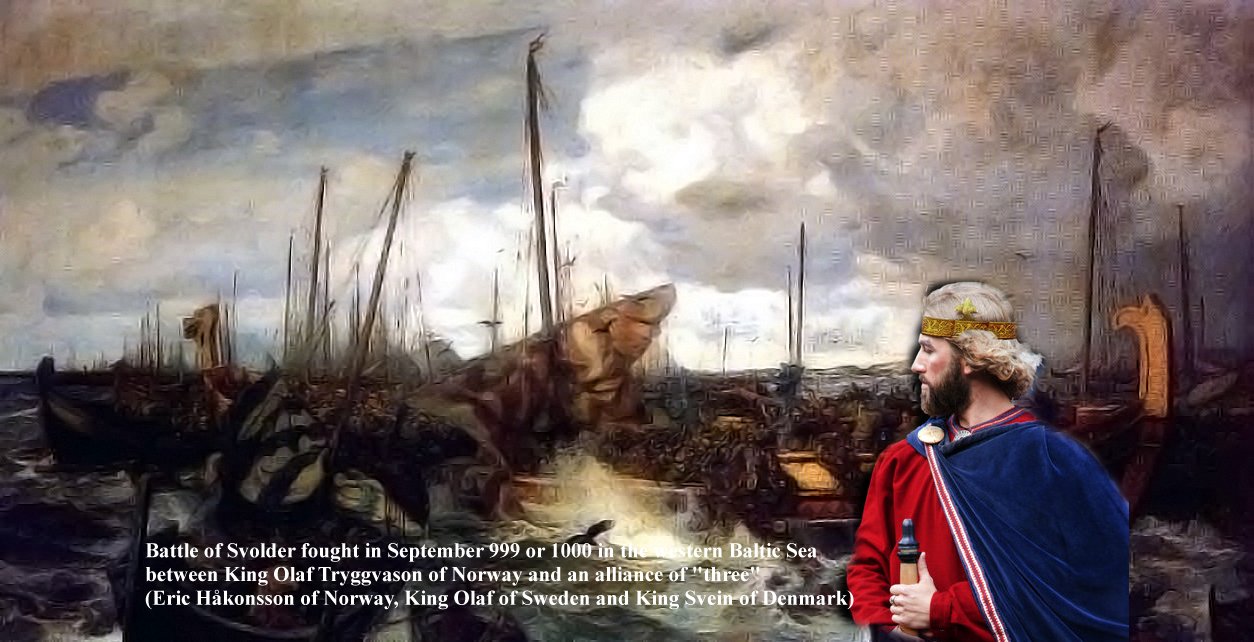 These strong and solid ships were built for chieftains and kings and most probably they were first developed in Northern Norway.

The Long Serpent  (“Ormen Lange”) was the most legendary warship and the pride of the Norwegian king Olav Tryggvason (995-1000). It was built on special orders of Tryggvason who had captured a similar but smaller dragonship. This one had to be far larger and more carefully put together.

Thorberg Skafhog was the master builder of the ship and he had many hard-working men who fell wood and shaped it, while others made nails and carried timber.

Snorri Sturluson wrote in “Heimskringla” that it was exceptionally long, built on the model Drakkar, and its stem and stern were gilded. The ship was long, broad, high-sided and strongly timbered.

"The ship was a dragon...but this ship was far larger, and more carefully put together in all her parts…. The length of the keel that rested upon the grass was seventy-four ells…The Long Serpent had thirty-four benches for rowers. The head and the arched tail were both gilt, and the bulwarks were as high as in sea-going ships. This ship was the best and most costly ship ever made in Norway..." 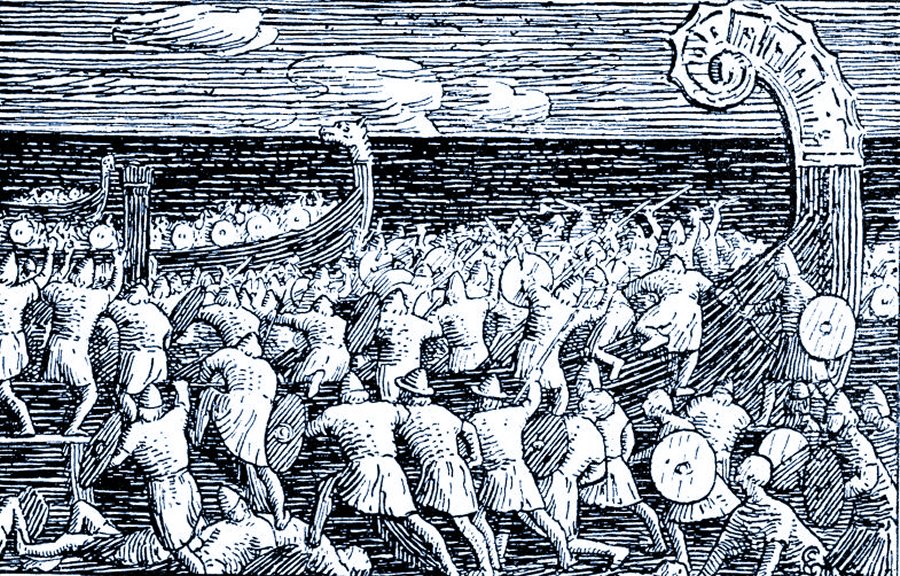 Saga of Olaf Tryggvason “Eiriks men board the Long Serpent in the battle of Svolder.”  Ill. Halfdan Egedius

The Long Serpent was equipped with 34 sections for rovers, 68 half-sections and 68 oars. “In every half-section were eight men, and each and all chosen men; and in the fore-hold were thirty men… and the ship had a crew of 574 men.”

It is believed the “Long Serpent” was approximately 48m long or even longer.

In the year 1000 AD the “Long Serpent” and King Olav Tryggvason participated in the famous sea battle at Svolder, (today probably Rügen in Germany.) 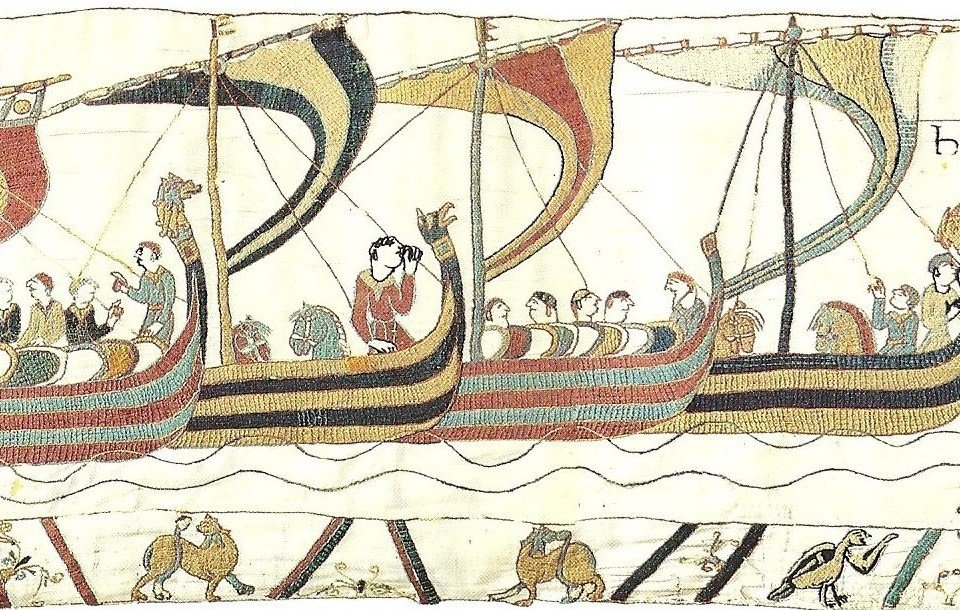 Viking longships on the Bayeux Tapestry

His fleet faced a coalition of three powerful rulers, Eric (Håkonsson) Haakonsson (960s – 1020s), Governor of Norway and Earl of Northumbria, King Olaf of Sweden (ca.980 – 1022) and King Svein of Denmark (960 – 1014) who together combined their forces, which means they had 71 ships against Tryggvason’s 11 warships.

They ambushed Tryggvason and his ships were boarded and captured. The fiercest fighting took place on the “long Serpent”, the last ship to be captured by enemies.

“…The deck was wet with blood. More and more of Eirik’s men climbed aboard and closed in the stern, hacking with broadaxes and swords. When Olav and his remaining men saw that the battle was lost, they leaped into the sea with their armor, shields and weapons.

The enemy tried to seize the King before he sank. But he pulled his shield over his head and vanished  beneath the waters..." wrote Robert Wernick in his book “The Vikings”. 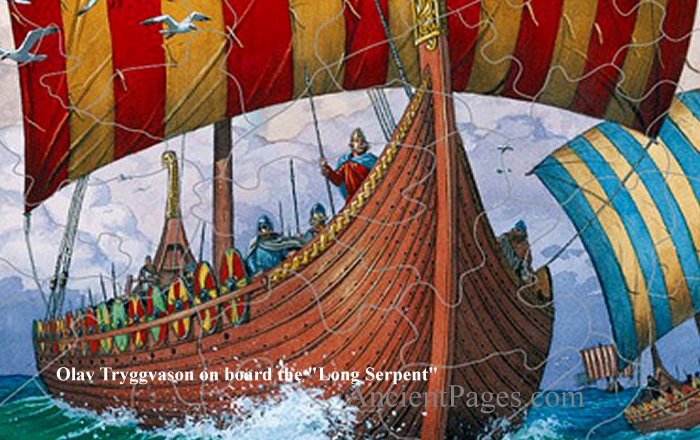 The magnificent “Long Serpent” became Eirik’s booty along with a share of Norway.

Two hundred years later, in the 13th century, when Snorri Sturluson recorded “King Olaf’s saga”, the “Long Serpent’s” oaken bones were still visible beside Trondheim Fjord, a reminder of the greatness of the Viking mariner and the boldness of the Viking warrior….”

The “Long Serpent” was neither the fastest nor the best rowing ship in Tryggvason’s fleet and still there was something special about it.

The ship became legendary for its size and extraordinary qualities already when it was in use and later in the sagas about Olav Tryggvason.

It is still remembered today.