A. Sutherland - AncientPages.com - Aztec warriors had a large variety of offensive and defensive weapons.

The Aztecs were cruel, but nearly perfect warriors, who used weapons, designed to not only kill but to incapacitate, stun or immobilize the enemy.

The Aztec Eagle Warriors possessed a large arsenal of effective weapons and successfully dominated both Southern Mexico and Central America until they finally had to face a stronger enemy – the Spaniards.

Among most popular weapon were:

It was the Aztec sword which consisted of the 70-80 cm long and 6 to 8 small, prismatic and sharp obsidian blades. Obsidian was always used by the Aztecs; it was harder than steel and platinum and much stronger in compression, but rather fragile, which made them useless as a sword.

This weapon could cause serious wounds or even kill, when it struck on the skull of an enemy; it could cut through flesh, muscle, and through the skull’s bone reach the brain and destroy it, but under the condition that all the obsidian (rather fragile) blades were properly embedded into the sides of the sword. From the monumental sacrifices the Aztecs perform it is clear that the Eagle Warriors are extremely efficient in this form of combat.

This weapon was supposed to represent the Aztec God Tezcatlipoca.

Tepoztopilli - was the Aztec version of the basic spear, considered as deadly as any other weapon in the hands of an Eagle Warrior.

It was wooden spear with the shaft about 6 to 8 feet in length, with a broad head edged with sharp obsidian blades. This weapon serves two distinct advantages on the battle field. It is a defense due to its length and ability to keep the Eagle Warrior at a safe distance from their opponent.

Tlaximaltepoztli - an axe-like weapon similar to a tomahawk, with the head of which was made out of either stone, copper or bronze and had a two side design, one side had a sharp bladed edge while the other one a blunt protrusion. This weapon was meant to represent the Aztec God Tepoztecatl.

Another weapon that the Aztec warriors widely used was the Atlatl , a long range weapon that resembles a short stick shaped with a slight curve fitted with a spur at one end that fits in the base of the dart. 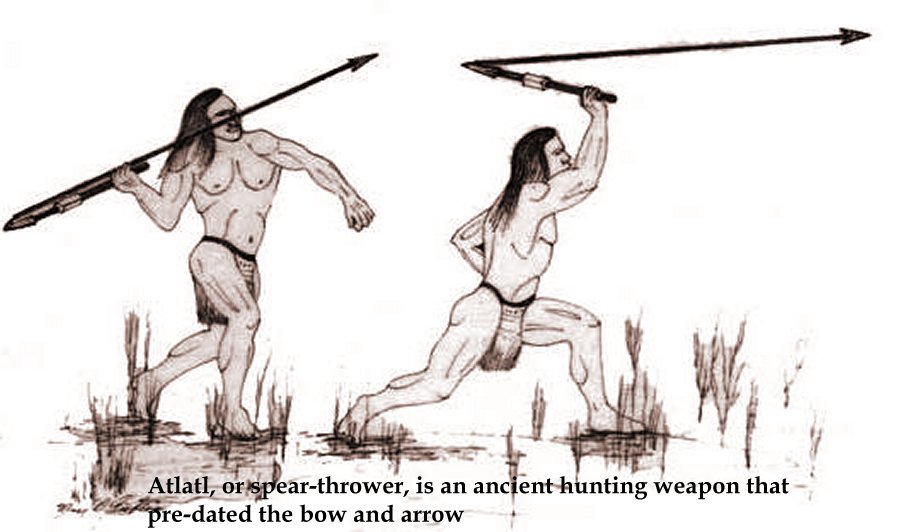 The atlatl has been fine-tuned with the adaptation and manipulation of varying lengths. A longer atlatl increases the range of the dart and a skilled warrior can hit a target over 100 yards away.

Tlahuitolli – the Aztec bow was 5 feet long and its arrows (yaomime) were pointed with flint, bone or obsidian, and kept in a quiver (mixiquipilli). 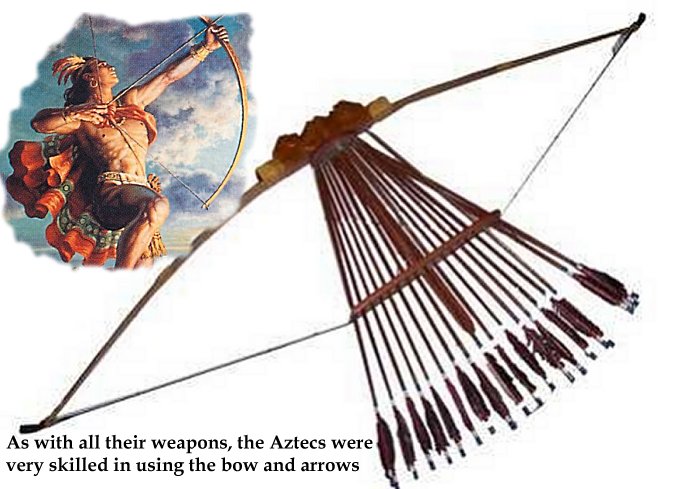 The Aztecs were very skilled in using the bow and arrow and could reach an object at the distance of 450 feet or even more.

Tematlatl (‘a sling’) – was another devastating weapon, made with fibers of agave plant (cactus) native to Mexico. This weapon hurled stones with strength and precision and they could easily harm an enemy soldier in full metal armor. Slings were used with stones, which were carefully shaped and prepared much earlier before the battle. The Aztecs never picked up stones on the battlefield.

The perfectly shaped stones it could reach 650 feet and were more efficient weapon than the arrows. 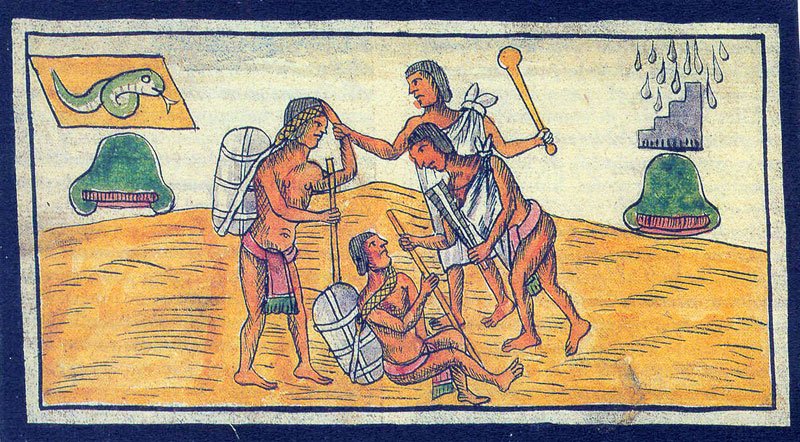 Quauhololli was a much simpler club. Various sources describe it has having a curved handle, with either a stone or wooden mace-head.. Image credit: Wikipedia

Quauhololli – was a prehistoric but unfortunately very effective hand-to-hand combat weapon used by the Aztecs. A mace-like weapon, the handle was made out of wood topped with a wooden, rock, or copper ball or sphere. It could easily crush the skull.

Armor among the Aztec soldiers was light and typically, shields and some types of armor were carved from wood. The warriors used Ichahuipilli, a short padded, quilted, jacket-like cotton armor but a waistcoat known as ‘cotton doublet’, which was covered with a layer of salt, was the most resourceful garment, usually worn under the military uniforms of the Knights of the Eagle and Jaguar and other military units.

This kind of absorbent ‘cotton doublet’ allowed the warriors to absorb the dissociated salt. When the garments were dried under the hot sun, the crystals would reform as solids inside the fabric of the garment.

D. Ryan, The Aztec: The Last Great Civilization of Mesoamerica