Ellen Lloyd - AncientPages.com - As many other great ancient civilizations, the Hittites had laws that regulated various aspects of their vast empire. Written somewhere from 1650-1500 BC, the Code of Nesilim was a document that stated ancient laws of the Hittites.

One of its most significant topics concerned the treatment of slaves.

The Hittites ruled the central Anatolian kingdom of Hatti from c. 1900 – 800 BCE. They formed the earliest known Anatolian civilization and employed an advanced system of government based on an established legal system. Their military was well trained, well equipped, and employed chariots that were the lightest and fastest of their time.

The Hittites created Hattusha, the capital of the kingdom, located in Turkey. The Hittite empire reached its height during the mid-14th century BC when it encompassed an area that included most of Asia Minor.

After 1180 B.C. the empire came to an end during the Bronze Age collapse. Several independent Neo-Hittite city-states were established and some of them survived until the 8th century BC. 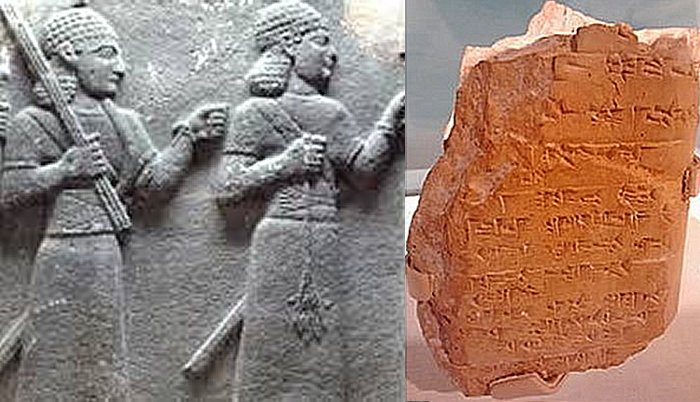 The Hittite laws have been preserved on a number of Hittite cuneiform tablets found at Hattusa (CTH 291-292, listing 200 laws). Copies have been found written in Old Hittite as well as in Middle and Late Hittite, indicating that they had validity throughout the duration of the Hittite Empire (ca. 1650–1100 BCE). Image via wikipedia

Some laws in the Code of Nesilim were rather unusual according to modern standards. For example, if a man raped a woman outdoors, he was sentenced to death. However, if the rape happened at home, it was deemed to be the fault of the woman and she was sentenced to die.

1. If anyone slay a man or woman in a quarrel, he shall bring this one. He shall also give four persons, either men or women, he shall let them go to his home.

2. If anyone slay a male or female slave in a quarrel, he shall bring this one and give two persons,either men or women, he shall let them go to his home.

3. If anyone smite a free man or woman and this one die, he shall bring this one and give two persons, he shall let them go to his home.

4. If anyone smite a male or female slave, he shall bring this one also and give one person, he shall let him or her go to his home.

5. If anyone slay a merchant of Hatti, he shall give one and a half pounds of silver, he shall let it goto his home.

6. If anyone blind a free man or knock out his teeth, formerly they would give one pound of silver,now he shall give twenty half-shekels of silver.

8. If anyone blind a male or female slave or knock out their teeth, he shall give ten half-shekels of silver, he shall let it go to his home.

10. If anyone injure a man so that he cause him suffering, he shall take care of him. Yet he shall give him a man in his place, who shall work for him in his house until he recovers. But if he recover, hes hall give him six half-shekels of silver. And to the physician this one shall also give the fee.

18. If anyone cause a female slave to miscarry, if it be the tenth month, he shall give five half-shekels of silver.

20. If any man of Hatti steal a Nesian slave and lead him here to the land of Hatti, and his master discover him, he shall give him twelve half-shekels of silver, he shall let it go to his home.

21. If anyone steal a slave of a Luwian from the land of Luwia, and lead him here to the land of Hatti, and his master discover him, he shall take his slave only.

24. If a male or female slave run away, he at whose hearth his master finds him or her, shall give fifty half-shekels of silver a year.

31. If a free man and a female slave be fond of each other and come together and he take her for his wife and they set up house and get children, and afterward they either become hostile or come to close quarters, and they divide the house between them, the man shall take the children, only one child shall the woman take.

32. If a slave take a woman as his wife, their case is the same. The majority of the children to the wife and one child to the slave.

33. If a slave take a female slave their case is the same. The majority of children to the female slave and one child to the slave.

34. If a slave convey the bride price to a free son and take him as husband for his daughter, nobody dare surrender him to slavery.

36. If a slave convey the bride price to a free son and take him as husband for his daughter, nobody dare surrender him to slavery.

40. If a soldier disappear, and a vassal arise and the vassal say, AThis is my military holding, but this other one is my tenancy, @ and lay hands upon the fields of the soldier, he may both hold the military holding and perform the tenancy duties. If he refuse the military service, then he forfeits the vacant fields of the soldier. The men of the village shall cultivate them. If the king give a captive, they shall give the fields to him, and he becomes a soldier.

98. If a free man set a house ablaze, he shall build the house, again. And whatever is inside the house, be it a man, an ox, or a sheep that perishes, nothing of these he need compensate.

99. If a slave set a house ablaze, his master shall compensate for him. The nose of the slave and his ears they shall cut off, and give him back to his master. But if he do not compensate, then he shall give up this one.

159. If anyone harness a yoke of oxen, his wages are one-half peck of barley.

164. If anyone come for borrowing, then make a quarrel and throw down either bread or wine jug, then he shall give one sheep, ten loaves, and one jug of beer. Then he cleanses his house by the offering. Not until the year has elapsed may he salute again the other's house.

170. If a free man kill a serpent and speak the name of another, he shall give one pound of silver; if a slave, this one shall die.

176. If anyone buy an artisan's apprentice, buy either a potter, a smith, a carpenter, a leatherworker, a tailor, a weaver, or a lace-maker, he shall give ten half-shekels.

187. If a man have intercourse with a cow, it is a capital crime, he shall die. They shall lead him to the king's hall. But the king may kill him, the king may grant him his life. But he shall not approach the king.

191. If a free man picks up now this woman, now that one, now in this country, then in that country, there shall be no punishment if they came together sexually willingly.

192. If the husband of a woman die, his wife may take her husband's patrimony.

197. If a man rape a woman in the mountain, it is the man's wrong, he shall die. But if he rape her in the house, it is the woman's fault, the woman shall die. If the husband find them and then kill them, there is no punishing the husband.

200. If anyone give a son for instruction, be it a carpenter, or a potter, or a weaver, or a tailor, or a smith, he shall give six half-shekels of silver for the instruction

As in all other ancient civilizations, slaves were not on the same level as free men. Yet, the Code of Nesilim was surprisingly fair, allowing slaves to marry whomever they wanted, to buy property, to open businesses, and to purchase their freedom. Under the Code of Nesilim, slaves were not treated as human chattel, or property that could be used and abused by their masters however they saw fit. They had a limited number of rights that guaranteed them a level of dignity and protection.