A. Sutherland - AncientPages.com - Despite that nanotechnology represents a new rather modern concept and is related to ultrahigh precision and ultra-small sizes, the term "nano" is old and comes from the Greek word "nanos" and means "dwarf". 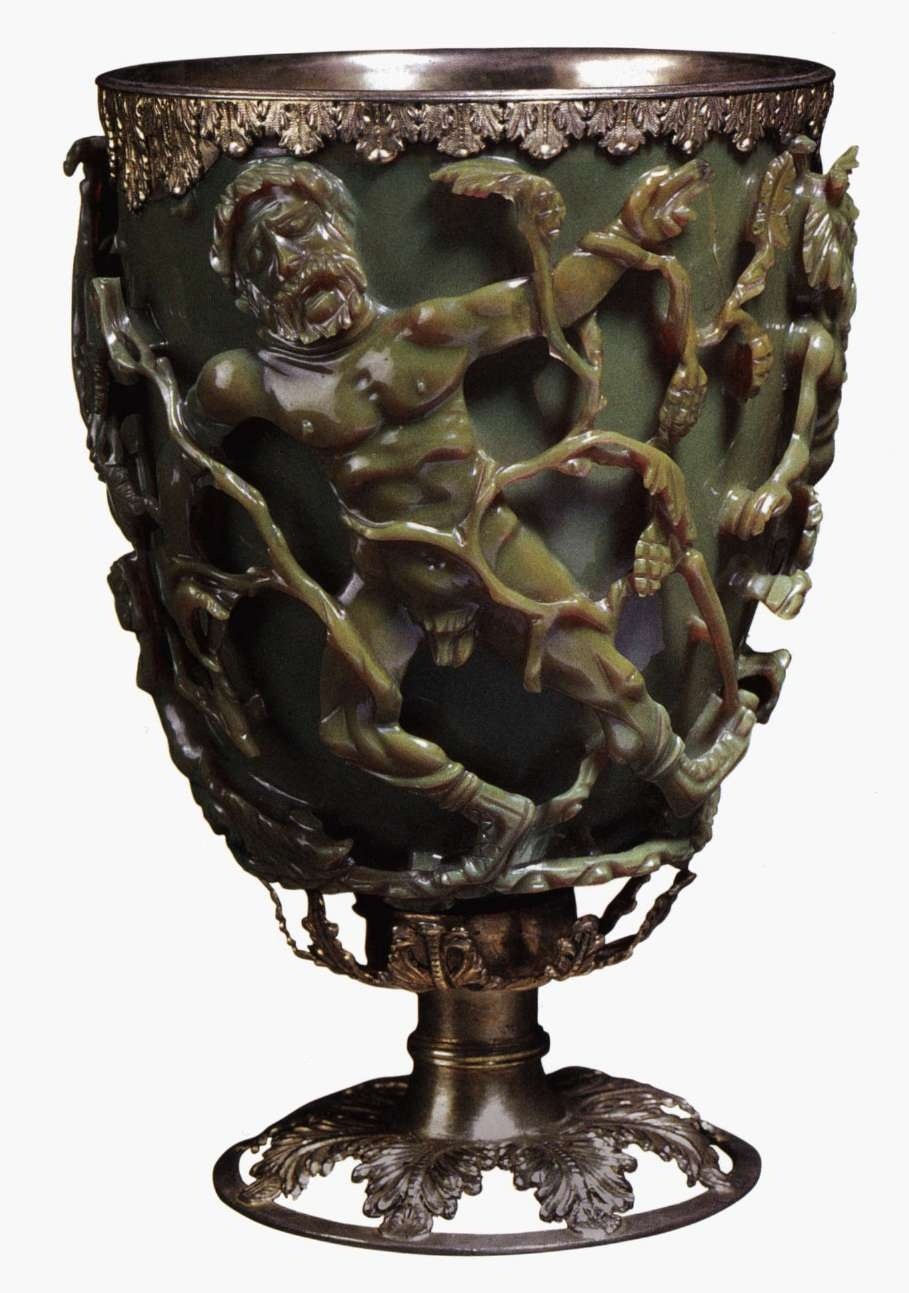 This extraordinary Lycurgus cup is the only surviving complete example made from dichroic glass, which changes color when held up to the light. When light is shone through the body of the cup it turns from opaque green to a glowing translucent red. The glass contains tiny amounts of colloidal gold and silver, which give it these unusual optical properties. Image credit: British Museum

Knowledge about metallic nanoparticles has already been used since ancient times, especially regarding the unusual colors seen in the ancient glass and ceramic objects.  It is believed that the use of metallic nanoparticles started with the beginning of glass-making in Egypt and Mesopotamia that dates back in the fourteenth and thirteenth centuries BC.

The most remarkable example of the use of metallic nanoparticles is the Lycurgus Cup, a piece of Roman glasswork dating from the fourth century CE, showing a mythological scene depicting the legend of King Lycurgus.

"....Glass-producing techniques were highly developed and workmanship was superb.
In the Lycurgus Cup, now housed in the British Museum, the 324 AD victory of Constantine over Licinius in Thrace was represented through the death of an enemy of Dionysius, Lycurgus, who is shown being overcome by vines...." Daniel L. Schodek, Paulo Ferreira, Michael F. Ashby write in their book "Nanomaterials, Nanotechnologies and Design". 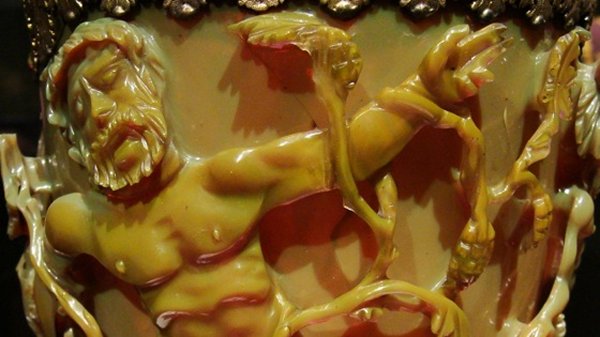 The Lycurgus Cup shows that our ancestors were indeed far ahead of their time. Examination of the 1,600-year-old Roman chalice at the British Museum, known as the Lycurgus Cup reveals ancient Romans were familiar nanotechnology.

The scene on the cup depicts an episode from the myth of Lycurgus, a king of the Thracians (around 800 BC).

A man of violent temper, he attacked Dionysos and one of his maenads, Ambrosia. Ambrosia called out to Mother Earth, who transformed her into a vine.

She then coiled herself about the king and held him captive.

The cup shows this moment when Lycurgus is entrapped by the branches of the vine, while Dionysos, a Pan and a satyr torment him for his evil behavior.

It has been thought that the theme of this myth - the triumph of Dionysos over Lycurgus - might have been chosen to refer to a contemporary political event, the defeat of the emperor Licinius (reigned AD 308-24) by Constantine in AD 324. 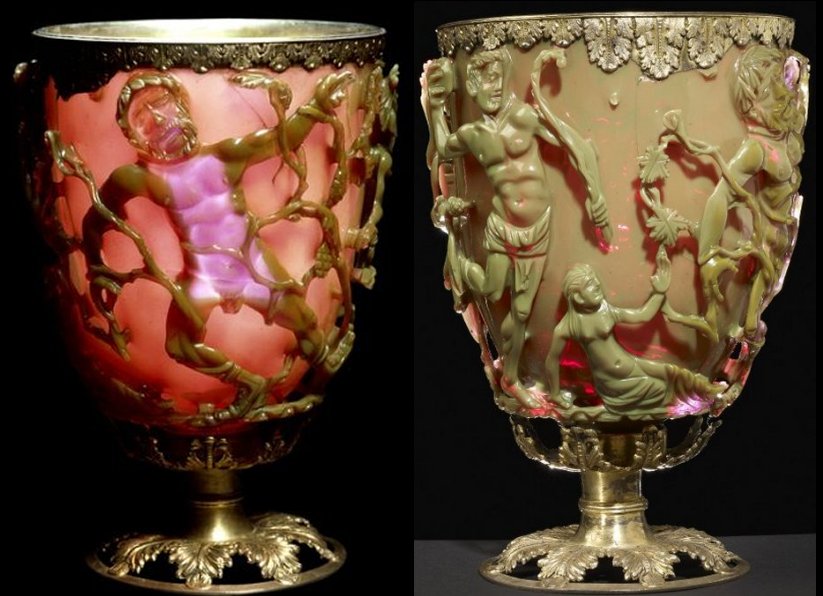 The most famous example of the use of metallic nanoparticles concerns a piece of Roman glasswork, the Lycurgus Cup, dating from the fourth century CE, showing a mythological frieze depicting the legend of King Lycurgus

The Lycurgus Cup exhibits a color-changing property that makes its glass take on different hues, depending on the light source. The changes of the colors have been a scientific mystery for a very long time.

In the 1990s researchers noticed tiny particles of silver and gold in the cup's glass and it became clear the light played an important role when the cup was created by the Romans. When hit with light, electrons belonging to the metal flecks vibrated in ways that alter the color depending on the observer's position.

Researchers make attempts to build the unique technology used in the artifact and apply it in the medical field but they cannot do it using the original artifact, so they use a replica of the artifact allowing them to pursue their ideas. The replica is a color-changing cup on a much smaller scale by imprinting billions of microscopic wells on a plastic plate with the same nanoparticles.

According to the British Museum, this is the only complete example of "dichroic" glass. The opaque green cup turns to a glowing translucent red when light is shone through it. The glass contains tiny amounts of colloidal gold and silver, which give it these unusual optical properties. 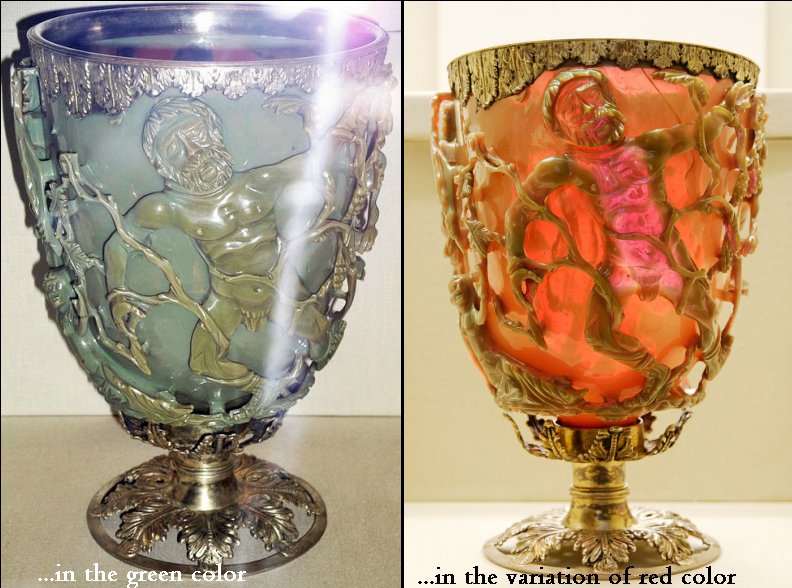 The cup is also the only figural example of a type of vessel known as a 'cage-cup'. The cup was made by blowing or casting a thick glass blank.

This was then cut and ground away until the figures were left in high relief. Sections of the figures are almost standing free and connected only by 'bridges' to the surface of the vessel.

According to Historia Augusta", a late Roman collection of biographies of the Roman Emperors, written in Latin, and possibly dated to the third and early fourth centuries or, two dichroic glasses were delivered as the gift from Hadrian to his brother-in-law Servianus through a record.

Possibly, this might have been one of these. Vopiscus detailed some dichroic glasses in “The Lives of Firmus, Saturninus, Proculus and Bonosus” from the "Historia Augusta".

He refers to correspondence supposedly composed by Hadrian to his brother-in-law Servianus:

“I am giving you over some glasses, shifting colors, given to me by the priest of a temple, especially to you and my sister. I would like you to utilize them on feast-days”.

The Lycurgus cup is an amazing artifact - a proof of very advanced skills of its manufacturer.
The result of this extreme work is a high sculpture linked to the surface of the glass with thin connections. On the Lycurgus cup, these connections are grapevines along with other figural components.

Were the ancient Romans familiar with nanotechnology? Is it one of alchemy's secrets? If not, where did this knowledge and technological skills come from? Some believe this extraordinary artifact is far older than ancient Greece or Rome.

If the Greek or Roman masters invented this nanotechnology, why are there no other examples of their skills?