A. Sutherland - AncientPages.com - Do these mysterious ancient carvings represent the faces of "devils" or rather unknown mysterious beings that once upon a time, in a distant past visited this place?

Who were these creatures? What happened to them? 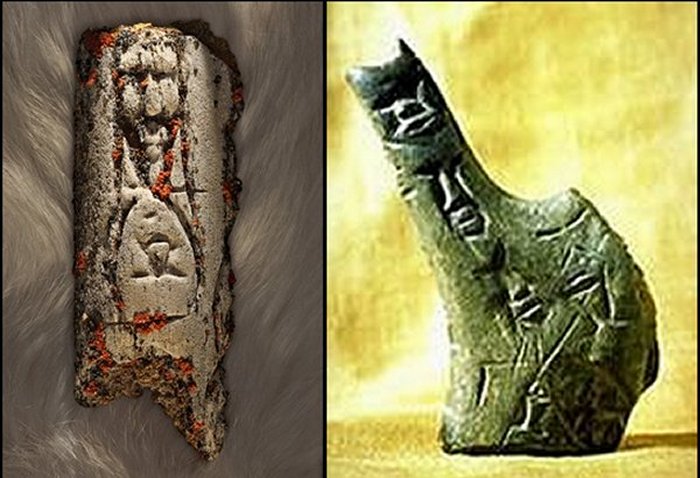 Could engravings simply represent the faces of the Dorset people?

Some say they were giants but many people do not even remember how  old these carvings are. Why do the faces have horns?

Some of Qajartalik’s petroglyphs can be only visible in adequate light, and while most of them depict anthropomorphic features, they are not  shown publicly representations of human figures.

Isolated, wind-swept Qajartalik is located about 15 km from the community of Kangiqsujuaq, (formerly known as Wakeham Bay), Quebec, Canada. From a distance, the rocky island of Qajartalik looks like a dark strip of soapstone.
On its 120-metre-long kayak-shaped ridge, there are carvings that some have dubbed "devil's faces."

This ancient sacred place is also called "the Island of the Stone Devils". 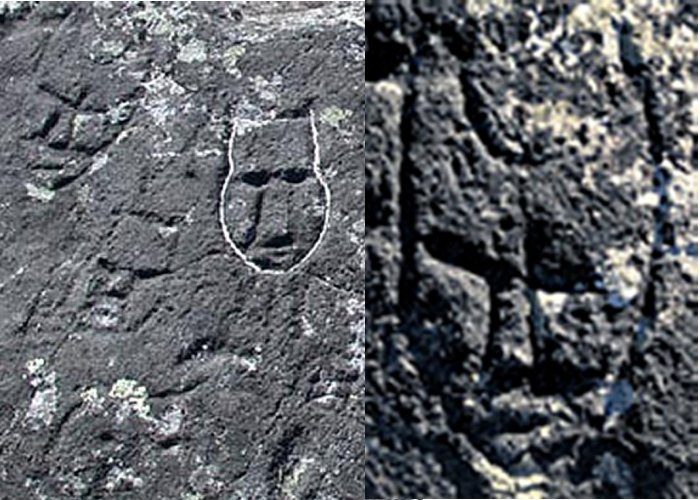 There are 170 carved faces at this site. Precise methods were used in their production, and most of them are symmetrical.

In shape, these etchings resemble the tiny carved masks that archeologists associate with the Dorset, or Tuniit, culture, believed to have flourished in the Eastern Arctic about 1,000 years ago.

However, according to some other sources, the Dorset Culture existed much earlier, which means 2300 BC - 1000 BC.

Some display cat-like features and appear to have horns. Lines radiate from many of the mouths, perhaps symbolizing the breath of a shaman. 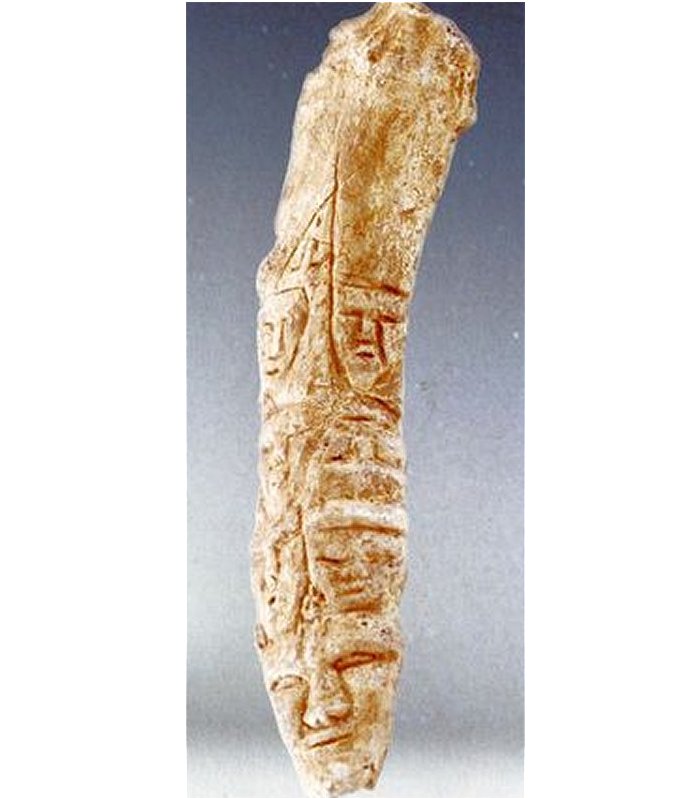 Is it really possible to carve the faces in hard stones with help of microblades, endblades, scrapers and knives or were more sophisticated instruments used to preserve the faces of the arrivals for years to come?

"These can be interpreted as portrayals of living persons who may have lived in the close proximity of the ‘craftsmen’, or most likely different spirits.

Most of the time depictions of humans do not portray the full-size person but their face.

Other carvings dated to Dorset culture.

"The most common vehicles of portrayal of faces are masks, maskettes, multiple, face carvings ... and "the most peculiar facial type displayed on Dorset artifacts is: triangular shape with rectangular upper face and strongly pointed chin [and…] round in outline with accentuated cheekbones and underemphasized chins on multiple face carvings..." writes Zságer, L.ászló of the Pázmány Péter Catholic University in Hungary, in his paper "Miniature Carvings in the Canadian Dorset.

In the early 1960s, a Canadian anthropologist and ethnographer, Bernard Saladin d’Anglure documented 95 carvings at Qajartalik. During his later expeditions (from 1996 to 1998) with Avataq, researchers were able to identify additionally 70 petroglyphs, bringing the site’s total to 165. 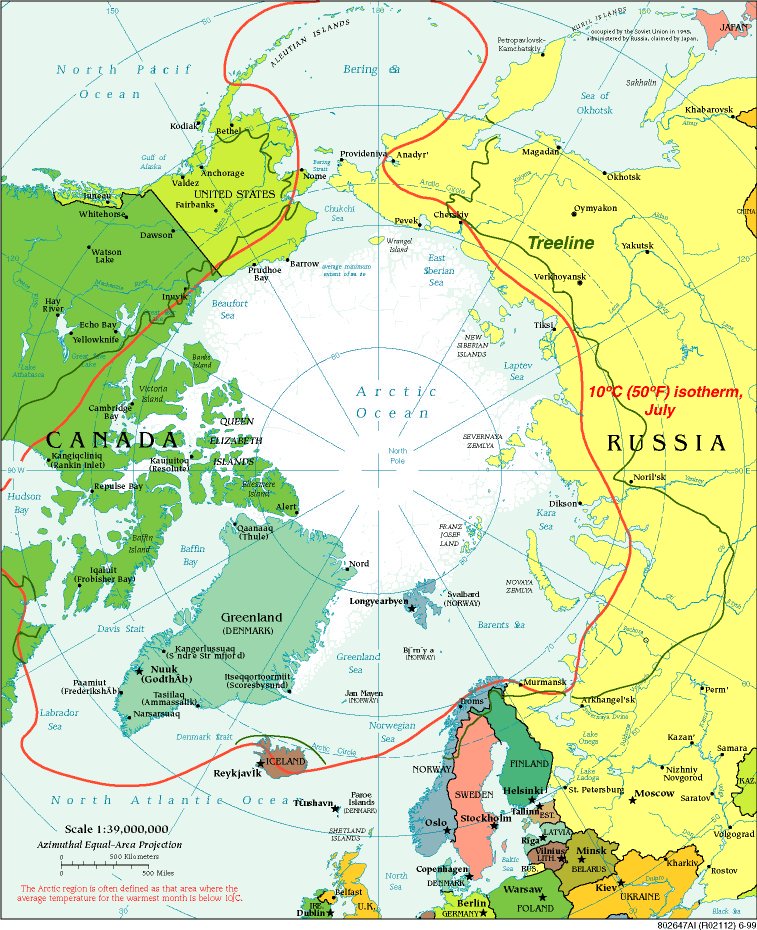 Some of Qajartalik’s very ancient petroglyphs are only visible in adequate light, and most of them portray anthropomorphic features.
The Qajartalik petroglyphs are unique manifestations of artistic expression that belonged to the last pre-Inuit people, what archaeologists call the Dorset Culture.

Miniature artifacts and Dorset art, which might be treated as the continuation of Pre-Dorset art, have been long debated and have risen numerous speculations regarding the cosmology, religious beliefs and healing practices of Dorset people, as well as the functions these carvings might have had. 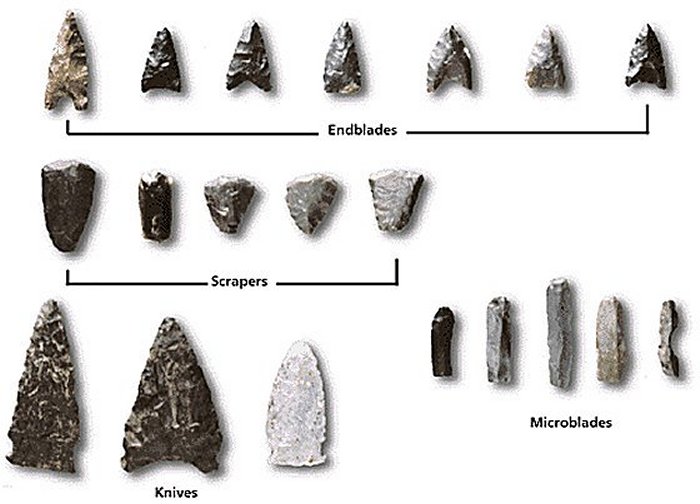 Were such primitive tools used to create the carvings in stone?

Qajartalik appears to be the only place where people transposed onto soapstone, and on an enormous scale, the distinctive figures usually found on much smaller artifacts made of bone, ivory or horn. 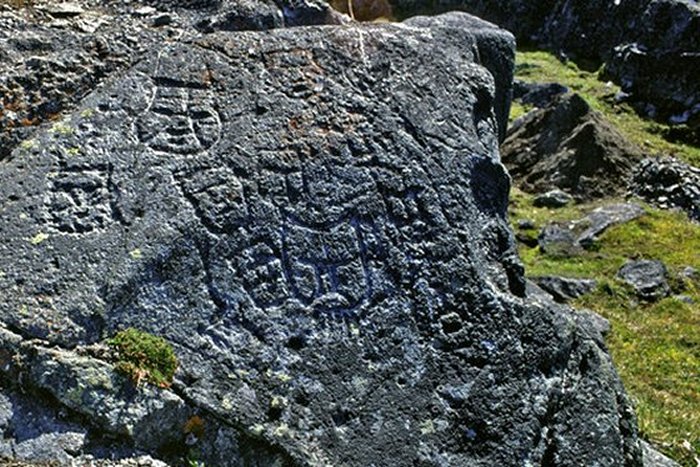 In 1996, Avataq Cultural Institute began archaeological studies of these petroglyphs, which are considered the only left legacy after the extinct Dorset people. It is estimated these enigmatic carvings were created 800 to 2,000 years ago. There are 170 faces and all of them are different but they cannot be found in other places in the North.

Inuit refer to these people as giants, the Tuuniit, in their oral history and legends. Archaeologists have found the remains of Dorset settlements at several locations in and around the present town site.

Some display cat-like features and seem to have horns. Lines radiate from many of the mouths, perhaps symbolizing the breath of a shaman.

Many small carvings are found at Dorset sites. The masks, drums and carved teeth often found were probably the property of a shaman. Many carvings seem to have magical or religious connotations signify the importance of religion to these people.

Because of the look of these faces, some local people say "the devil" controls Qajartalik.

According to some residents the petroglyphs are of pagan origin and the place is "invaded" evil spirits. Scientists believe that the Dorset culture, extinct now, was an artistically advanced civilization that may have been driven from the eastern Arctic by the Thule, the ancestors of today's Inuit.

Yet, there are still many intriguing questions. Who were these beings? Where did they come from? Were they giants or were they natives to the region? What kind of technology did the ancient use to carve these faces into hard stone?

Qajartalik's faces are the most unique carvings located that far in north and these enigmatic faces remain a mystery.