Coverdale was a clergyman and Classics scholar who produced the first complete printed English Bible.  He was born most probably in Yorkshire, in 1488 but little is known about his early life. 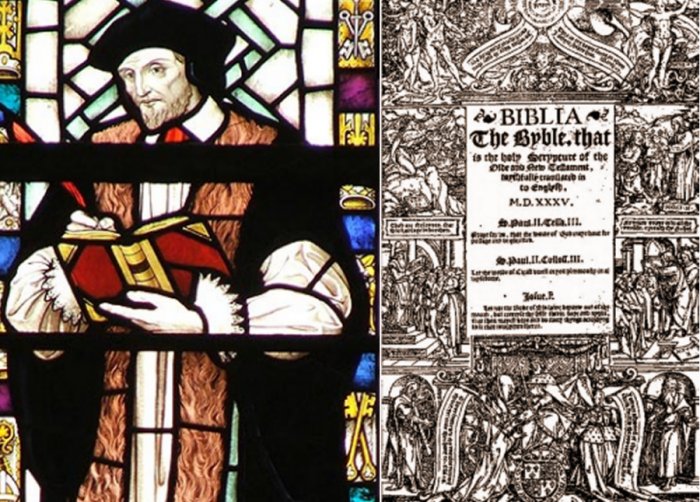 Coverdale studied at Cambridge and became priest at Norwich in 1514 and entered an Augustinian friary in Cambridge, where Robert Barnes was prior in 1523; it is believed that Barnes influenced Coverdale in favor of Protestantism.

Three year later, Barnes was tried for heresy in 1526 and  Coverdale assisted in his defense, and shortly afterward left the convent and began to preach in Essex.

Later, he studied at Cambridge, receiving a Bachelor’s degree in canon law 1531.

Only a few years later, Coverdale had to leave the country to escape persecutions, during the reign of Henry VIII.

While in exile, he assisted in translations of the Bible into English.

On This Day In History: Coverdale Bible Printed In English For The First Time – On Oct 4, 1535

In 1535, Myles Coverdale  became the first person to print an entire Bible in the English language. In 1537 some of his translations were included in the Matthew-Tyndale Bible, the first true, direct English translation of the complete Bible. In 1538 he was in Paris, superintending the printing of King Henry VIII’s "Great Bible," of 1539, and published an English New Testament in London and Paris.

After, the death of Henry VIII, in Coverdale could return to England, but only for a short period of time. During this time, Thomas Cromwell (his friend and protector since 1527) was executed. Again, it was time to leave England and so Coverdale did. He finally could return to his country but decline to retake the position of Bishop of Exeter; instead preferring to receive very small charge from a small church in London.

Last years of his life, Coverdale was particularly respected for his preaching and biblical translations.

Myles Coverdale was said to be a pious, laborious, generous, and a very honest and good man.