AncientPages.com - Excavations conducted in one of Europe’s oldest prehistoric settlements – the Solnitsata (‘Salt Pit’), located in the vicinity of a town in Provadia, in northeastern Bulgaria, shed light on the life of a complex prehistoric society that once lived in the area.

One of the latest discoveries is a gold jewel that is at least 6,300 years old.

“This is the first time we have found gold here. But we also have hundreds of other new finds,” says Prof. Vasil Nikolov, from the National Institute and Museum of Archaeology of the Bulgarian Academy of Sciences, who led the team of archaeologists excavating the necropolis at Solnitsata. 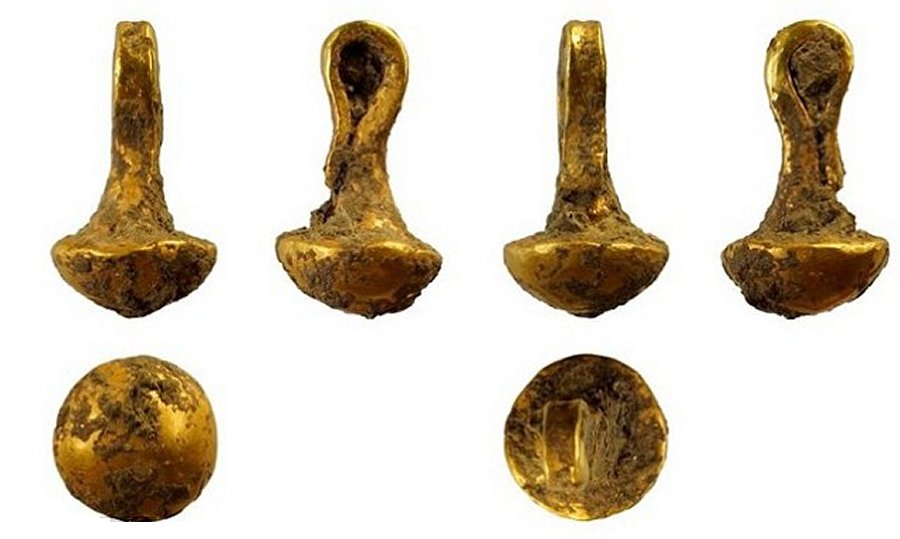 The sophisticated gold jewel weighs about 2 grams and appears to be made of 23-24 carat gold, and it was discovered not inside one of the graves but between them, which might testify to some kind of a more special ritual, according to Nikolov. Credits: Bulgarian Academy of Sciences

The sophisticated gold jewel weighs about 2 grams and appears to be made of 23-24 carat gold, and it was discovered not inside one of the graves but between them, which might testify to some kind of a more special ritual, according to Nikolov.

The necropolis of the ‘Salt Pit’ is dated to around 4,300 BC, i.e. the Late Chalcolithic Period, but Nikolov believes the gold could be 200-300 years older, according to Archaeology in Bulgaria.

This prehistoric society specialized in the production of salt which was exported to distant markets. The salt production boosted trade, and salt itself was probably used as a currency at first, before the arrival of gold. Credits: Bulgarian Academy of Sciences

It is unclear whether the gold jewel was worn by a woman or by a man, in order to signify his high social status, and it was not worn as a decoration but as a status symbol.

Archaeologists conducting the excavations at The Salt Pit have found lots of arrow tips and a spear, bone decorations, and an intact bone idol which could become an emblem of the Bulgarian town of Provadiya once it is fully studied. The arrow tips and the spear found near the fortress wall mean that the place was the arena of fierce battles. Credits: Bulgarian Academy of Sciences

It’s important to add the stone fortress of the ‘Salt Pit’ is dated to 4,700 BC, which makes it 6,700 years old, and the oldest stone fortress in Europe, when compared with the legendary city of Troy, which was founded around 3,000 BC.

“The [fortress] wall that we are unearthing right now shows that the fortress had a shape of a circle with a diameter of about 90 meters. It is interesting that back then the people had valuable knowledge about military affairs.

In order to ensure a better defense, the wall was not made round but its sections follow straight lines. That’s because the round shape would have been harder to defend.

"The fortress walls have impressive foundations which are about 4 – 4.2 meters wide, and reach a height of about 6 meters,” the archaeologist says.