A. Sutherland - AncientPages.com - One of the earliest civilizations that developed under the Olmec influence is represented by an unknown complex of ruins located near Mexico City and known by its Aztec name - Teotihuacan - "place of the gods".

The Aztecs did not build this city; it was already there when the Aztecs arrived. There are no written documents of this civilization and the ruins of its capital were covered by vegetation when the first Spaniards reached it.

The pyramids of Teotihuacan are but one part of an expansive city designed to be a perfect reflection of heaven.

There is something mysterious and definitely unearthly about Teotihuacan's deserted streets and its secrets.

Even today there are many unanswered questions: Teotihuacan's original name is unknown; we don't know who built the city with its stunning pyramids. Builders were master architects and highly skilled craftsmen with good knowledge of the heavenly bodies. The dimensions for the orbits of Mercury, Venus, Earth, Mars, Jupiter, Saturn, Uranus, and even Neptune and Pluto were apparently known to them.

In 1983, archaeologists stumbled upon rooms with unusual ceilings that are insulated by a layer of mica inserted between two layers of stone (stone-mica-stone) to a total thickness of approximately 6 inches (15 cm).  It is still not solved what purpose these rooms served.

Mica, also known as muscovite ("Moscow glass") is a component of granite. It is a colorless mineral with very special properties that have been known for long. The history of this mineral dates back to pre-historic times, as mica was known to ancient civilizations of  India, Egypt, Greece, the Roman Empire, China. The earliest use of mica has been found in cave paintings created during the Upper Paleolithic period (40,000 BC to 10,000 BC).

Mica was also known and used in the Aztec civilization of the New World,  the last of the powerful Mesoamerican civilizations in the Post-classic world (from about 750 CE). It was at the time when Teotihuacan was in decline until the arrival of the Spanish conquest in 1521 CE, but this mineral was found in many places of Teotihuacan. The question is: why was it so important to bring so much mica? 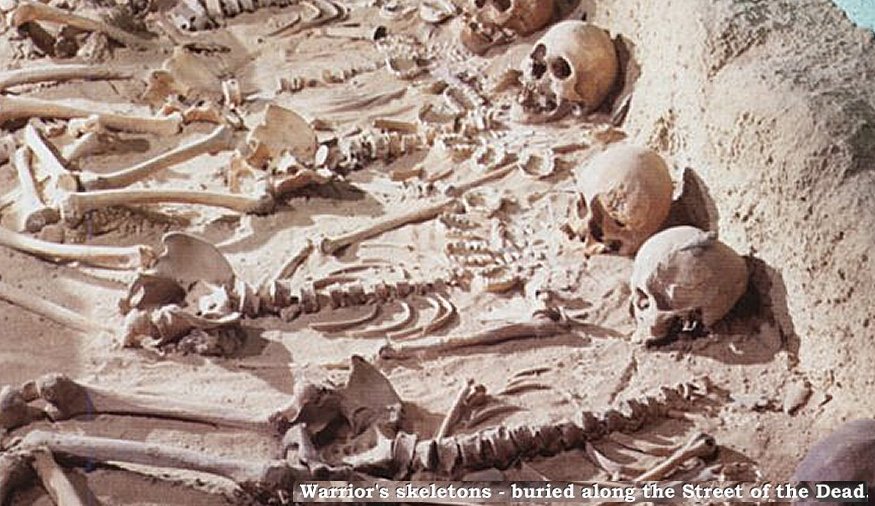 'The bodies, many of which were decapitated, dated from between A.D. 50 and 500, and were killed at different times to dedicate new stages of construction of the pyramid just north of Mexico City. The victims were likely either captured in war or obtained through some kind of diplomacy..'

"It would seem that Teotihuacan was laid out and constructed as some kind of waterwork, employing water to flood the city.

Was it for some technological processes? In support of that theory is the curious discovery of huge sheets of mica around the Pyramid of the Sun. Sitchin concludes: Alongside the third segment down from the Pyramid of the Sun, excavations of a series of interconnected subterranean chambers revealed that some of the floors were covered with layers of thick sheets of mica.

This is a silicone whose special properties make it resistant to water, heat, and electrical currents. It has therefore been used as an insulator in various chemical processes and electrical and electronic applications, and in recent times in nuclear and space technologies."

The particular properties of mica depend to some extent on its content of other trace minerals, and thus on its geographic source. According to expert opinions, the mica found at Teotihuacan is of a type that is found only in faraway Brazil.

Traces of this mica were also found on remains removed from the Pyramid of the Sun’s stages when it was being uncovered early in this century. What was the use to which this insulating material was put at Teotihuacan? Our own impression is that the presence of… the sloping avenue; the series of structures, subterranean chambers, tunnels; the diverted river; the semi-subterranean sections with their sluices; and the underground compartments lined with mica—were all components of a scientifically conceived plant for the separation, refining or purification of mineral substances." 1

The so-called mica chambers remain one of several unsolved mysteries of Teotihuacan. Mica is highly elastic, heat-resistant up to 1470 degrees F (800 degrees C), and resistant to both sudden temperature changes (heat/cold) and organic acids. It is unclear what purpose these special rooms served.

According to one theory, sensitive materials were stored in these chambers for protection against extreme external heat for example. Other theories suggest the heat was generated inside the chambers and that the rooms may have served as smelting ovens.