AncientPages.com - The Peterborough petroglyphs in Ontario, Canada are just as mysterious as controversial.

There are those who are convinced the images were deliberately created in memory of strangers who cross the ocean and came to the country on a quest for copper. 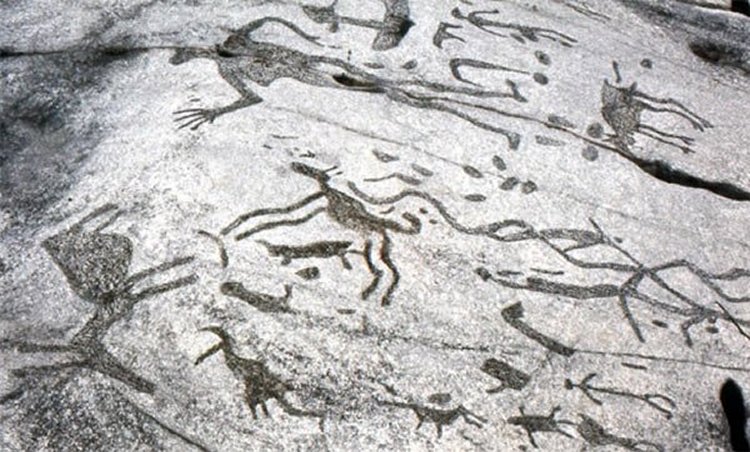 In 1924, historian Charles Kingam "re-discovered" the Peterborough petroglyphs that are a collection of over 900 ancient images carved into crystalline limestone.

Orthodox science states that the carvings were created by the Algonkian people between 900 and 1400 AD. Today, the First Nations people of Ontario call the carvings Kinomagewapkong, meaning "the rocks that teach."

About 300 of these are decipherable shapes, including humans, shamans, animals, solar symbols, geometric shapes, and boats.

The problem is that boat drawings among the petroglyphs do not resemble the traditional boat of the Native Americans. For example, one solar boat, a stylized shaman vessel with a long mast surmounted by the sun - is typical of petroglyphs found in northern Russia and Scandinavia.

Another possibility is that the boat is of ancient Celtic origin.

One person who subscribes to this theory is Robert Burcher who is convinced ancient Celts sailed across the ocean by way of Iceland, then Greenland and the shores of Labrador, through Hudson Bay to the Great Lakes in Ontario and Michigan in search of a mineral as precious to them as gold.

Burcher who researched the petroglyphs is certain that New World aboriginal peoples met a handful of Celtic sailors near Peterborough, Ontario more than two thousand years ago and made carvings of these strangers and their boats.

Burcher who visited the petroglyph site in the early 1990s was at the time unaware of the history or any current interpretations of the carvings. As a professional photographer, he was enchanted by the mystery and the mood of the area and the carvings themselves.

As an avid sailor, Burcher was particularly taken with what appeared to be an image of a sailing ship among the carvings. Burcher knew there was no sailing tradition among the native peoples who had lived for generations around the lakes and in fact, they were afraid of the great expanses of water.

Why would a people who feared the water carve the image of a sailing ship into the rock with other sacred images?
That question set off a 20-year journey of research and investigation that has led Robert to the conclusion that the images carved into the rock record the story of a day when native people encountered a party of Celtic explorers on their hunting grounds.

At the Peterborough site, Burcher also found an image of what looked like a person with a long skinny neck and a face made out of a sun. The images suggested it was a person playing a horn. Interestingly, Burcher found such a horn in Ireland, the Trumpa Creda, and the only man to play that horn in 300 years, Simon O'Dwyer.

Burcher is not a professional scientist or archaeologist, but his theory is intriguing nevertheless.

He said he's faced negative criticism from some professional archaeologists, but he still believes he has a story.

"I want to validate it," he said. "It's a sort of justice for ancient, perceived injustices ... the victors always write the history."