Conny Waters - AncientPages.com - Ribe was an important trading town in the Viking Age.

Glass bead-making is one of the traditional Viking-Age crafts with a long history. Colorful beads have been found throughout the Viking World and were considered an important luxury item.

At the beginning of the 8th century, a trading place was established on the north side of the river Ribe, to which traders and craftsmen flocked from far and wide to manufacture and sell goods such as brooches, suit buckles, combs and colored glass beads.

Glass analyzed in this study; Colorless and weakly greenish-yellowish glass 'cubes' gilded with a thin plate of gold on one exterior surface (still attached on cube in upper right side of the pile) and white Viking beads analyzed in this study. The chemistries of the latter showed how the glassmakers in Ribe had found an easy way to 'upcycle' the cubes in an effort to save fuel and energy by simply crushing and remelting them in open air at low temperature, thereby trapping air so bubbles could not escape. This way, they could produce opaque white beads with a minimum use of resources. Credit: Museum of Southwest Jutland

When glass became a scarce commodity in the Early Medieval time, colored glass cubes—so-called tesserae—were torn down from mosaics in abandoned Roman and Byzantine temples, palaces and baths, transported North and traded at emporia towns such as Ribe, where the beadmakers melted them down in large vessels and shaped them into beads.

Until now, archaeologists have assumed that the pearl makers used the opaque white tesserae as raw material for the production of white, opaque beads. 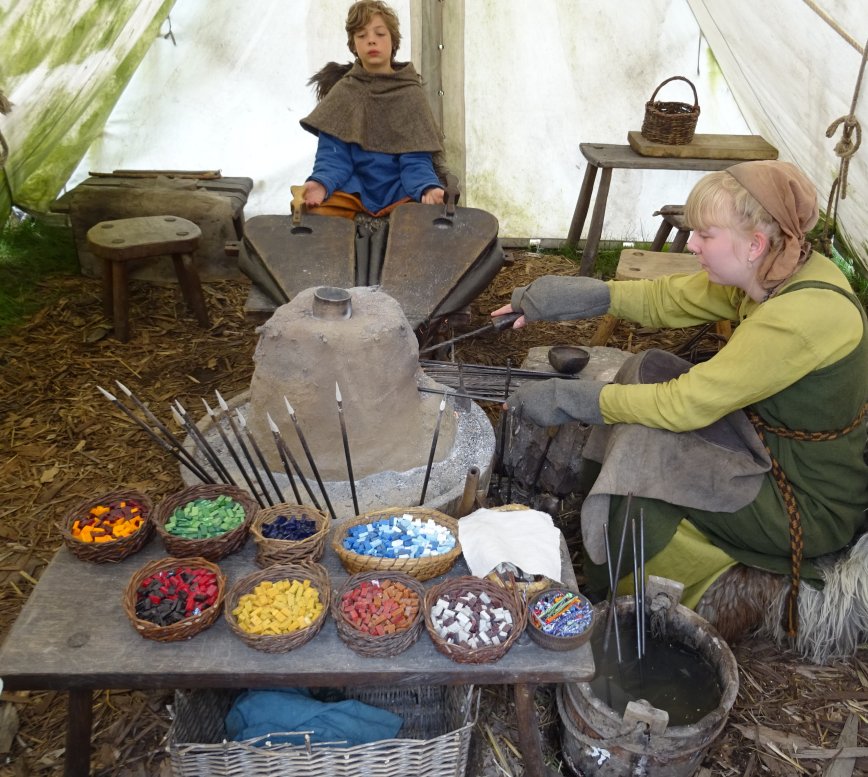 And it is here that a geochemist and an archaeologist from Aarhus University together with a museum curator from Ribe have made a surprising discovery, which they have just published in Archaeological and Anthropological Sciences.

The chemical composition of white Viking beads from one of the earliest workshops showed that the glassmakers had found a more sustainable way to save time and wood for their furnaces: crush gold-gilded, transparent glass cubes, remelt them at low temperature, stir to trap air in the form of bubbles, and finally wrap the glass around an iron mandrel to form beads and voila—opaque white beads created in a short time using a minimum of resources.

The valuable ultra-thin sheets of gold stuck to the surface of the gold mosaic stone were of course salvaged by the glassmaker prior to remelting the glass, but the new findings show that some gold inevitably had ended up in the melting pot.

Tiny drops of gold in the white beads, the many air holes (which is why the beads are opaque), as well as the fact that there are no chemical color tracers present, the researchers show that it was in fact the gold mosaic stones that was the raw material for the beads. 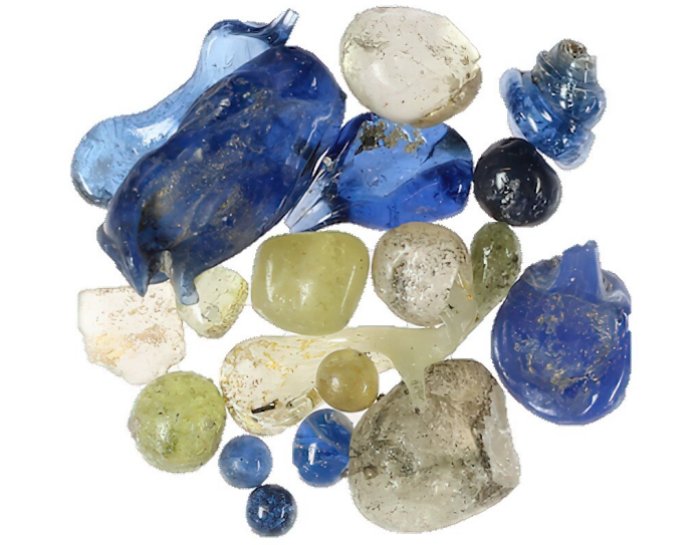 Such traces of gold were found not only in the white but also in the blue beads from the same workshop. Here the chemistry shows that the glassmaker's recipe consisted of a mixture of the blue and golden mosaic stones. Mixing them was necessary because the Roman blue mosaic stones contained high concentrations of chemical substances which made them opaque—and therefore ideal for mosaics, but not for blue beads. By thus diluting the chemical substances, the result was the deep blue, transparent glass that we know from Viking Age beads.

The bead maker in Ribe could instead have chosen to dilute the glass mixture with old shards from funnel beakers, which were also found in the workshop. But these turned out to be old, contaminated, Roman glass that had been remelted over and over again.

"And the glassmakers in Ribe were clearly connoisseurs who preferred the clearest glass they could get their hands on," says Gry Hoffmann Barfod from the Department of Geoscience at Aarhus University. She adds that "for a geochemist, it has been a privilege to work with the fantastic material, and to discover how relevant the knowledge stored here is for our society today."

The interdisciplinary study was a collaboration between Gry Barfod, Søren Sindbæk, professor of archeology at the Danish National Research Foundation's Center for Urban Network Development (UrbNet) at Aarhus University, and museum curator Claus Feveile at the Museum of Southwest Jutland specializing in the Viking Age and Ribe's earliest history.

"The most outstanding achievements at the Ribe trading site were not just the products, but also the circular economy and their awareness to preserve limited resources," states professor Søren Sindbæk.

And museum curator Claus Feveile comments, "These exciting results clearly show the potential of elucidating new facts about the Vikings. By combining our high-resolution excavations with such chemical analyses I predict many more revelations in the near future."

Søren Sindbæk and Claus Feveile headed the archaeological excavations of the Northern Emporium Project from 2016-2018, where new high-definition approaches for the first time allowed for a resolution down to a few decades within the extremely well-preserved Ribe stratigraphy. The finds from the excavations are currently displayed inside reconstructed replicas of the beadmakers' workshops in the new special exhibition at the Ribe Viking museum.