AncientPages.com - A 1,800-Year-old painted tomb has been unearthed by archaeologists from the Department of Antiquities and the discovery that was made at the ancient site of Capitolias in northern Jordan.

The subterranean tomb measures 52 square meters and is decorated with about 260 figures depicting including gods, humans, and animals, all painted on the walls of the largest chamber, reports CNRS.

The clearing of the site of Capitolias, with the assistance of Dionysos and other gods. Image credit: Julien Aliquot/ HiSoMA, 2018

"This tomb, which consists of two funerary chambers and contains a very large basalt sarcophagus, is in an excellent state of conservation, even though it appears to have already been 'visited,” said Julien Aliquot, one of the researchers from HiSoMA’s.

"The tomb is located on the site of the ancient city of Capitolias, which was founded in the late first century CE, and was part of the Decapolis, a region that brought together Hellenized cities (provided with Greek-style institutions but belonging to the Roman Empire) in the southeastern area of the Near East, between Damascus and Amman."

These teeming figures compose a narrative that is arranged on either side of a central painting, which represents a sacrifice offered by an officiant to the tutelary deities of Capitolias and Caesarea Maritima, the provincial capital of Judaea," explained Aliquot.

The tomb also contains a large painting displaying the construction of a rampart along with 60 inscriptions informing what the figures in the painting were doing. 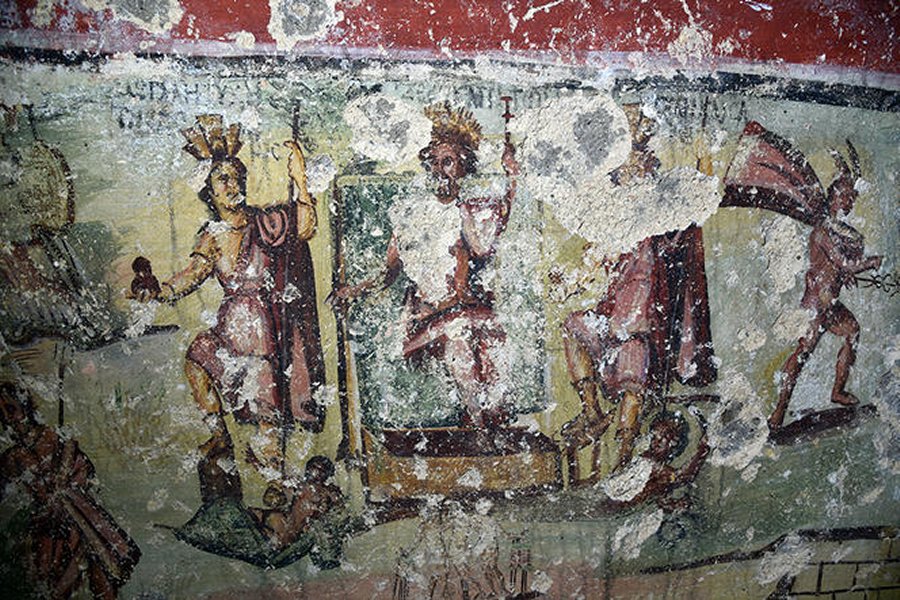 "These 60 or so texts painted in black, some of which we have already deciphered, have the distinctive feature of being written in the local language of Aramaic, while using Greek letters," says Jean-Baptiste Yon, of the same research unit.
Whoever entered the tomb, before it was closed, first glimpsed on his left banqueting deities lying on beds, and tasting offerings brought by humans smaller than themselves. Again to the left of the entrance, a second painting with a country landscape shows peasants busy working the earth with the help of oxen, gathering fruit, tending grapevines.

The next panel depicts woodcutters chopping down various species of trees with the help of gods, an exceedingly rare subject in Greco-Roman imagery.

No less original, to the right of the entrance, is a large painting illustrating the building of a rampart. 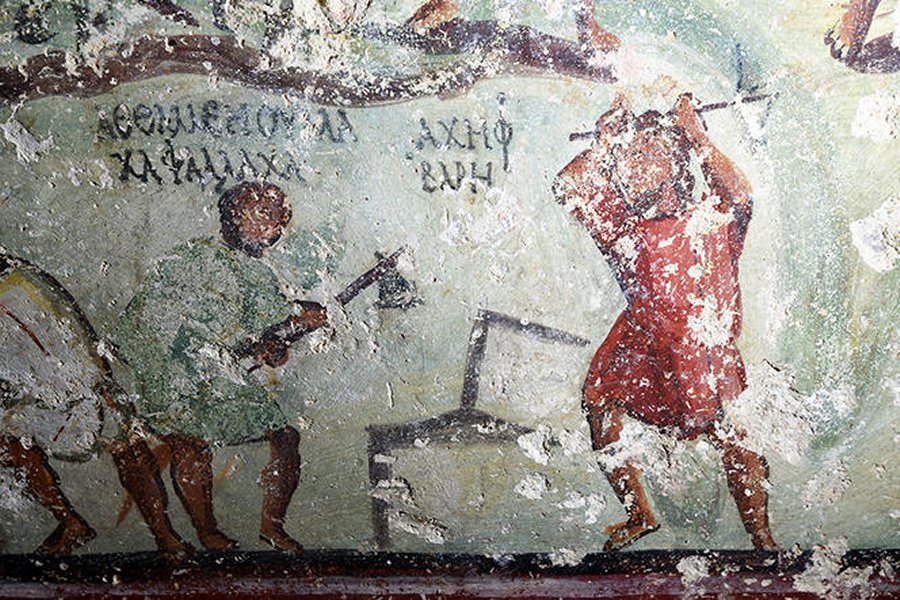 "Characters resembling architects or foremen stand alongside laborers who are transporting materials on the backs of camels or donkeys, with stone cutters or masons climbing walls, sometimes resulting in accidents. This precise and picturesque scene of a construction site is followed by the last painting, in which a priest offers another sacrifice in honor of the city's guardian deities," explained Aliquot.

A Head Of A Statue Dated To 700 BC, Animal Figurines And Jordan Valley’s Occupation History

Finally, displayed on the ceiling and walls on both sides of the entrance is a more classical composition evoking the Nile and the marine world, in which nymphs ride aquatic animals flanked by cupids, while a central medallion combines signs from the zodiac and the planets around a quadriga.

Researchers believe that the figure buried in the tomb is the person who had himself represented while officiating in the sacrifice scene from the central painting, and who consequently was the founder of the city.

"His name has not yet been identified, although it could be engraved on the lintel of the door, which has not yet been cleared," said Pierre-Louis Gatier, also a member of the HiSoMA research team.