In the second half of the 9th century, an important woman dies at the farm now known as Skeiet at Vinjeøra, in central Norway. Her dress is fastened at the front with two large shell-shaped brooches of gilded bronze and a crucifix-shaped brooch, made from an Irish harness fitting. She is then placed in a boat, about seven or eight meters long. Grave goods are also buried along with her body, including a pearl necklace, two scissors, a spindle whorl– and a cow head. 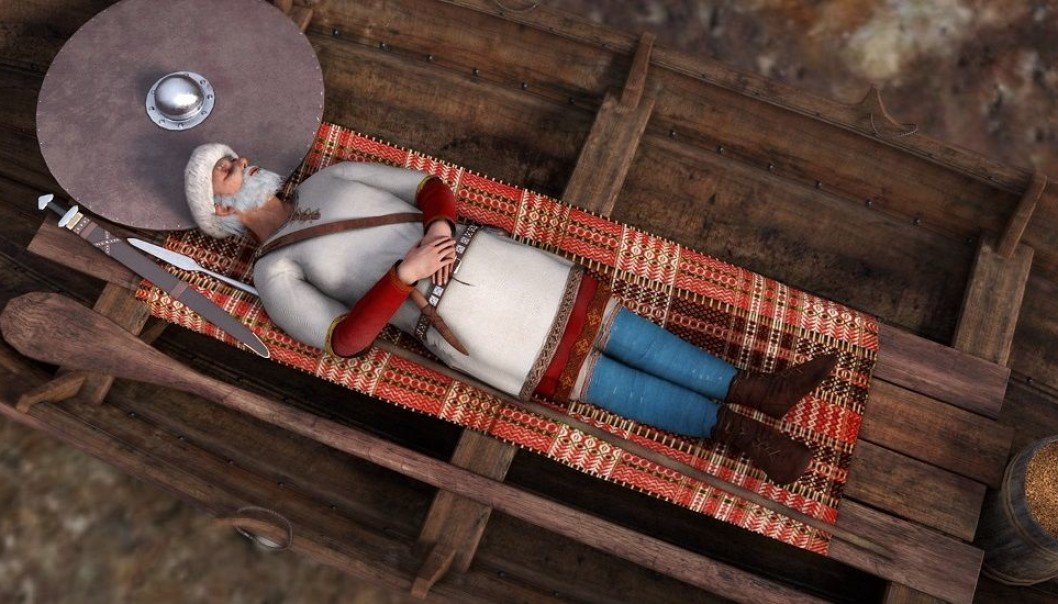 The oldest grave is from the 8th century. But why were they buried together? Illustration: Arkikon

So far, there is nothing extraordinary about this burial ritual. It is only when the boat is buried that the Vinjeøra Vikings do something that will intrigue archaeologists more than 1000 years into the future.

Instead of digging a new grave for the woman, a boat grave from the 8th century is carefully excavated. This is a larger boat, probably between nine and ten meters long. It contains the body of a man buried with weapons. The boat with the woman is gently placed inside the man's boat, and then they are both buried.

Who were the two and why were they buried together, even though they died 100 years apart?

Archaeologists at the NTNU (Norwegian University of Science and Technology) University Museum have been puzzling over this exact question ever since they unearthed the graves in October. The unusual finding was discovered during the excavation of a burial ground of one of the Viking Age farms in this area. The excavations are being undertaken in connection with improvements to the E39 highway.

Nearly all the wood in the boats had rotted away, there was only a little left in the keel of the smallest boat. Still, the boat rivets were still in their original positions, so that by looking at them, the archaeologists were able to determine that they had found two boats in one.

“I had heard about several boat graves being buried in one burial mound, but never about a boat that had been buried inside another boat,” says Raymond Sauvage, an archaeologist at the NTNU University Museum and project manager for the excavation.

But why is the woman's boat put in the old man's grave? source

“I have since learned that a few double boat graves were found in the 1950s, at Tjølling, in the south of the Norwegian county of Vestfold. Still, this is essentially an unknown phenomenon,” he says.

The soil properties at the dig site aren’t good for preserving bones. Archaeologists were consequently extremely excited when they found parts of the skull of the woman in the upper boat grave.

“Hopefully, we will be able to get some DNA from the skull to provide us with more information, such as what she looked like,” says Sauvage.

Isotope analysis can be another source of knowledge about the woman. Isotopes are variants of a particular chemical element that vary between different food sources and geographical locations. Isotope analyses from teeth and skeletons can, therefore, give us information about where a person was born and lived during their life, and about what he or she ate.

The crucifix-shaped brooch in the woman’s grave says a lot about both her and the community she was part of. 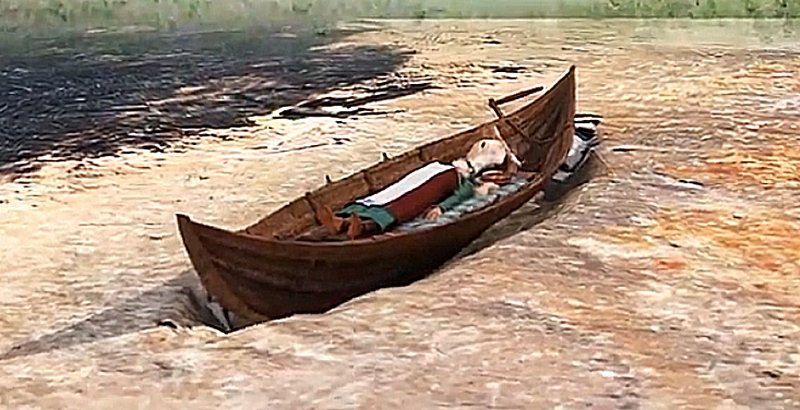 “The decoration and the design itself tell us that it came from Ireland and that it was once part of a harness fitting,” says researcher Aina Heen Pettersen at NTNU’s Department of Historical Studies.

Pettersen is writing a Ph.D. about the significance and use of Irish and British artifacts that were brought to Norway during the Viking Age.

“It was common among the Vikings to split up decorative harness fittings and reuse them as jewelry. Several fastenings on the back of this brooch were preserved and were used to attach leather straps to the harness. The new Norse owners attached a pin to one of the fastenings so it could be used as a brooch.”

Pettersen explains that brooches like these probably were quite exclusive and that they are often found in well-equipped – though not particularly rich – graves.

This suggests that the harness fittings were distributed among people who took part in the Viking voyages or helped organize them.

“The Viking voyages – whether for raids, trading or other expeditions – were central in Norse society. That meant it was important to participate in this activity, not only for the material goods but also to raise both your own and your family’s status,” Pettersen said. 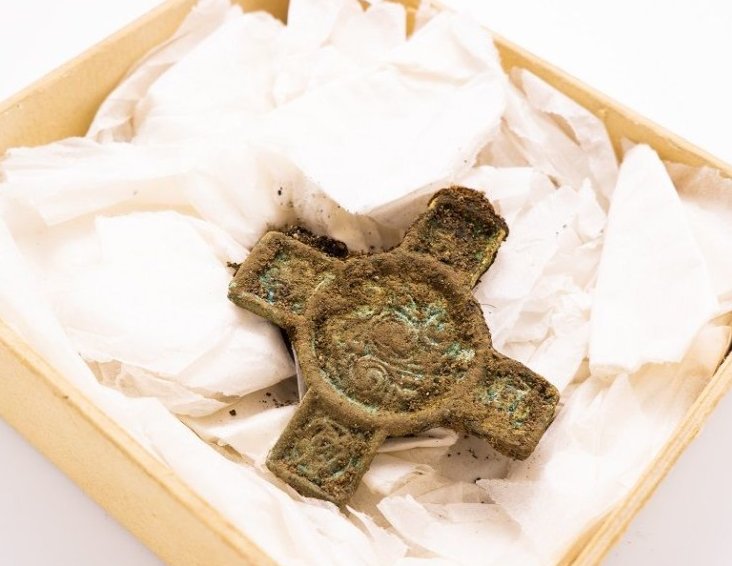 “Using artifacts from Viking raids as jewelry signaled a clear difference between you and the rest of the community because you were part of the group that took part in the voyages."

The man in the larger boat grave was buried with a spear, a shield, and a single-edged sword. These weapons enabled archaeologists to confidently date the grave to the 8th century.

“Sword styles change through the centuries, which means we can unambiguously date this grave to the 8th century, the period that is known as the Merovingian era in Northern Europe. That’s assuming that we are not dealing with a Viking hipster,” Sauvage says with a smile.

But what was the connection between the man and the woman? Sauvage says it's reasonable to assume that the two were related. The Vikings on Vinjeøra probably had a clear idea about who was in each burial mound, since this information most likely was passed down for many generations.

In the second half of the 9th century, an important woman dies at the farm now known as Skeiet at Vinjeøra, in central Norway. Her dress is fastened at the front with two large shell-shaped brooches of gilded bronze and a crucifix-shaped brooch, made from an Irish harness fitting. source

“Family was very important in Viking Age society, both to mark status and power and to consolidate property rights. The first legislation on allodial rights in the Middle Ages said you had to prove that your family had owned the land for five generations. If there was any doubt about the property rights, you had to be able to trace your family to "haug og hedni" – i.e. to burial mounds and paganism,” says Sauvage.

"Against this backdrop, it’s reasonable to think that the two were buried together to mark the family’s ownership to the farm, in a society that for the most part didn’t write things down," Sauvage says.

A monument in the landscape

Two-boats-in-one and interesting grave goods are not the only things that make the archaeologist enthusiastic about this finding. The placement of the two boat graves – at the edge of the largest mound on the burial ground – also tells a story.

“The burial mound must naturally be older than the oldest boat grave, meaning early Merovingian age. This is a fascinating era in Scandinavian history, from which there are few archaeological findings.”

Unfortunately, hundreds of years of farming on the site mean the large burial mound has been completely ploughed away. However, the archaeologists still hope they might find artifacts when this area is further excavated next summer.

“So far, we’ve found part of a brooch from the Merovingian era, indicating that the large burial mound once held a richly appointed woman’s grave,” Sauvage said.