Jan Bartek - AncientPages.com - Last month, scientists announced human footprints believed to date from the end of the last Ice Age had been discovered on the salt flats of the Air Force's Utah Testing and Training Range (UTTR) by Cornell researcher Thomas Urban in forthcoming research.

Urban and Daron Duke, of Far Western Anthropological Research Group, were driving to an archaeological hearth site at UTTR when Urban spotted what appeared to be "ghost tracks"—tracks that appear suddenly for a short time when moisture conditions are right and then disappear again. 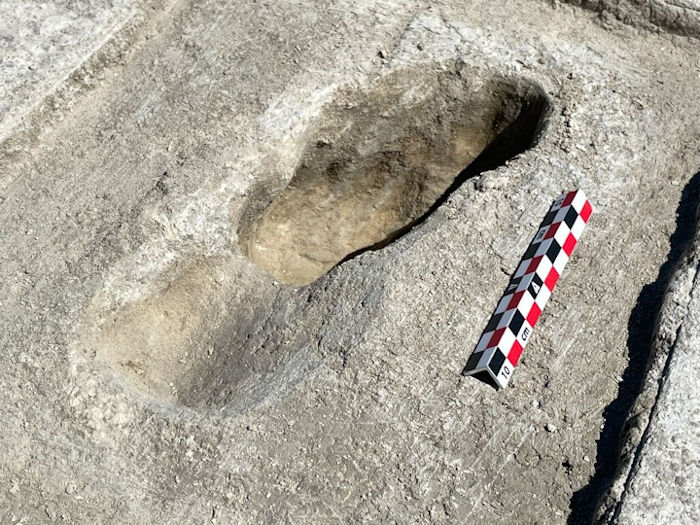 Footprints from the late Ice Age some 12,000 years ago were discovered in the US state of Utah when researchers driving past in a car noticed the distinct depressions in a dried river bed. Credit: Daron Duke

Stopping to look, Urban immediately identified what to him was a familiar sight: unshod human footprints, similar to those he had investigated at White Sands National Park, including the earliest known human footprints in the Americas.

These Ice Age footprints belonging to adults and children are important to archaeologists as they shed new light on North America's earliest human inhabitants. What was life like to the continent's original occupants who lived more than 12,000 years ago just as the frozen planet was starting to thaw?

"We were talking about 'what would they look like?'," Duke told AFP. "And he said: Kind of like that out the window."

"They vary between just looking like discolored patches on the ground and... little pop ups, little pieces of dirt around them or on them. But they look like footprints," Duke said.

What came next was a painstaking few days of very careful digging—sometimes lying on his belly—to ensure that what they were looking at was as old as it appeared.

"What I found was bare feet of people... that had stepped in what looks to be shallow water where there was a mud sub layer," Duke explained.

"The minute they pulled their foot out, the sand infilled that and has preserved it perfectly."

Duke, of the Nevada-based Far Western Anthropological Research Group, had been in the area looking for evidence of prehistoric campfires built by the Shoshone, a people whose descendents still live in the western United States.

He had brought Urban over from Cornell University because of his expertise in uncovering evidence of ancient humans—including the discovery of human tracks in New Mexico's White Sands National Park that are thought to be up to 23,000 years old.

The new fossils add to a wealth of other finds from the area, including stone tools, evidence of tobacco use, bird bones and campfire remains, that are starting to provide a more complete record of the Shoshone and their continuous presence in the region beginning 13,000 years ago. 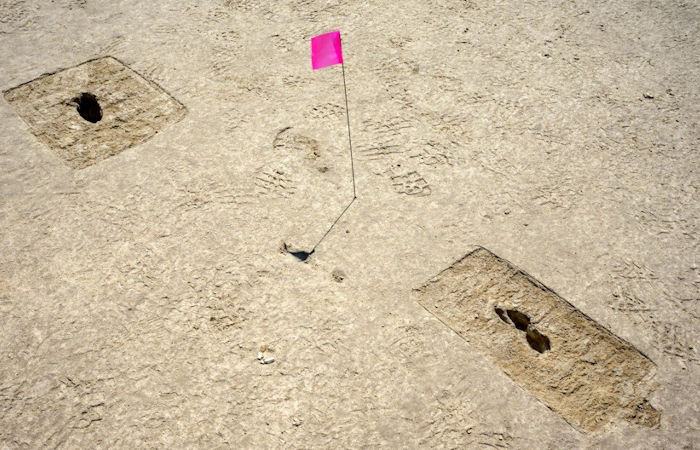 Footprints discovered on an archaeological site are marked with a pin flag on the Utah Test and Training Range. Credit: R. Nial Bradshaw/Provided

For him personally, finding the footprints has been a professional high point.

"Once I... realized I was digging a human footprint, I was seeing toes, I was seeing the thing in immaculate condition... I was just kind of awestruck by it," he said.

"Nothing beats the sense of discovery and awe that maybe as an archaeologist, you are actually chasing your whole career."

And sharing the discovery with the distant descendents of the people who made the prints was immensely rewarding, Urban said.

"You realize the same thing is happening—what the connection is to such a distant past and to something so human, I think it gets to everybody in one way or another eventually."